Pregnancy is a state in which all physiologic, metabolic, and anatomic parameters are altered. In most women, it is a normal physiological state. In some women, pregnancy can itself give rise to a disease. This presents a big challenge to the obstetrician, the laryngologist, and the anesthetist.1-3

A 21-year-old primigravida came to our voice clinic in her 7th postpartum month, with a history of sudden drop in pitch of her voice since 7th month of her antenatal period. During this period, she had also developed masculine physical features including facial appearance and hirsutism. An endocrinologist had already been consulted. Her hormonal tests, such as serum testosterone, dehydroepiandrosterone sulfate, corticosteroid, progesterone, estrogen, luteinizing hormone, and follicular-stimulating hormone were within normal range. A magnetic resonance imaging scan of abdomen had also been done ruling out adrenal gland tumor. She had delivered a baby girl, who was born with a congenital anomaly of clitorial fusion. All her masculine features had resolved after delivery except her hoarseness which persisted.

Her voice quality was low pitched. Stroboscopy revealed a normal amplitude, periodicity, symmetry, and mucosal wave pattern with a fundamental frequency of 110 Hz and range between 101 and 165 Hz.

We have planned a type IV thyroplasty along with an anterior web formation for her after giving a further trial with speech therapy.

A 35-year-old G2P2 who had a history of a tracheostomy performed in her 7th month of second pregnancy was referred to us. Her tracheostomy had been performed which had been attributed to a bilateral vocal fold palsy. She had delivered a full-term normal girl child by cesarean section. On questioning in detail, she gave a history of dyspnea on exertion, hoarseness, and snoring in her childhood for which she had also consulted a pulmonologist and treatment for asthma had been prescribed with not much benefit. Since last 10 to 15 years, it had exacerbated in her first pregnancy and severely worsened in the second pregnancy. There was also a history of hysteroscopy done under general anesthesia with intubation 10 years earlier.

On examination, her voice quality was weak. She had a speaking tracheostomy tube size 7 in situ. Our stroboscopic diagnosis was bilateral immobile vocal folds in paramedian position. A Kashima cordectomy under general anesthesia was planned for her. However, when we took our patient under general anesthesia and performed a microlaryngoscopy, we found a posterior glottic band (Fig. 1). The dilemma in this situation was to decide if the immobility of the vocal folds was entirely due to this band or if she also had bilateral vocal fold palsy.

Thus, we went ahead and performed a laser excision of the band. Following this, palpation of the cricoarytenoid joints did not reveal any fixation. We allowed the patient to come out of anesthesia completely and performed a flexible nasolaryngoscopy. Since the bilateral immobility persisted, we once again anesthetized the patient and performed a unilateral Kashima cordotomy. The tracheostomy made the job of the anesthetist simpler. Corking of the tracheostomy tube was done from the next day. Her voice quality improved and she had no breathing difficulty. The patient was decannulated after 2 months and is under regular follow-up. Her voice is very serviceable and she is comfortable performing her daily activities. 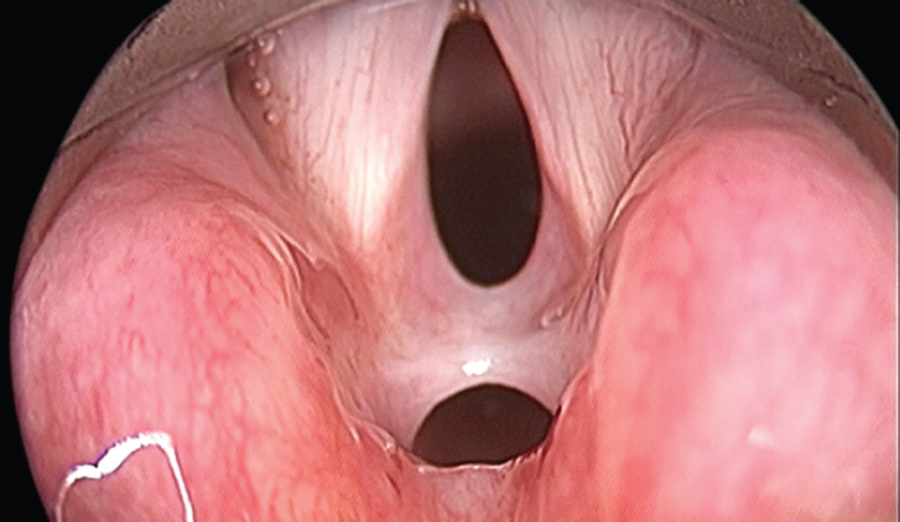 A 30-year-old, obese primigravida came in her 3rd month of pregnancy with a 1-month history of hoarseness. Past medical history was unremarkable. Her voice quality was low pitched and husky. Stroboscopy revealed plump edematous vocal folds with an aperiodic, asymmetrical mucosal wave pattern. Our diagnosis was a grade I Reinke's edema. A thyroid function test revealed hypothyroidism. She was started on thyroxine and her voice improved after 2 weeks.

Pregnancy can give rise to hoarseness because harmonics are hormone dependent. There are changes in voice quality and perturbation rates, mainly seen during the 3rd trimester. Clinically, we find vocal fatigue and reduced mean phonation time. Etiologies for hoarseness include increased circulating female hormones, increased extracellular fluid levels, and laryngopharyngeal reflux. These changes usually reverse in postpartum and so does the voice.1

In the first case, the postulation is that there was a sudden testosterone spurt during pregnancy, which gave rise to male physical features, masculine pitch, and a congenital anomaly of clitorial fusion in the baby girl.4

In the second case, the woman initially was suspected and treated for asthma, which is a common misdiagnosis for patients presenting with dyspnea in 59% of cases noticed by Doshi and Weinberger2 in their case series. Pregnancy poses increased demand along with other physiological changes in respiratory system. Our theory is that the patient already had bilateral immobile vocal folds which had gotten aggravated due to the increased demand in pregnancy, thus giving rise to stridor during the 7th month and necessitating a tracheostomy. We presume the posterior glottic band noticed intraoperatively was most likely due to the intubation trauma following the hysteroscopy. A literature review identified only three cases of pregnant women with airway obstruction due to vocal cord palsy (VCP). Putterman et al3 described a woman with congenital VCP who developed severe respiratory distress early in the third trimester after a bout of bronchitis and required emergency tracheotomy. Her condition remained stable after tracheotomy and elective cesarean section was performed at 38 weeks. Weston and DiFazio5 described a case of a woman with VCP and spinal muscular atrophy, who went on to deliver spontaneously at term. Roslani et al6 described a woman who had undergone total thyroidectomy for papillary carcinoma 17 years back, developed stridor in her 32nd week of pregnancy. Her sonography of pelvis revealed intrauterine growth retardation. Elective tracheotomy and an elective cesarean section were done in the same setting.

Endotracheal intubation can also be difficult depending upon severity of VCP. It can also pose challenges in labor. There is a concern whether the pregnant woman will be able to tolerate the second stage of labor. Elective tracheostomy and delivery by cesarean section are safer options.

During pregnancy, the physiological demand of thyroxine increases. In the third case, the patient presented with hoarseness as the first symptom of hypothyroidism. On starting with thyroxine, the voice improved gradually.

There have been very few case reports of exclusive benign laryngeal lesions during pregnancy. Armstrong et al7 described three women with rhinoscleroma causing marked subglottic narrowing, who also went to term without any difficulty. Werner et al8 described a case report of a 26 weeks pregnant woman with a recurrent supraglottic paraganglioma. She underwent surgical excision in the 2nd trimester. The histological studies failed to confirm that the episodic growth of the paraganglioma may have been induced by estrogen. Almuslim and Alshaikh9 described a case report of laryngeal amyloidosis in a 28 weeks pregnant woman who presented with stridor in pregnancy for which tracheostomy had to be done. Nerurkar et al10 described a case of adult-onset recurrent respiratory papillomatosis in a woman aggravated by pregnancy. She was managed by debulking with a laryngeal microdebrider followed by microflap surgery.

There have also been very few cases of pregnant women with extensive concurrent laryngeal malignancy presenting with breathing difficulty and hoarseness. Matschke et al11 described squamous cell carcinoma of vocal fold with extralaryngeal spread in a 28 weeks pregnant woman. Soliman et al12 described a unique case of non-Hodgkin's lymphoma of thyroid gland with hoarseness and dysphagia in a 30 weeks pregnant woman. She received three cycles of chemotherapy before induction of labor at 36 weeks of pregnancy and three cycles after delivery giving rise to favorable result. Vannucchi et al13 did a case study on 123 women with differentiated carcinoma of thyroid. They came to the conclusion that pregnancy had a negative impact on the outcome of thyroid cancer because of the presence of estrogen-related alpha receptor in majority of thyroid tumors diagnosed during pregnancy. Poorer outcome was due to estrogen-mediated growth stimulus. Nishihori et al14 described a pregnant woman at 12 weeks with well-differentiated liposarcoma of the hypopharynx, which was removed by an intraoral approach.

The simultaneous occurrence of cancer and pregnancy is associated with much concern, since the decision regarding treatment of the mother has a direct consequence on the fetus. A relationship between immune function and reproductive hormones is well established and may also influence the development of cancer in pregnant women.15,16 Some speculate there is a connection between the physiological state of immunosuppression during gestation and the aggressive nature of these tumors.17,18 When cancer is diagnosed during pregnancy, the mother faces a difficult choice between treating the cancer at once, having a termination, or risking both her and her unborn child's life, to choosing to wait until the baby is delivered. Close interdisciplinary cooperation is required between the otorhinolaryngologist, obstetrician, oncologist, and anesthesiologist. A team approach always gives best results.

Hoarseness and stridor in pregnancy must always be carefully investigated keeping in mind the various differential diagnoses of benign and malignant laryngeal lesions. Multidisciplinary approach must always be encouraged. This will help in giving a better prognosis and successful outcome.