The major controversy is focused on whether the lesion is neoplastic or reactive.

The situation becomes difficult for the surgeon, especially in conditions where the initial biopsies show a benign nature of the tumor and is clinically in discordance with the symptoms and signs of presentation of the patient.

A 75-year-old male patient, who is a retired school headmaster, presented to the casualty of ear, nose, and throat department in stridor. He developed difficulty in breathing, which was insidious in onset and gradually progressed over a period of 5 months. He also had significant weight loss in this period.

Emergency tracheostomy was done. Later, the patient was subjected to a direct laryngoscopic biopsy. In the first biopsy, features were suggestive of reactive fibroblastic proliferation with atypia (Fig. 2).

Preoperative VLS finding in the patient showing ulceroproliferative mass covered with slough, occupying the supraglottis and completely obscuring the view of laryngeal inlet 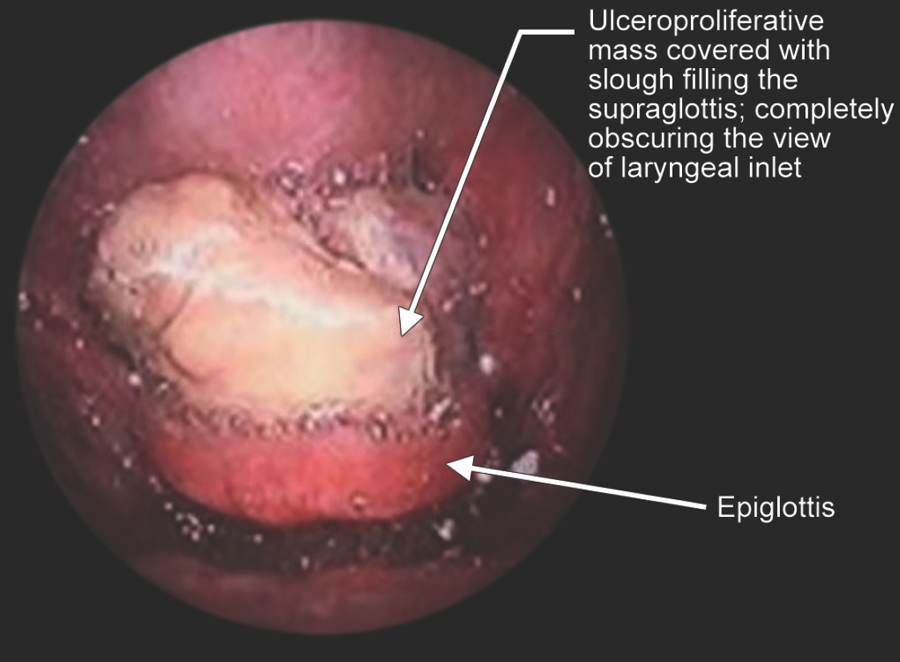 Loosely arranged fascicles and bundles of thin elongated-to-plump spindle cells. Few of them show nuclear enlargement and atypia. There is tissue edema and inflammatory infiltrate suggestive of reactive fibroblastic proliferation with atypia 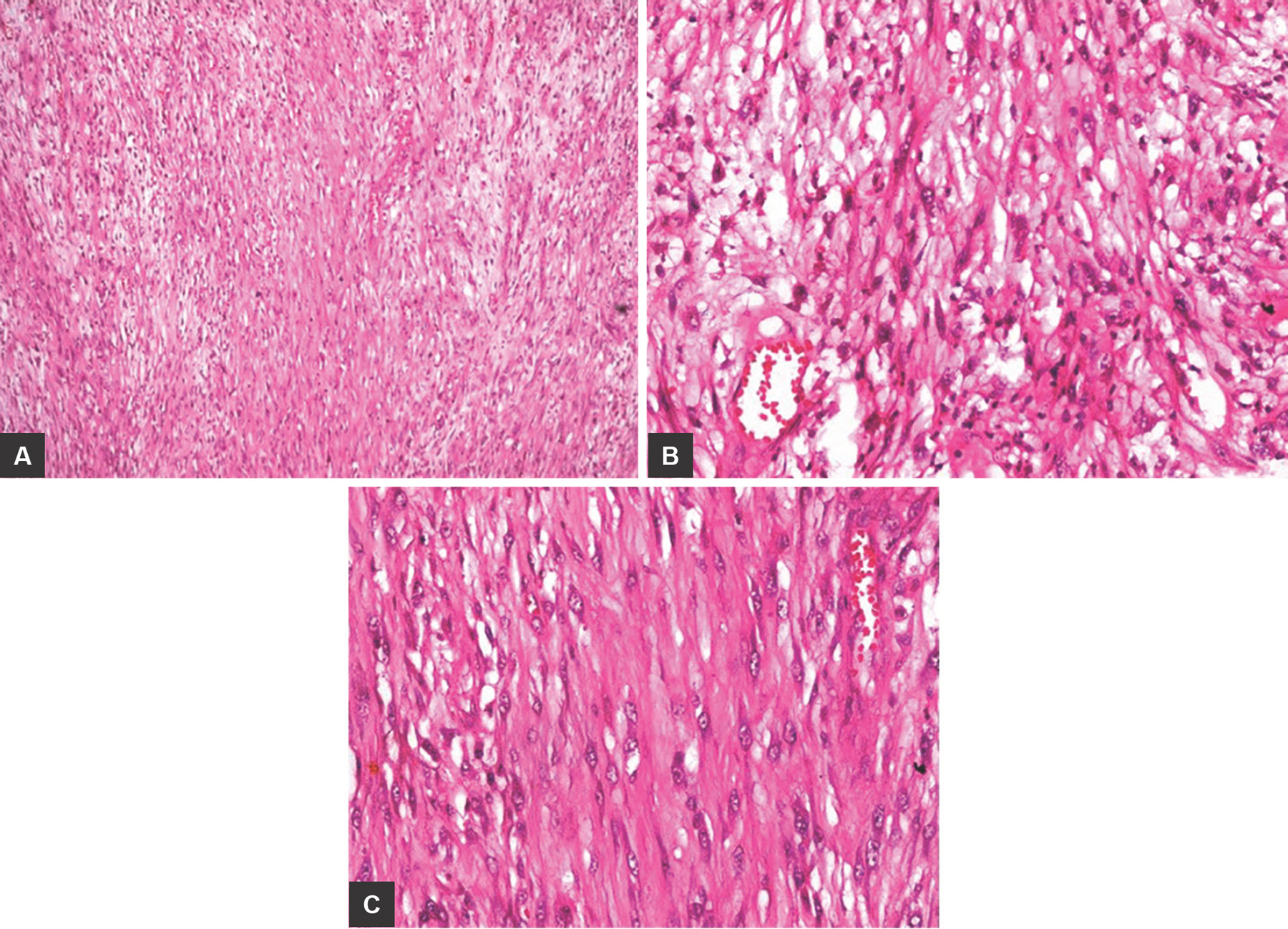 This diagnosis was in discordance with the clinical presentation of the patient and the nature of the mass, so biopsy was repeated. This biopsy features were suggestive of atypical spindle cell nodule. The IHC study was performed and it did not suggest malignancy and was in favor of reactive process with nonspecific inflammation and fibrosis. Biopsy was repeated 4 months later. This time, the histopathological examination (HPE) report was suggestive of well-differentiated squamous cell carcinoma (SCC). Considering the clinical condition of the patient, direct laryngoscopic examination findings, and HPE report, total laryngectomy was planned and executed (Fig. 3).

No further treatment in the form of radiation or chemotherapy was advised as it is a benign lesion.

Immunohistochemistry of the specimen

Follow-up of the patient until date from the time of surgery i.e., for 11 months, remains unremarkable and the patient has put on weight.

The lesions may be soft or firm depending on the amount of the fibrous and myxoid components.

On microscopic examination, these lesions are characterized by presence of proliferation of spindle- to stellate-shaped cells often like a “tissue culture like appearance,”9 reminiscent of nodular fasciitis. The cells lack cytological atypia and have bipolar or stellate-shaped cytoplasmic process. The cells are widely separated and haphazardly distributed in a myxoid stroma composed predominantly of hyaluronic acid. Mitotic figures (MF)are present usually fewer than 1 to 2 MF/10 high-power field (HPF).10 A mixed inflammatory infiltrate composed of lymphocytes, plasma cells, eosinophils, and occasional mast cells is usually conspicuous. 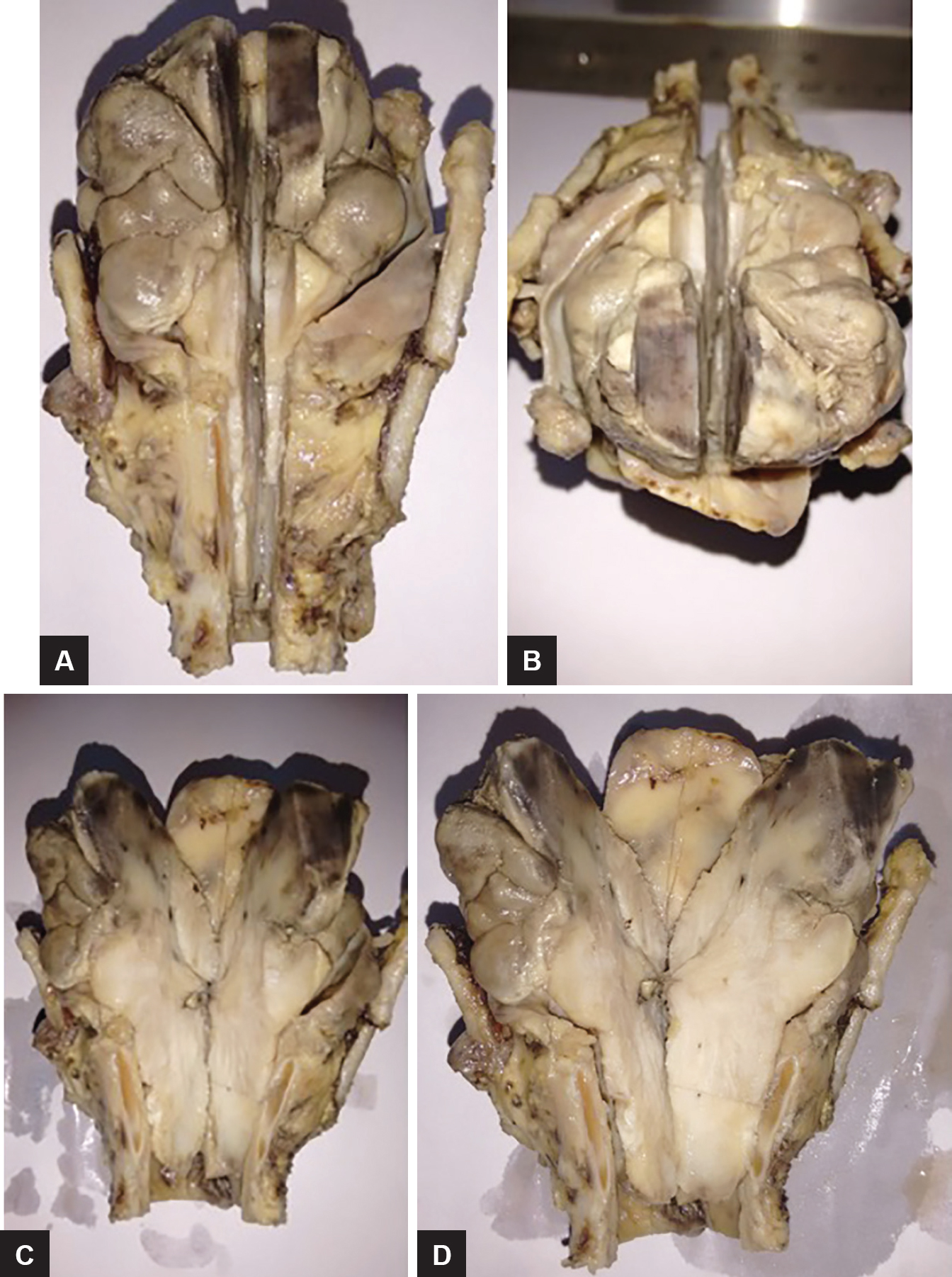 Some cases have histological features that cause great concern for malignancy. Some have brisk MF of 20 MF/10 HPF.10

Immunohistochemically, the spindle cells stain strongly for vimentin, muscle-specific actin, SMA, and desmin. In addition, many cases show focal or often diffuse staining for cytokeratin.11-13 Significant amount of lesions also shows staining for ALK (our case is negative for ALK). However, the malignant transformation is independent of ALK expression.

The IMFT is an enigmatic lesion composed of myofibroblastic spindle cells with an inflammatory infiltrate of plasma cells, lymphocytes, and eosinophils.14 They are typically smooth, polypoidal, or nodular with a fleshy-to-firm consistency. They range from 0.4 to 3.5 cm. Histologically, they consist of inflammatory cells and spindle—fibrous components. They present clinically with hoarseness of voice, infrequently with foreign body sensation in throat and with airway compromise. Sometimes, they may present with associated constitutional symptoms like fever, impaired growth, weight loss, and malaise. Coffin et al15 described 12 cases of head and neck IMTs among 84 extrapulmonary IMTs, and only 3 were located in the larynx. One problem for surgeons is the lack of a line of demarcation surrounding the lesion. Radical surgery is reserved for more aggressive cases. However, a total laryngectomy was necessary only in one of all IMTs reported. Some patients profit from corticosteroid and nonsteroidal anti-inflammatory treatment.

Clinically, IMT can mimic a neoplastic process. Patients suffer from hoarseness, dysphonia, or foreign body sensations in the throat. Constitutional or systemic signs (fever, weight loss, anemia) are usually missing in extrapulmonary IMTs. Systemic alterations have only been reported in one laryngeal IMT.16 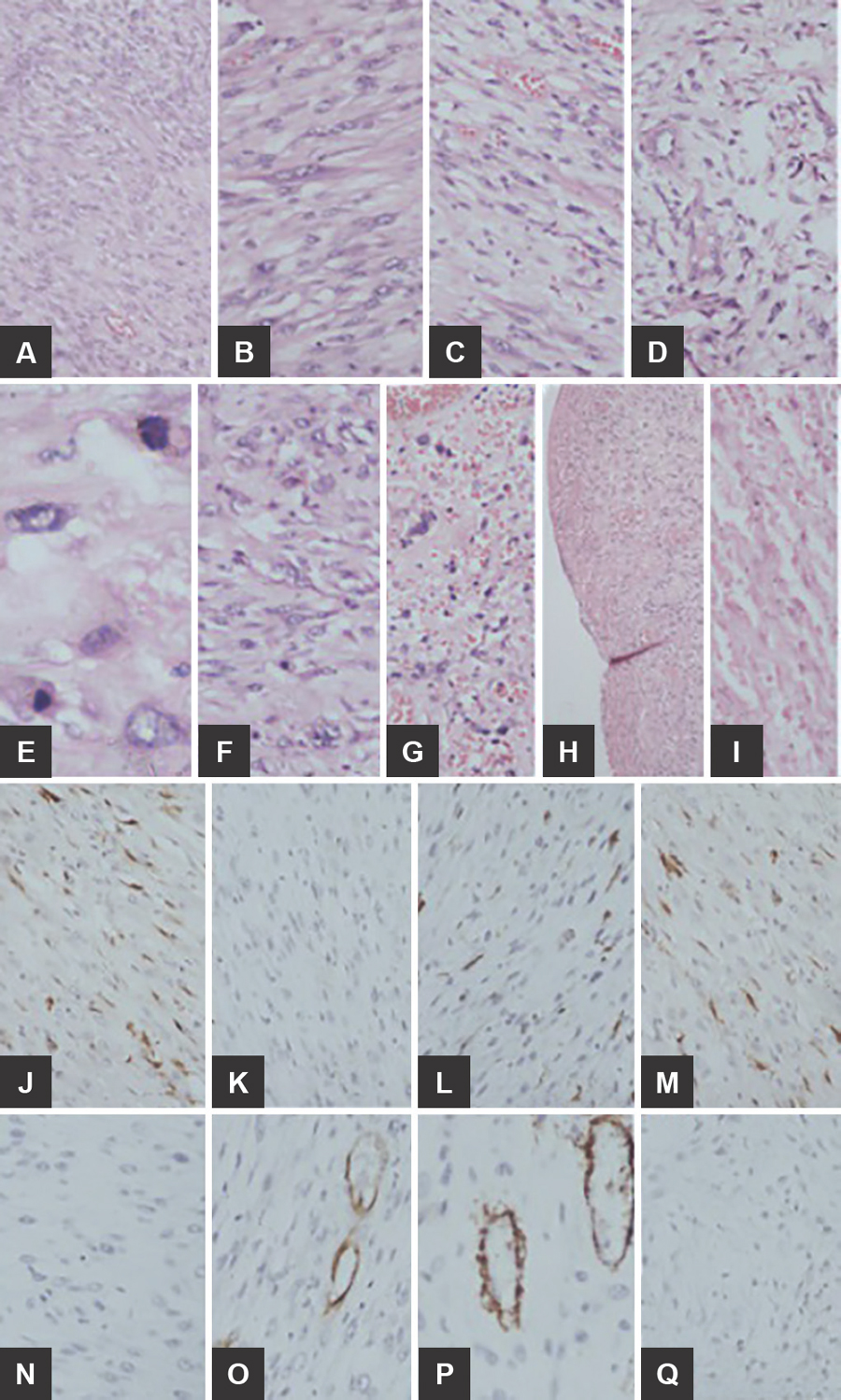 The diagnosis of IMTs can be difficult due to the wide morphological spectrum. Coffin et al15 have described three morphologic patterns:

Spindle cell carcinoma (SPC) is also an important differential diagnosis. But, if the diagnosis cannot be made based on conventional histomorphology, it becomes even more difficult. Typically, SPCs contain pleomorphic malignant spindle cells with mitoses (including atypical mitoses). Most of them are associated with epithelial dysplasia or common SCC. However, IHC will differentiate SPC from IMFT (SPC: Cytokeratin and vimentin positive, ALK-1 negative vs IMT: ALK-1 and vimentin positive, cytokeratin negative). Problems arise in an ambiguous staining pattern — SPCs express cytokeratins only in 40 to 85% and IMTs in up to 75%.

The reason behind doing an IHC technique in such cases is to arrive at a diagnosis if the lesion is benign or malignant, as it is ambiguous on a conventional histopathology. However, it was difficult in making a final diagnosis even after staining with a panel of IHC markers in our case.

Atypical spindle cell lesion of the larynx is a rare condition, which mimics malignancy. The reason for discussing this condition is to highlight the difficulty the pathologist faces in reaching a diagnosis and the surgeon in making a decision between conservative techniques and radical surgical procedures. In our case, the lesion was huge as compared with a benign lesion, and the clinical condition of the patient was suggestive of a malignant condition, with one of the biopsy HPE reports suggestive of well-differentiated SCC. Total laryngectomy was performed.