Laryngeal tuberculosis is the most common granulomatous disease of the larynx usually considered to be the result of pulmonary tuberculosis. However, the larynx may be involved without any pulmonary involvement1-5 and cause symptoms like hoarseness, dysphagia,6-8 breathlessness, anorexia, and weight loss with or without dry cough.

Often, laryngeal tuberculosis poses a diagnostic challenge because of the nonspecific complaints and physical findings especially in the immunocompromised patients. In the presence of acquired immunodeficiency syndrome, the clinical presentation becomes confusing.9 Also, in the Indian scenario, very often, with an associated history of oral habits like tobacco intake, smoking, etc., laryngeal tuberculosis mimics a malignant lesion of the larynx.

Hematogenic and lymphatic spreading of Mycobacterium tuberculosis may result in a tubercular granuloma anywhere in the larynx.10 The infection begins with exudation in the subepithelial space followed by round cell infiltration and heals with fibrosis in laryngeal tuberculosis.11 Fibrotic changes in the lamina propria of the vocal folds affect the vibratory pattern and quality of voice.

With a proper course of antitubercular therapy, successful treatment of laryngeal tuberculosis can be achieved. Despite this, an irreversible change of voice quality has been noted in such patients.12

The aim of this study is to investigate the changes in the vibratory function of the vocal cords in two diagnosed cases of tuberculosis during and after completion of treatment.

A 56-year-old male presented with a 2-month history of cough, hoarseness of voice, difficulty in swallowing, weight loss, and evening rise of temperature. There was associated history of tobacco and betel nut intake. Hoarseness was allegedly precipitated by an episode of vocal abuse as he was a political party worker. On examination, indirect laryngoscopy showed a whitish patch in the left vocal cord with restricted mobility of the left vocal cord causing a phonatory gap. There was no involvement of arytenoids or interarytenoid region. The aryepiglottic folds appeared congested and edematous. Fiber-optic laryngoscopy correlated with the laryngoscopic findings, while the stroboscopic picture at the initial presentation showed that there was a whitish lesion in the left vocal cord, and the adduction of the left vocal cord during phonation was partly restricted. The left true and false cords were edematous, the free edge of the left cord was nonlinear, and loss of vibrations were found in the left true vocal cord. The glottic closure was incomplete during phonation.

Computed tomography scan and chest X-ray showed bilateral lesions in both lung fields. The bacteriological examination of sputum was carried out, which was negative for acid-fast bacilli (AFB). Microlaryngeal surgery was done for collecting biopsy specimen, which showed a chronic inflammatory process with granuloma and AFB. Antitubercular treatment consisting of Isoniazid, Rifampicin, Pyrazinamide, and Ethambutol was given for a period of 6 months. The patient was assessed at the end of 2 months of treatment symptomatically and clinically with fiber-optic laryngoscopy and stroboscopy.

At 2-month follow-up, the whitish lesion in the left vocal cord was completely resolved. However, the involved cord remained spindle shaped, and a phonatory gap persisted. The voice of the patient at this stage was breathy in quality. At the completion of treatment in 6 months, there was an increase in the horizontal movement of the involved cord with adequate glottis closure.

The patient's voice was near normal at this stage; hoarseness and breathiness were no longer noted.

A 50-year-old female patient presented with complaints of hoarseness of voice for 3 months duration not associated with any cough, difficulty in swallowing, fever, weight loss, or breathlessness. She gave a history of overuse of voice as she was a nursing matron in a district civil hospital. There was a history of chewing betel nut for more than 30 years. On examination by indirect laryngoscopy and fiber-optic laryngoscopy, a thick whitish patch was noted in the right vocal cord with no supraglottic or subglottic extension (Fig. 1). There was generalized congestion and edema of the larynx, and stroboscopy before the initiation of therapy showed a rough lesion in the right vocal cord. The vibrations of the involved cord were also sluggish resulting in an irregular gap on vocal cord closure. Mucosal wave was markedly decreased. Chest X-ray was normal, but the patient was hepatitis B positive. Under all protection, microlaryngeal surgery was done and specimen was sent for histopathology, bacteriology, and AFB staining. The histopathology showed epithelioid cell granulomas, Langhans giant cells, and lymphocytes surrounded by stratified squamous epithelium. A positive AFB staining confirmed the presence of the bacilli. On this basis, it was confirmed to be a case of laryngeal tuberculosis and antitubercular treatment consisting of Isoniazid, Rifampicin, Pyrazinamide, and Ethambutol was given for a period of 6 months. The patient was assessed at the end of 2 months of treatment symptomatically and clinically with the fiber-optic laryngoscopy.

On 2nd month of antitubercular therapy, stroboscopy did not reveal the rough lesion though the vibrations continued to be asymmetrical and diminished. However, mucosal wave was near-normal. Voice at this stage was asthenic.

On 6th month follow-up, the fiber-optic laryngoscopy did not show any white lesion (Fig. 2). The vocal cord vibrations and mucosal wave returned to near-normal and patient appreciated subjective improvement in voice quality.

The availability of quick diagnostic tools for tuberculosis and recent advances in antitubercular therapy have caused a definite decrease in the incidence of tuberculosis. However, the demographic profile of tuberculosis has undergone a change owing to the recent emergence of acquired immunodeficiency syndrome or immunosuppressive diseases and widespread use of corticosteroids.1,10 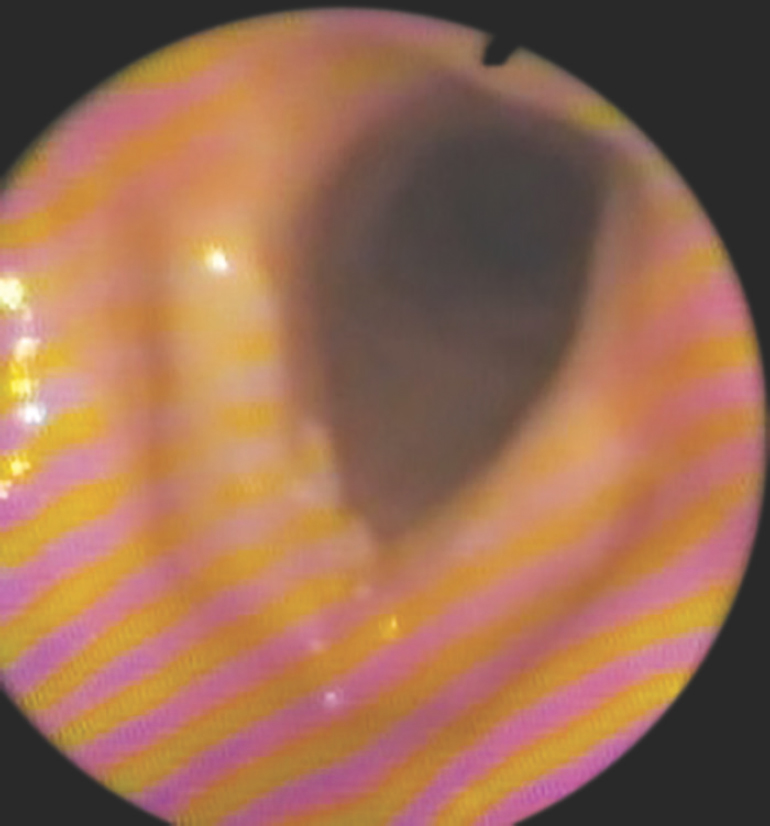 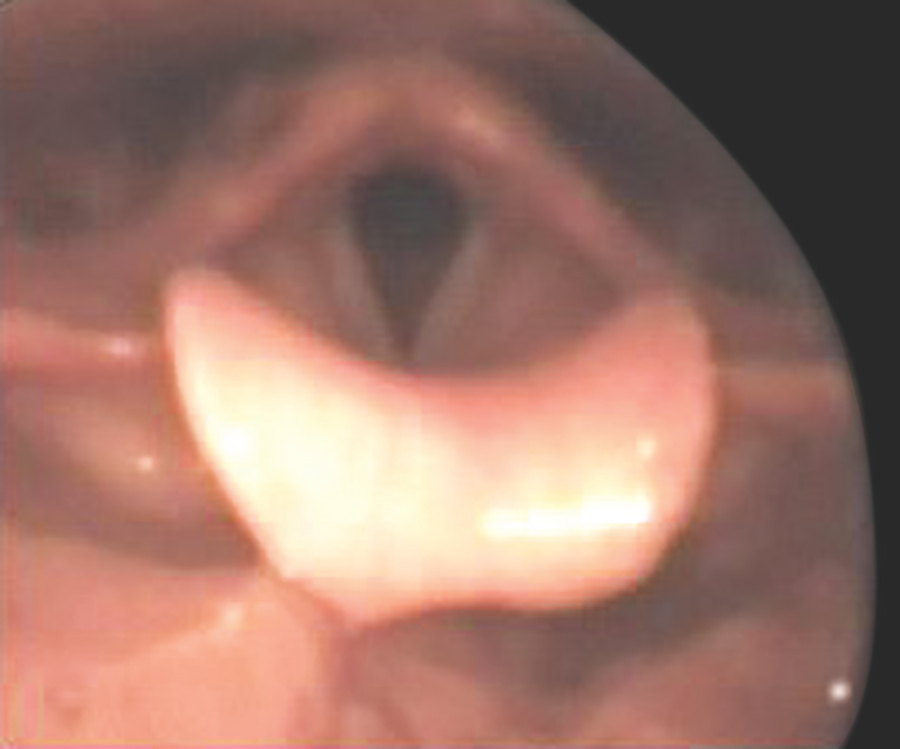 Laryngeal tuberculosis has become an important entity in the diagnostic spectrum of laryngeal lesions.

The most common sites of laryngeal tuberculosis are interarytenoid region, the arytenoid cartilages, the posterior surface of the true vocal cords, and the laryngeal surface of the epiglottis.13,14 In the present two cases, both the lesions were restricted to unilateral vocal cord superior surface without involving any other area of the larynx. However, in both the cases, the supraglottic laryngeal mucosa showed marked congestion, which is similar to that observed by Singh et al.9

In a study of tubercular laryngitis in 14 patients, Ozüdogru et al12 had observed that glottal closure presented an irregular shape during treatment, and later became spindle shaped along its entire length. They had also noted the absence of mucosal wave in the posttreatment period, which is contrary to our finding of a normal mucosal wave and normal glottal closure after completion of treatment. Lim et al15 had observed that early initiation of antitubercular therapy gave better outcome in terms of mucosal wave and voice quality. In both the present cases, the normal glottis closure and mucosal wave after completion of treatment may be attributed to the early initiation of treatment. Hirano and Bless16 had attributed voice quality largely to glottal closure. Levenson et al7 had reported only erythematous and edematous appearance of vocal cords, which is similar to the present cases where erythema and edema of the supraglottic larynx were noted.

In cases of laryngeal tuberculosis, the granulomatous reaction that ensues decreases the subepithelial space and heals with fibrosis.11 This causes a change in quality of voice as a result of effect of sliding movement of bilateral vocal cords. In the present two cases, at the end of treatment, no significant fibrosis was noted and the vibratory function was normal.

In the present report, both the cases were of type III.

Laryngeal tuberculosis may present with nonspecific symptoms and varied clinical appearance. For a desirable outcome of vibratory function of the vocal cords, early recognition of the disease and initiation of treatment are necessary.