Vocal fold polyps are among the most common benign lesions of true vocal folds, which require surgery.1 Vocal polyps are usually solitary arising from the edge of the vocal folds.2 Phonotrauma is an important etiological factor for vocal fold polyp. Phonotrauma includes vocal overuse, which is seen in voice-demanding professionals, in vocal abuse, or in work environments that are noisy.1 Voice abuse is characterized by forced voice production due to strain in the head, neck, and shoulder region producing a hoarse quality of voice.3 In professional voice users, varix or capillary ectasia occurs due to microtrauma, which leads to neoangiogenesis and subsequent microhemorrhage into the superficial lamina propria.4 These lead to localized edema, which later organizes to a hyalinized stroma, presenting as a polyp.5 Vocal fold polyps occur more in males in the age group of 30 to 40 years.6 In addition to the acute insult to the vocal folds, smoking, laryngopharyngeal reflux, and anticoagulant therapy predispose this condition among those who abuse or misuse voice. Vocal fold polyp usually causes varying degrees of hoarseness and vocal strain, thus interfering in day-to-day activities. In professional voice users, there may be pitch break and loss of range along with breathy or a hoarse voice. About 80% of vocal fold polyps are unilateral, occurring on the free edge or the undersurface of the vocal fold at the anterior or middle third; 20% are bilateral or multiple.1

The voice handicap index-10 (VHI-10) is easily self- administered and scored, quickly at the time of evaluation while preserving the original VHI's utility and validity.7 The aim of the research was to analyze the improvement in quality of voice in terms of VHI among those who underwent microlaryngeal surgery for vocal fold polyp.

To study the outcome of microlaryngeal surgery for vocal cord polyp on quality of voice with VHI-10.

Microlaryngeal surgery for vocal fold polyp will improve the quality of voice.

All the patients who underwent microlaryngeal surgery for vocal fold polyp in the senior author's voice clinic from March 2016 to August 2016 were included. Those who were not willing for giving consent and those with other coexisting laryngeal pathologies were excluded from the study. All the patients were asked to fill up a preoperative survey, a self-reporting questionnaire with 10 questions (VHI-10). All the patients underwent microlaryngeal surgery for vocal fold polyp with mini-microflap technique. These patients were again given the same questionnaire 6 weeks postsurgery when they were called for follow-up.

All the patients were assessed with a self-reporting questionnaire, VHI-10, preoperatively and 6 weeks postoperatively. The VHI-10 consists of 10 entries, and patients have to score each problem with the appropriate option representing the frequency of occurrence for each problem: 0 for “no”; 1 for “rarely”; 2 for “sometimes”; 3 for “regular”; and 4 for “always.” The VHI-10 score is the sum of the score of 10 entries, which range from 0 to 40 points. The higher the VHI-10 score is, the more serious is the subjective assessment of patients on quality of voice.

The results were subject to statistical analysis with software Statistical Package for the Social Sciences 22.0.0 version. Data were expressed as mean ± standard deviation. Paired t-test was applied for statistical significance.

A total of 36 patients in the age group of 25 to 82, with a mean age of 44.67 ± 0.34 years, were included in the study. The maximum number of patients were in the age group 31 to 50 (Graph 1). Out of these 36 patients, 27 were males and 9 females. A total of 22 (61%) patients had right-sided polyp and 14 (39%) had left-sided polyp. The majority of the patients were voice professionals, with the maximum number being teachers followed by businessman, advocate, priest, supervisors, doctors, executives, driver, housewife, and one retired employee (Graph 2). Two housewives and one retired employee had voice overuse as they have small kids at home. Mean VHI-10 preoperatively and postoperatively was compared. The mean preoperative and postoperative VHI-10 was 30.36 ± 6.42 and 1.11 ± 1.76 respectively (Table 1). The reduction in preoperative and postoperative scores gave a p-value of <0.05 at a confidence interval of 95%.

In our study, the majority of the patients were in the age group of 31 to 40 and 41 to 50 (12 patients each). In a study by Reddy et al8 on 50 patients with vocal fold polyp and another study by Mehta et al9 on 50 patients, it was shown that the maximum number of patients were in the age group of 31 to 40, which is followed by the 41 to 50 age group (Table 2). This is the most active and productive period of life — involved in various social, economics, and professional work.

In all the studies, the prevalence of vocal fold polyp is more for males; the reason is that males may be overusing or abusing their voice more for professional or personal needs.

Distribution of patients based on age and sex 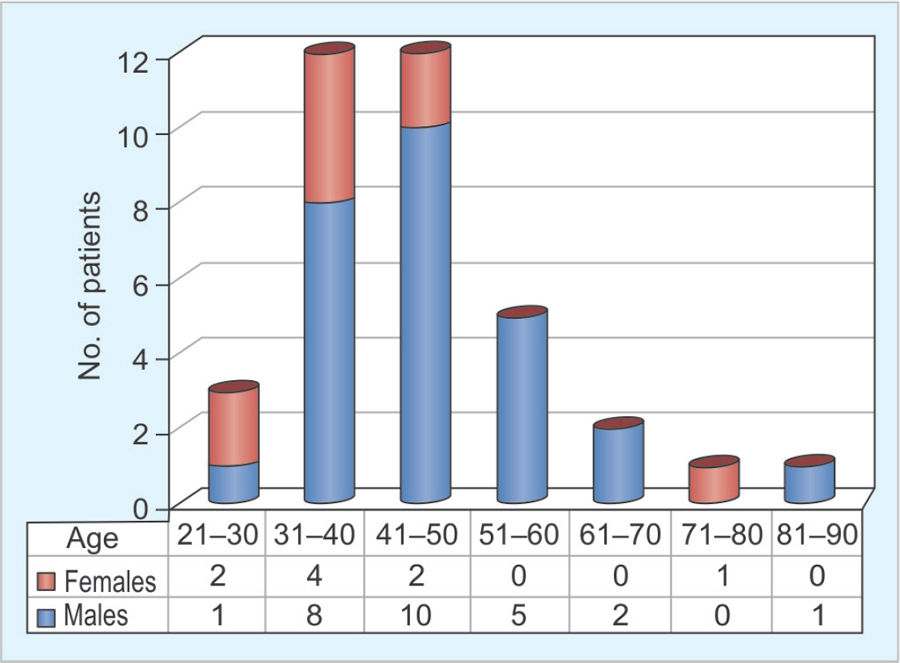 Distribution of patients based on profession 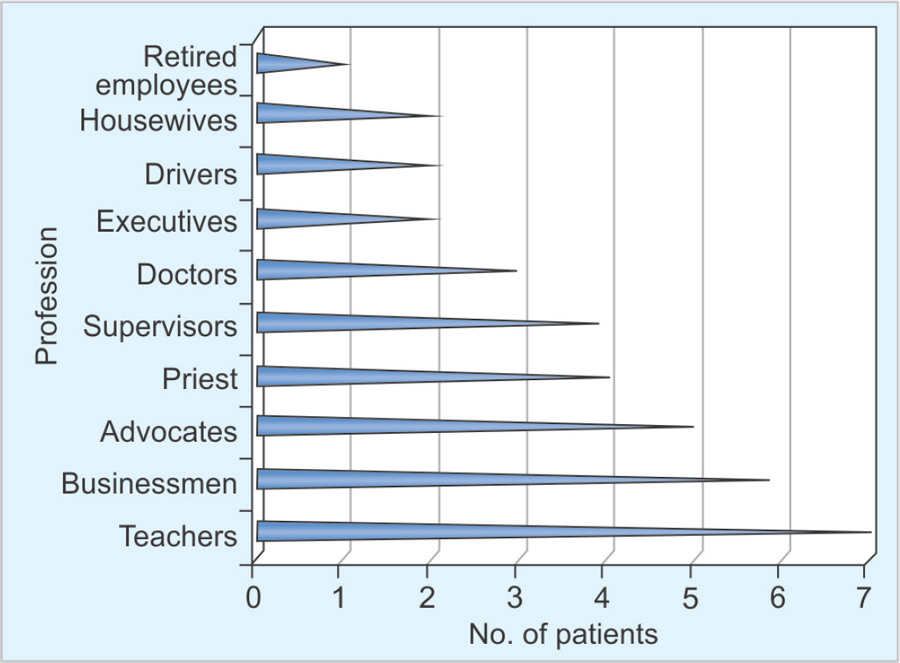 Comparison of preoperative and postoperative VHI-10

In our study, the majority of the patients were professional voice users (Graph 2). Out of the 36 patients, 7 were teachers followed by businessmen (6), advocates (5), priests (4), supervisors (4), doctors (3), executives (2), drivers (2), housewives (2), and a retired employee (1). Among the 4 priests, 2 were using Arabic language for preaching. Among the supervisors, 3 were in construction field and one in the airport. Both the places have a lot of background noise, which inevitably leads to voice abuse. Both housewives and one retired employee confessed of voice abuse at home, as they had small kids at home.

When we compared the outcome of our microlaryngeal surgery for vocal fold polyp on quality of voice using VHI-10, almost all the patients regained normal voice (Table 3). The normative value of VHI-10 is 2.83.10 In our study, the mean postoperative VHI-10 was 1.1 ± 1.76 with a p-value of <0.005 at a confidence interval of 95% when comparing it with the preoperative VHI-10, which implies a normal value postmicrolaryngeal surgery.