The laryngopharyngeal reflux is defined as the reflux of gastric contents into the larynx and pharynx (Vakil et al).1 The LPR may be manifested as laryngeal symptoms, such as cough, sore throat, hoarseness, dysphonia, and globus, as well as signs of laryngeal irritation at laryngoscopy.2

In 1979, Pellegrini et al3 were the first to document links between airway symptoms and reflux of gastric contents. They also proved that treatment of reflux disease results in elimination of these airway symptoms.

The LPR is a term used since 1996 by Koufman et al4 to designate symptoms, signs, or tissue damage resulting from the return of gastroduodenal contents into the upper aerodigestive tract.

In recent years, it has become apparent that stomach acid is only a part of the equation. Research suggests that the stomach enzyme pepsin plays a crucial role in the complex mechanism behind LPR.5,6

Laryngopharyngeal symptoms can lead to symptoms, such as dry cough, throat clearing, posterior discharge, dysphonia, difficulty swallowing solids or liquids or episodes of asphyxia, heartburn, or regurgitation. So, it is important for the ear, nose, and throat (ENT) specialists to identify the signs and symptoms of LPR and treat them accordingly.

This is a study of 111 patients who presented to the ENT outpatient department at the Civil Hospital Ahmedabad, India, from April 2015 to April 2016 with laryngeal complaints like change of voice, cough, difficulty swallowing, foreign body sensation, throat clearing, regurgitation, etc. After 7 patients (4—laryngeal malignancy, 3—vocal cord palsy) were excluded from the study, the remaining 104 patients were evaluated with 90° endoscope by a single examiner after spraying the throat with LOX 10% spray.

We used the symptom questionnaire and classification proposed by Belafsky et al7 to grade the signs and symptoms of LPR.

The reflux finding score ≥7 is suggestive of LPR (Table 2).

Reflux symptom index: During the last month how did the following problems affect you?

Predominant laryngeal complaints encountered in our study were cough and change of voice (Graph 1). 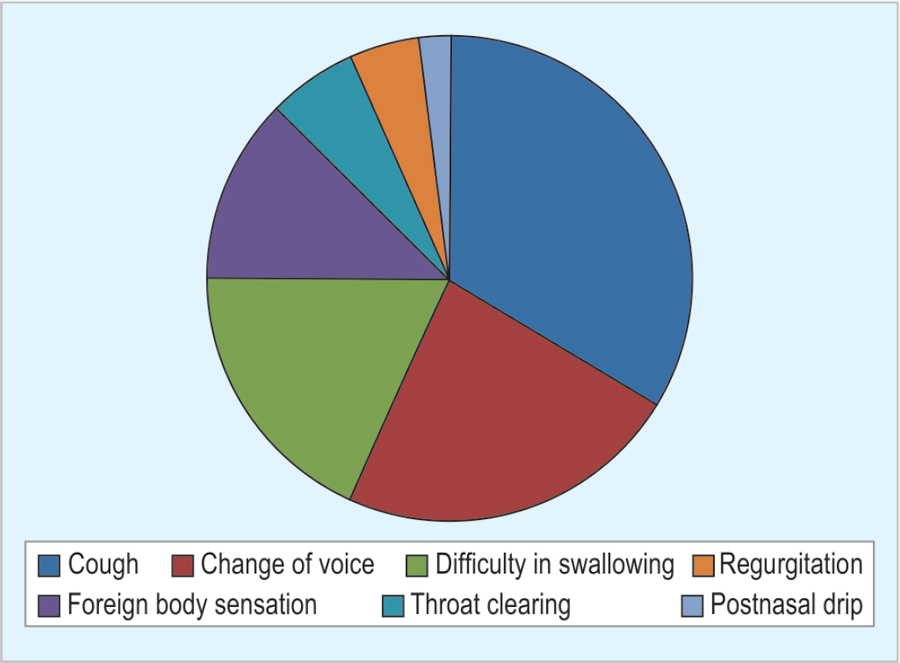 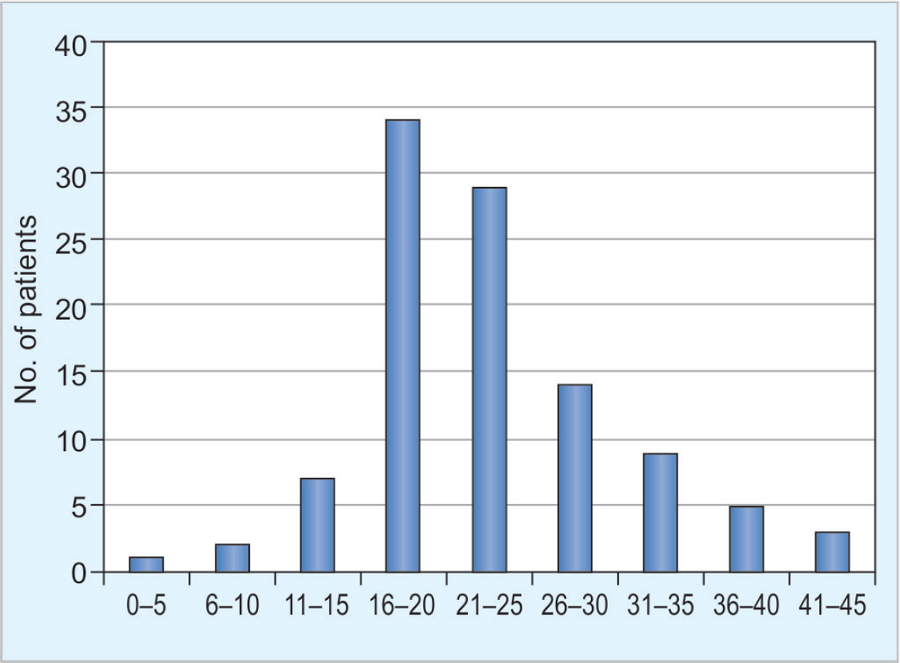 The RFS ranged from 4 to 22, with a mean of 11.04 and SD 3.07. Only 5 patients with RSI ≥13 had RFS < 7. The most common findings on endoscopy of patients with LPR were arytenoids, hyperemia, and posterior commissure hypertrophy (Graph 3). 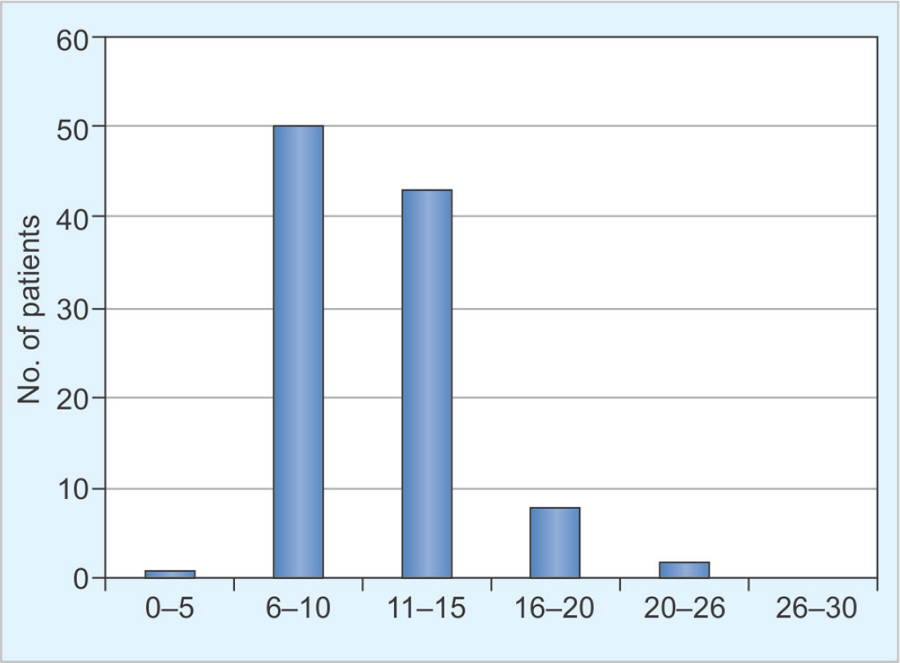 The LPR refers to the retrograde flow of gastric contents to the upper aerodigestive tract. There are various physiological barriers to prevent LPR, such as the lower esophageal sphincter, esophageal clearance influenced by esophageal peristalsis, saliva and gravity, and the upper esophageal sphincter. When these barriers fail, stomach contents come in contact with the laryngopharyngeal tissue, causing damage to the epithelium, ciliary dysfunction, inflammation, and altered sensitivity.8 In our study of patients with laryngeal complaints, the mean age of patients with laryngeal complaints was 47.2 years. The male-female ratio was 1:1.8. The RSI and RFS had a correlation coefficient of 0.98.

Various tests are available for diagnosing and documenting LPR. However, there remains wide divergence among specialists on the diagnosis of LPR.

Reflux events are best demonstrated by multichannel intraluminal impedence pH monitoring. This method can detect acid and nonacid or gaseous fluid.9 Multichannel intraluminal impedence pH monitoring is useful for the diagnosis of LPR, but the methods tested vary widely and there is no consensus regarding the definition of abnormal pH.10 The process is also invasive and results are variable.

In view of controversial diagnostic criteria for LPR, empirical treatment with proton pump inhibitors (PPIs) has been used as an alternative diagnostic modality in which a favorable response is defined as diagnostic confirmation.10,11

The laryngoscopic findings used for the diagnosis of reflux are nonspecific signs of laryngeal irritation and inflammation. The laryngeal examination identifies edema and erythema, particularly in the posterior region as signs of LPR. However, the examination depends on the examiner; variations may exist that make the precise diagnosis of LPR highly subjective.12

In our study, RSI and RFS showed high correlation, and only 5 patients with RSI ≥13 had RFS < 7. Thus, RSI and RFS had significant correlation. They can be used as routine parameters in ENT examination to diagnose LPR.

Clinical evidence indicates that pharmacologic intervention should comprise a minimum of 3 months of treatment with PPIs administered twice a day, 30 to 60 minutes before a meal. In contrast to gastroesophageal reflux disease (GERD), the therapeutic response of patients with LPR to PPIs is variable, in part because LPR requires more aggressive and prolonged therapy than GERD.14 Although most patients show improvement of symptoms within 3 months, the resolution of symptoms and laryngeal findings generally takes 6 months.15

The LPR is a clinical entity widely recognized by otorhinolaryngolists because of its various laryngeal manifestations. Various invasive/noninvasive, subjective/objective tests have been used in its diagnosis with varied results. However, RSI and RFS have high correlation rates and can be included by ENT specialists for establishing the diagnosis of LPR and treat its laryngeal manifestations.