Visualization of the larynx has evolved from the use of laryngeal mirror by Manual Garcia in 1858 to flexible chip on tip stroboscopy.1 With the use of WL laryngoscopy, visualization and understanding of laryngeal lesions have become better; however, small lesions producing hoarseness are still difficult to diagnose. Direct laryngoscopy under general anesthesia is often advised for diagnosing such conditions. With the advent of videostroboscopy in the 19th century, visualizing the vocal fold vibrations became possible, which aided in better diagnosis of laryngeal lesions and thus more accurate treatment. Dr JW Wanderberg and Dr Rolf were the pioneers of stroboscopy.2 Stroboscopy works on the concept of utilizing synchronized flashing light on the vocal folds, which gives an illusion of slow motion, thus allowing the laryngologist to evaluate the vocal fold vibrations and its various pathologies. In WL, all the spectra of light are present; however, NBI light is composed of two specific wavelengths (415 and 540 nm). The NBI is based upon the fact that the depth of light penetration depends on the light wavelength: The longer the wavelength, the deeper the penetration.3 The NBI modifies the broadband WL into two narrow band illumination beams with central wavelengths of 415 and 540 nm, which are designed to primarily penetrate the mucosa and submucosa. The shorter wavelength 415 nm light (blue in color) corresponding to the peak absorption spectrum of hemoglobin penetrates the superficial layers of the mucosa and is absorbed by capillary vessels and appears as a brownish color on the video image. The longer wavelength 540 nm (green in color) penetrates deeper and is absorbed by blood vessels located in the subepithelial layer, which then appears cyan (blue) on the NBI image4 (Fig. 1). When these two wavelengths are used in combination, they provide an extremely high-contrast image of the tissue surface, which helps to depict the vascular pattern and change of mucosal color aiding in the diagnosis of vascular lesions.5 Many studies involving the role of NBI in the diagnosis of malignant and other vascular lesions have been described.3-9 Our study aims to describe the role of NBI in benign glottic lesions, especially those that are nonvascular, based on the principle of change of mucosal color. 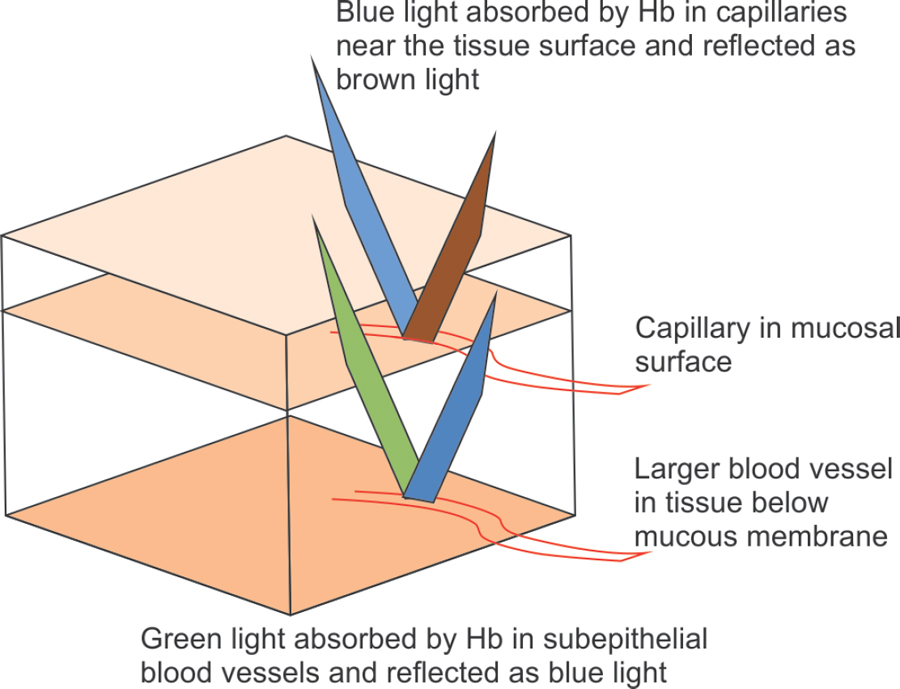 We did a retrospective and prospective study of 247 patients in the voice clinic at our hospital during the period from November 2014 to April 2015. Our study included all patients with suspected benign glottic lesions that were relatively avascular, such as vocal fold sulcus, leukoplakia, and cysts (total = 43 patients). All patients with suspected vocal fold malignancy, polyps, papilloma, contact granuloma, spasmodic dysphonia, and paresis were excluded from the study. There were 43 patients in our study, of which 36 were male and 7 were female. Each patient underwent a detailed history and general examination. All patients were examined in a sitting sniffing position10 while performing 70° rigid laryngostroboscopy using the Olympus system after preprocedure local spray of 10% lidocaine. The examination details were recorded in the form of video clips and images obtained by all three modalities (stroboscopy, WL laryngoscopy, and NBI laryngoscopy). The patients were first diagnosed via videostroboscopy by the first author and then divided into three groups: Leukoplakia, sulci, and cysts (relatively nonvascular benign glottic lesions). A WL laryngoscopy and NBI (Olympus Medical Systems, Tokyo, Japan) were performed on all the patients subsequently and the findings noted. Each patient was rated +1 (suspicious of lesion), +2 (lesion seen but not well-defined), or +3 (lesion well-defined) with respect to stroboscopy, WL laryngoscopy, and NBI. All ratings were done by an independent laryngologist who is not an author of the study. The gold standard for diagnosis was microlaryngoscopy for sulcus and histopathology for cysts and leukoplakia.

In our study, patients with leukoplakia formed the biggest group (21) followed by vocal fold sulci and cysts (11 each). The diagnosis was confirmed on microlaryngoscopy with or without histopathology.

Leukoplakia is best defined as a white patch that cannot be classified based on clinical findings or microscopic features as any specific disease entity.11 Each patient was rated +1 (suspicious of lesion), +2 (lesion seen but not well-defined), or +3 (lesion well-defined) with respect to stroboscopy, WL laryngoscopy, and NBI (Table 1). Cochrane's Chi-square test was applied to calculate sensitivity of each modality for confirmed diagnosis of leukoplakia. It was found that sensitivity of NBI was significantly better than stroboscopy or WL laryngoscopy (Table 2). This was because the lesions were accentuated to a bright white on NBI, which made it easier to demarcate their boundaries (Fig. 2).

Sulcus vocalis is a migration of the vocal fold epithelium into the normally convex superficial lamina propria or deeper owing to absence of the lamina propria.12 In our study, we had 11 patients of sulcus, of which 4 were bilateral and 7 were unilateral. On microlaryngoscopy in one of the patients, we also found a mucosal bridge which was missed on WL laryngoscopy, stroboscopy, and NBI.

Ratings for each modality for cases of leukoplakia

Sensitivity of each modality for diagnosis of leukoplakia

Ratings for each modality for cases of sulcus

Each patient was rated +1, +2, or +3 as was for leukoplakia (Table 3). Cochrane's Chi-square test was applied to calculate sensitivity of each modality for confirmed diagnosis of sulcus. It was found that sensitivity of stroboscopy was significantly better than that of NBI or WL laryngoscopy (Table 4). On NBI, sulcus vocalis appeared as a whitish gray slit in a pinkish blue background (Fig. 3), thus enhancing the detection rates (sensitivity 72.72%). This was especially helpful in the detection of superficial sulcus vocalis, which are more likely to be missed on WL or stroboscopic evaluation.

Cysts may be mucous retention cysts or epidermoid cysts. A mucus retention cyst arises from a blocked minor salivary gland secondary to phonotrauma or inflammation, lined by cuboidal or low columnar epithelium and can be associated with edema and fibrosis in Reinke's space. Epidermoid cysts are lined by squamous epithelium and are filled with keratin and cholesterol debris.13 In our study, we diagnosed 11 patients with vocal fold cysts by stroboscopy. There were two patients with bilateral and nine with unilateral cysts. Each patient was rated +1, +2, or +3 as was for leukoplakia and sulcus (Table 5). Cochrane's Chi-square test was applied to calculate the sensitivity of each modality for confirmed diagnosis of cyst. It was found that sensitivity of either modality did not vary significantly from each other (Table 6).

Sensitivity of each modality for diagnosis of sulcus

Ratings for each modality for cases of cysts

It has been observed that small mucosal lesions can be missed by WL laryngoscopy. Stroboscopy is considered the gold standard in detecting lesions that affect the mucosal wave pattern. The role of NBI in the diagnosis of malignant and other vascular lesions has been described in many studies.3-9 Our study underlines the importance of NBI in detecting benign lesions that have a nonvascular nature, as this also provides for a color differentiation from normal tissue. Such lesions even if they are small and superficial may be picked up by NBI light in the form of a bright white area (cysts, leukoplakia) or black/gray slit in a surrounding a white zone (sulcus).

In our study, it was observed that leukoplakia even when diagnosed by WL laryngoscopy revealed clearer margins by NBI. This is because even thin leukoplakia gets picked up with a white hue against a contrasting pinkish-gray hue using the NBI light. Though the presence of leukoplakia and its boundaries was very clear with NBI, stroboscopy was useful in detecting the depth of the lesion based on the character of the mucosal wave. Fungal infections and collected mucus secretions also simulate leukoplakia as a bright white patch on NBI. Fungal infections can often be differentiated by their presence at multiple sites apart from the vocal folds and the presence of a relatively good mucosal wave pattern. In order to avoid a false-positive finding due to collected mucus secretions, it is important to ask the patients to clear their throat repeatedly. Ni et al5 classified intraepithelial capillary loop changes using NBI into five types (I—V), of which types I to IV are benign and type V is malignant. In Ni's classification, a vascular patch of thin leukoplakia appears as a white area with oblique and arborescent vessels. As the thickness of the leukoplakia increases, the vessels become invisible and only a white area is seen corresponding to the leukoplakia. Therefore, thick leukoplakia, which may be harboring a malignancy in their depth, may be missed, resulting in a false-negative NBI examination. However, thin leukoplakia lesions usually do not hide an existent vascular pattern. The absence of a vascular pattern in an area of suspected leukoplakia (typically thin leukoplakia) on WL laryngoscopy which gets highlighted to a bright white color on NBI may be the hallmark of a thin keratotic patch. As NBI highlights the entire area of nonvascular glottic lesions, the peripheral margins also are clearly identified, and this allows for a better mapping of the disease. In our study, NBI (11 leukoplakia cases) showed a better pickup as compared with stroboscopy.

Sensitivity of each modality for diagnosis of cysts

Superficial sulci, which may not cause a significant mucosal wave abnormality, can easily be picked up on NBI. In one of our patients, who seemed to have a superficial sulcus on stroboscopy, the NBI highlighted the sulcus dramatically.

In our study, cysts appeared as encapsulated fusiform lesions under the epithelium of the vocal fold on WL laryngoscopy, which were brightly highlighted in white on NBI and thus easily confirmed. The mucosal wave is markedly reduced over the cyst while performing stroboscopy; however, smaller cysts may be missed. In our study, one such small cyst was picked up on NBI as the cyst appeared as a bright white lesion in a pinkish-gray background (Fig. 4).