Lipomas in the head and neck region are rare, and its presentation in the larynx is even more unusual, constituting only 0.6% of all benign laryngeal tumors.1 Other uncommon sites in the head and neck are anterior neck, oral cavity, parotid gland, and infratemporal fossa (1–4). Laryngeal lipomas mostly remain asymptomatic, but with a gradual increase in size can give rise to pressure symptoms in the vicinity leading to progressive hoarseness, dyspnea and dysphagia. An endoscopic assessment of the larynx and a computed tomography (CT) scan of the neck are a must in the diagnosis of laryngeal lipomas. Treatment comprises of surgical excision of the tumor using transoral CO2 laser or an external approach, depending on the size of the tumor.

Surgical excision was planned for the patient and a transoral carbon dioxide (CO2) laser excision was performed. A very small part of the tumor was left behind as that was in close proximity to the internal carotid artery. The specimen was sent for histopathology which confirmed the diagnosis of lipoma. The patient was discharged the next day with no postoperative complications. At the 1st postoperative week, the patient's voice was much better, and rigid laryngoscopy examination showed some inflammation and slough at the operative site. The 1-month follow-up showed good healing with vocal improvement. The patient is on regular follow-up currently with a significant improvement in her voice (Figs 1A to F).

A 54-year-old male presented with hoarseness since 6 to 8 months. Laryngostroboscopic examination revealed bilateral true vocal fold keratosis. As the patient did not improve with conservative management, a surgical excision of the keratosis was planned for the patient.

Incidentally, under anesthesia, a left-sided ventricular bulge was seen, suspicious of lipoma. Carbon dioxide laser excision of the keratosis was done along with the lipoma to avoid any further surgical intervention for the lipoma. Histopathological examination showed mature adipose tissue with lobules of mucosal glands and skeletal muscle in the periphery, confirming our diagnosis of lipoma. The keratosis revealed no evidence of any granuloma or malignancy. The patient was discharged the next day and is on regular follow-up, with rigid laryngostroboscopy examinations showing no recurrence of the lipoma or keratosis. 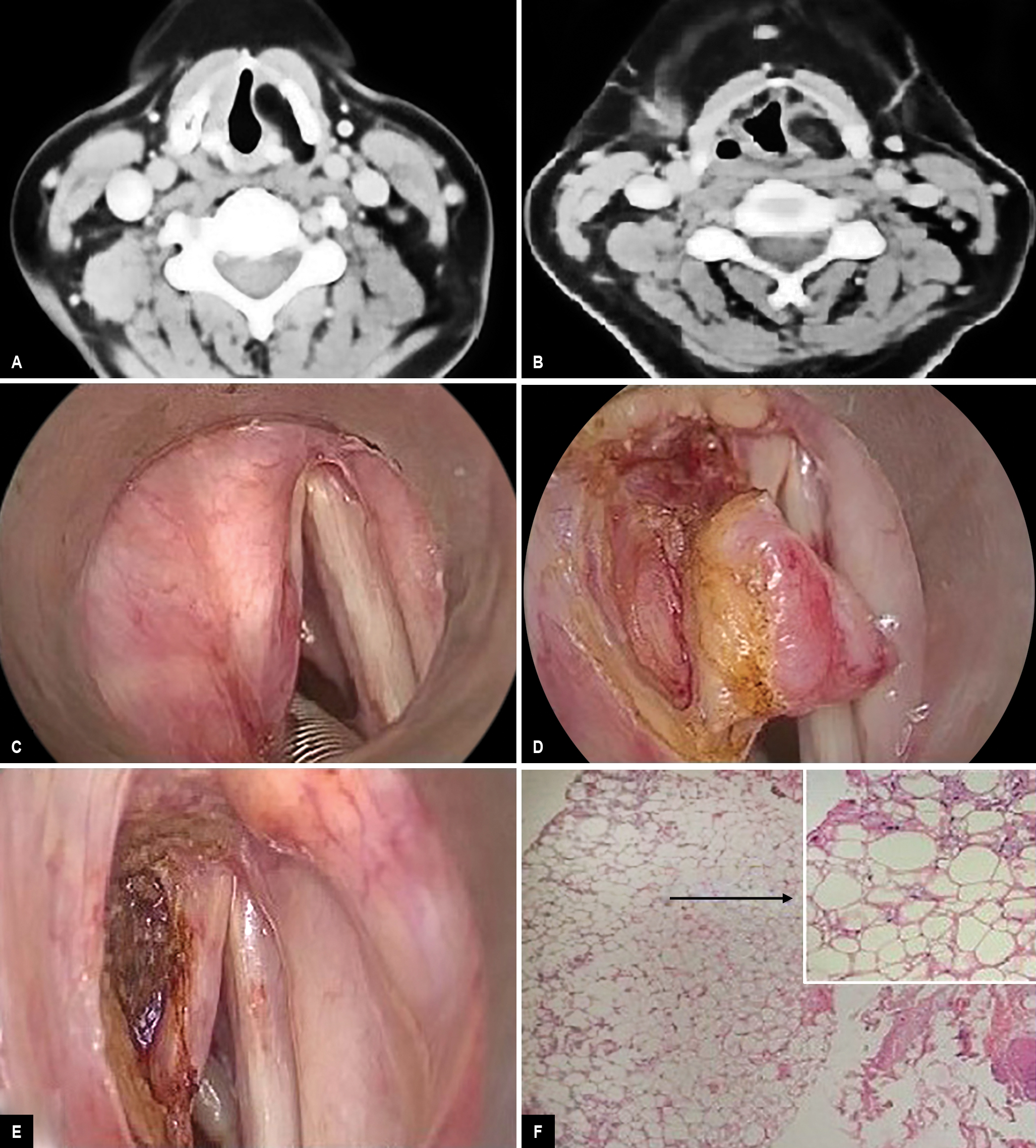 A 36-year-old male patient presented with recurrent throat pain since 2 to 3 months. Rigid laryngostroboscopy examination revealed a left-sided ventricular bulge near the anterior commissure. A CECT scan of the neck was done which to our surprise revealed a left-sided supraglottic homogenous hypodense mass with fat density suggestive of lipoma. As the patient is asymptomatic, the patient is not operated upon and is kept on regular 3 monthly follow-ups (Figs 2A to C).

Laryngostroboscopy: (A) A very small left-sided ventricular bulge (arrow) and the same bulge can be corroborated with CT scan on; (B) coronal; and (C) axial views

A 50-year-old male patient was referred with hoarseness since 1 year. The patient had already undergone microlaryngoscopy procedure with biopsy with histopathology confirming laryngeal lipoma. Stroboscopic examination showed a huge left-sided supraglottic bulge, and the ipsilateral true vocal fold was not seen. A CECT scan of the neck showed a well-defined fat-containing mass in the left supraglottic region suggestive of lipoma. However, this patient was not willing for completion of surgery and did not follow-up (Figs 3A and B).

Laryngeal lipomas are rare, benign, slow-growing tumors that constitute only 0.6% of all benign tumors of the larynx.1 Lipomas have a male-to-female ratio of 5:11-5 and most often occur in the 6th decade of life.1,6,7 In the larynx, lipomas are generally located in the supraglottic area, but they are sometimes (rarely) found in the subglottic area.8,9

Histologically, lipomas are partly or totally encapsulated; may be composed of mature fat cells; similar to normal cells; varying slightly in size and shape, with no evidence of pleomorphism, lipoblasts, or atypical adipocytes with hyperchromatic nuclei; or of an infiltrative growth into the surrounding tissues. They are richly vascularized, but the vascular framework may be difficult to appreciate due to compression by overdistended adipocytes resulting from lipid vacuole storage.11

Laryngeal lipomas mostly remain asymptomatic, but with progressive increase in size can present with hoarseness, dyspnea, or even stridor requiring urgent tracheostomy.12 On clinical examination, they appear as smooth well-defined submucosal bulges, usually in the supraglottic region, mimicking laryngoceles. The differentiation between a lipoma and a laryngocele can be made easily with the help of radiologic imaging, i.e., both CT and magnetic resonance imaging (MRI) provide a definitive diagnosis in virtually all cases. With CT, lipoma typically manifest as homogeneous, hypodense, nonenhancing lesions with attenuation values from –65 HU to –125 HU.13 Lipomas are isointense relative to subcutaneous fat with all MRI pulse sequences (i.e., hyperintense on T1-weighted images, moderately intense on T2-weighted images, and hypointense on fat-suppressed T1-weighted images).

As with lipomas in other parts of the body, if portions of the laryngeal lipoma are isoattenuating or isointense relative to soft tissue at CT scan or MRI and contrast enhancement is observed, the diagnosis of a liposarcoma should be considered.14

Surgery is the treatment of choice for symptomatic laryngeal lipomas. A conservative endoscopic procedure with CO2 laser excision is preferred in case of a tumor of small dimensions and lipomas with limited lateral extent. The advantages of CO2 laser excision are minimal tissue handling, less intraoperative bleeding, and avoidance of an external surgical scar.

An external surgical approach (via lateral pharyngotomy, laryngofissure, subhyoid pharyngotomy) may be suitable in large lipomas and lipomas extending more laterally into the submucosal space.7,11,14

Since lipomas can relapse even after several years, long-term follow-up for an extended period of time is mandatory.11,15,16

Even though lipomas are rare benign tumors of the larynx, we should always keep our antenna up regarding laryngeal lipoma as a differential in laryngeal lesions. Laryngeal lipomas have no set management protocol. A custom-made plan for each patient should be charted out depending on symptoms of the patient and extent of the lipoma.