Squamous cell carcinoma is the most common histological type of laryngeal tumor. Adenoid cystic carcinoma (ACC) of the larynx is one of the rarest verity and it account for < 1% of laryngeal tumors.1,2 The local recurrence and distal metastasis is the usual behavior of ACC. The causes behind it are early perineural invasion and blood-borne metastasis.3

We present a rare case of ACC of glottis and subglottis, presented to us with long history and with respiratory distress.

Twenty-four-year-old female patient presented with history of difficulty in breathing for the last 2 years. This was insidious in onset, persistent and gradually progressive such that the patient presented to our emergency department with stridor. It was associated with hoarseness for the past 3 to 4 months, which was also persistent and progressive. There was no history of difficulty in swallowing, neck swelling, fever, weight loss, or loss of appetite. No history suggestive of any addiction. There was no significant family or past history of any chronic illness. On indirect laryngoscopic examination, multiple polypoidal tissue was filling endolarynx at the level of true cords. Clinical diagnosis of laryngeal papillomatosis was made and the patient was immediately shifted to operation theater for removal by direct laryngoscopy under general anesthesia. The ulceroproliferative growth was found under polypoidal mass and it involved glottis and 2 cm of subglottis (Fig. 1). The lesion was debulked and histopathology report showed feature of ACC. The patient underwent investigations, which include computed tomography scan of neck and it showed soft tissue density in left paraglottic space (Fig. 2). Magnetic resonance imaging (MRI) showed hyperintense lesion in left side of glottis and subglottis (Fig. 3). The mass lesion in endolarynx was not seen in radiology because of previous debulking of lesion. The patient was planned for wide field laryngectomy with partial pharyngectomy with left hemithyroidectomy under general anesthesia. Growth was involving left ventricle left vocal cord and left side of subglottis (Fig. 4). Postoperative period was uneventful. Oral trial was given on 10th postoperative day. The final histopathology report showed arrangement of basaloid epithelial cells in tubules and cribriform pattern, suggestive of ACC without epithelium and cartilage involvement with free resection limits and lymph nodes (Fig. 5). Patient received radical radiotherapy. She is disease-free at 6 months follow-up. 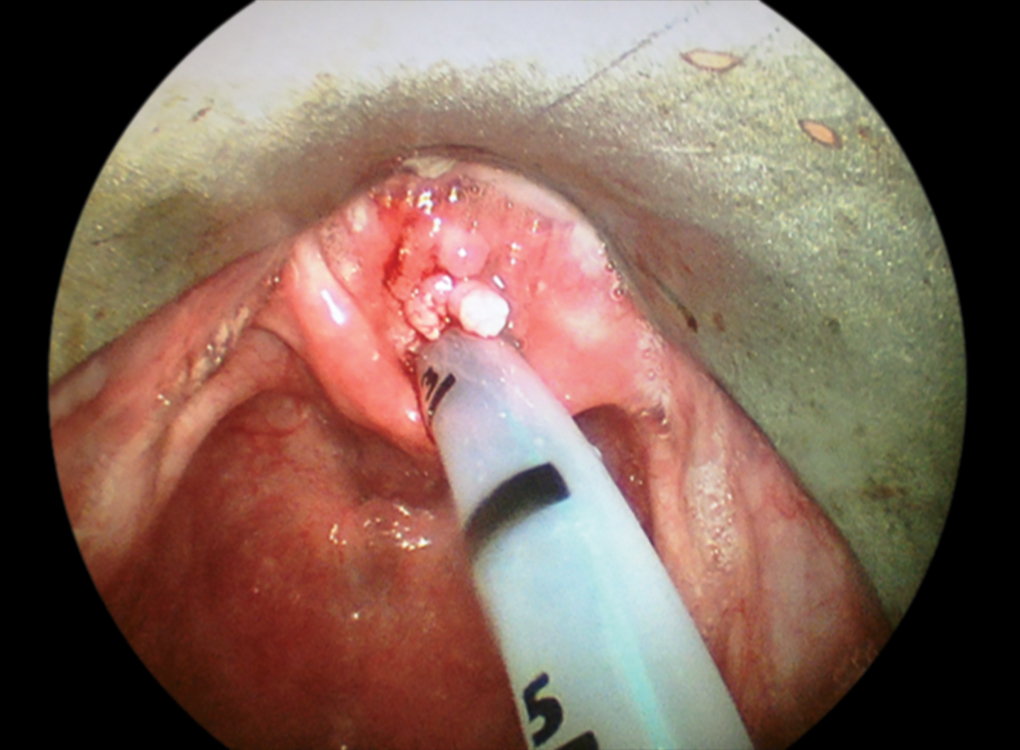 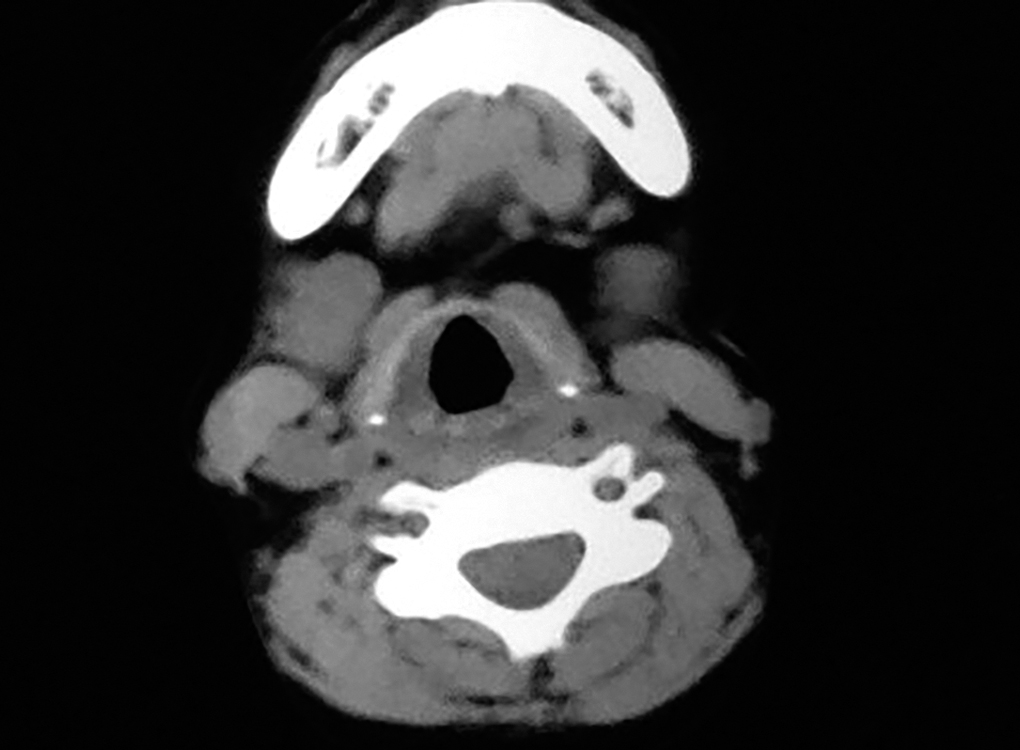 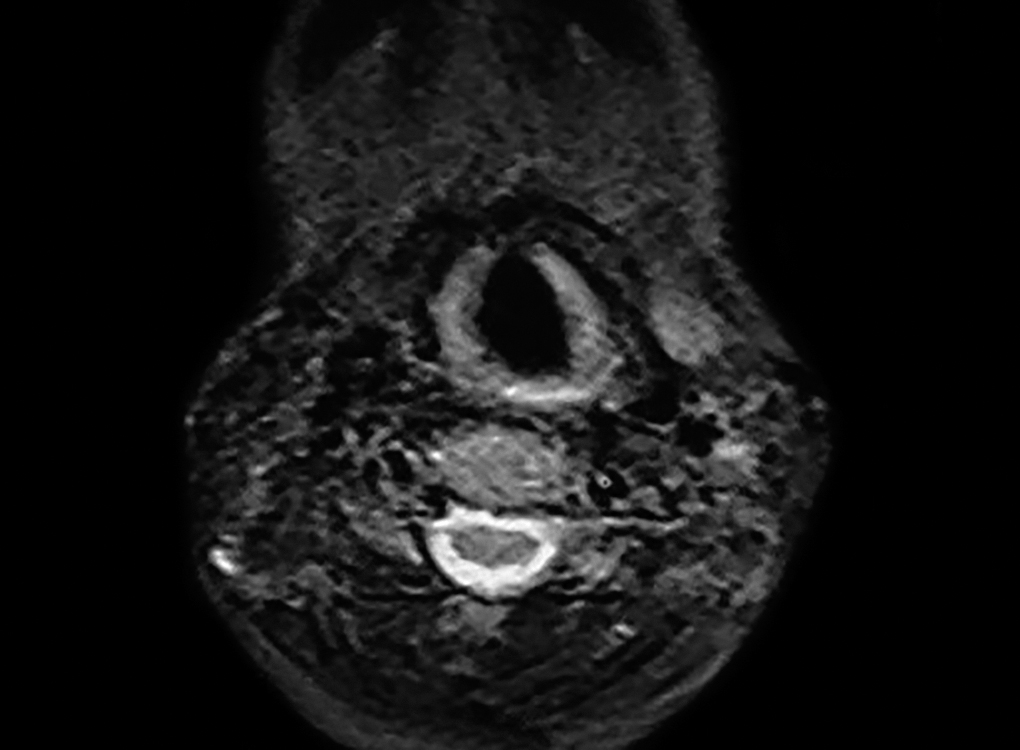 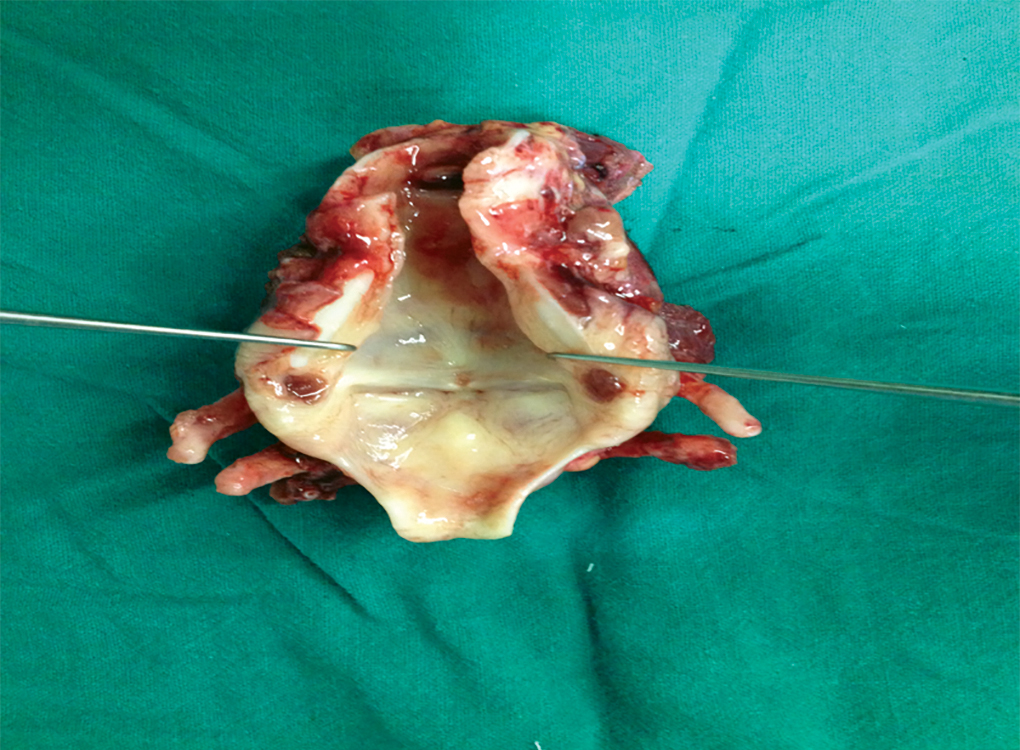 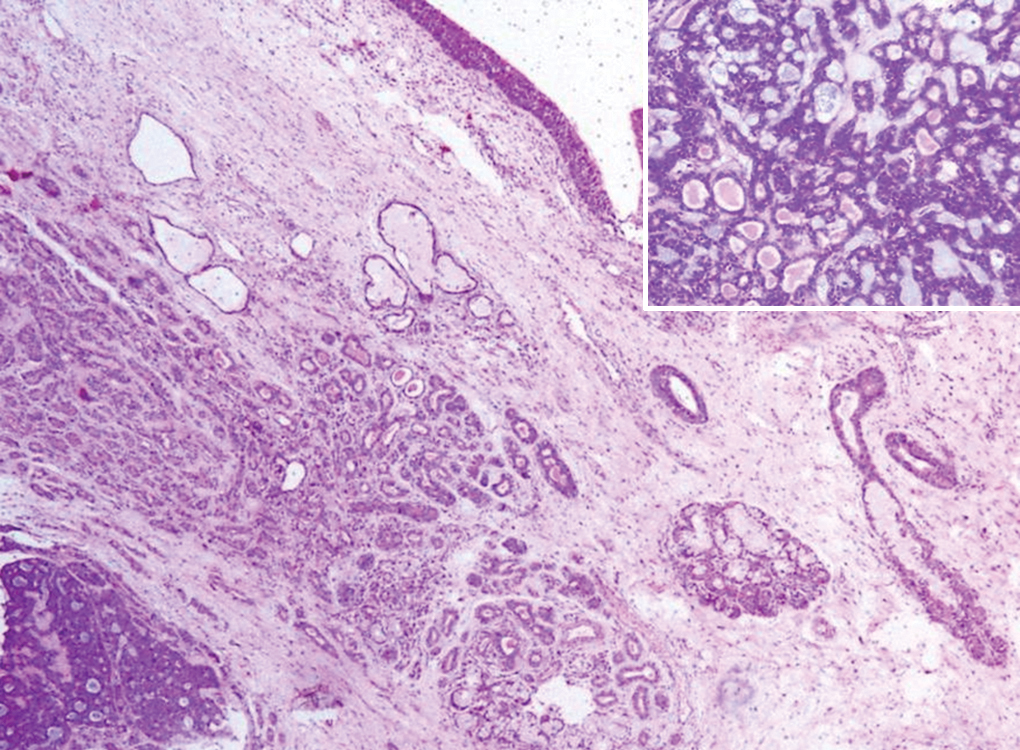 The age range for ACC has been documented in the literature from 3 to 8 decades of life with peak at 5th decade with slight female preponderance, whereas our patient is relatively young.8 The risk factor specific for ACC is not mentioned in the literature.9

The cribriform, tubular, and solid are three histopathological patterns of ACC. The cribriform have best prognosis whereas solid have worse prognosis.9

Precise mapping and staging are essential for planning and prognosis of disease. The contrast enhanced computed tomography (CECT) is the usual investigation for mapping and staging of tumor. The ACC has characteristic submucosal extension and perineural invasion. In such suspected cases, MRI will be better modality.11 The nodal extension is seen in 10 to 15% of cases.12

Surgery with or without adjuvant radiotherapy is the proposed management for laryngeal salivary gland tumors. Conservative laryngectomy can be possible in early stages.13 The characteristic feature of ACC is submucosal spread and perineural and lympho-vascular invasion. Total laryngectomy is the usual treatment of choice.7 Neck dissection is not recommended in N0 neck.3,7-9,14-16 Primary radiotherapy has a minor role in treatment.8 The prime indications for radiotherapy are positive surgical margins, perineural invasion, or high-grade tumors. The role of chemotherapy is in palliative care patient and as adjuvant therapy for high-grade lesions.

This tumor is characterized by slow progression, multiple local recurrences, and distant metastasis. The treatment of choice is surgery and adjuvant radiotherapy with long-term follow-up.