A 50-year-old male was referred as a case of subglottic growth. Patient gave history of cough, hoarseness of voice, and difficulty in breathing for 3 months. The patient had suffered from intestinal obstruction and gave history of ventilatory support twice in 2007 and 2014 for 5 and 8 days respectively. The patient was also a chronic smoker for last 30 years.

On examination, the patient was poorly nourished and had stridor. Examination of oral cavity and oropharynx was normal. Indirect laryngoscopy showed a small 2 × 1 cm polyploidal growth on the left true cord, and concentric thickening with narrowing was seen in the subglottis Cotton Myers 2; movement of the vocal cords was normal; laryngeal crepitus was present; and there was no palpable cervical lymphadenopathy.

The patient underwent emergency tracheotomy in view of stridor and then underwent direct laryngoscopy. Direct laryngoscopy revealed concentric thickening in the subglottis and a small polyploidal growth left vocal cord. Biopsy of both lesions was taken, and histopathological report of left vocal cord was that of vocal nodule and that of subglottis was mild dysplasia with fibrosis.

The patient was diagnosed as a case of papillary carcinoma thyroid T2N0M0 with subglottic stenosis with vocal nodule and was planned for total thyroidectomy. Intraoperatively, right level III node was found enlarged, and hence, right level II to V neck dissection was done. Right central compartment clearance with left central compartment inspection was done. Peroperatively, right lobe of thyroid was found enlarged (Fig. 3) with nodule on it, and the cricoid was compressed on the right side. The nodule was shaved off the cricoid (Fig. 4). The superior laryngeal nerve, recurrent laryngeal nerve, and superior and inferior parathyroids were preserved. His postoperative period was uneventful. The histopathology report was papillary carcinoma thyroid (conventional variant) Stage pT2N1bM0 (IV A). 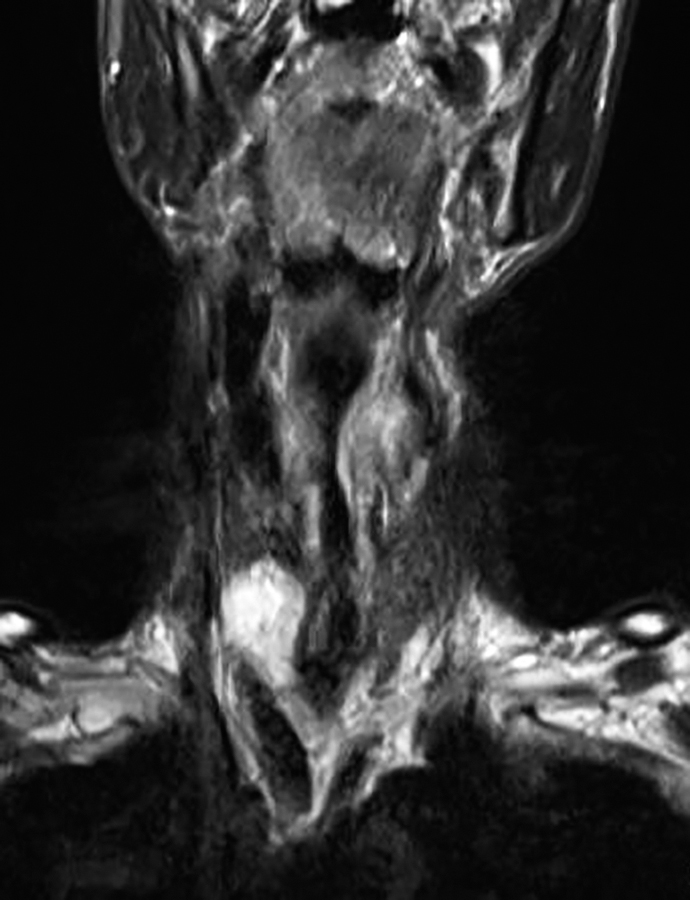 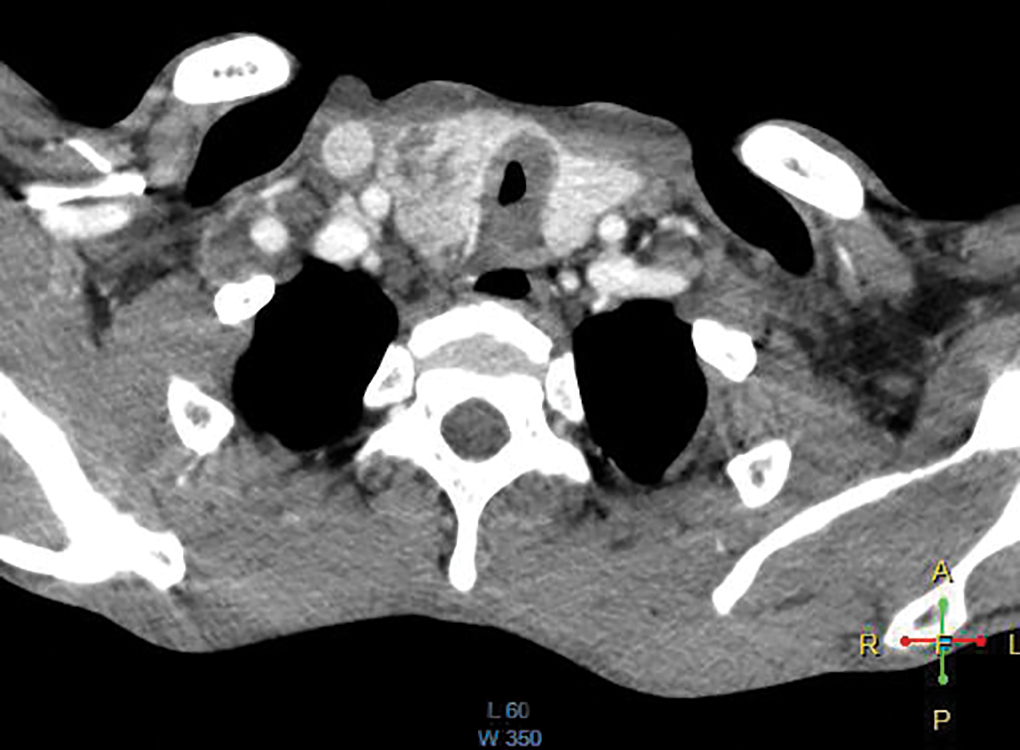 Exposure of the right thyroid lobe showing the tumor 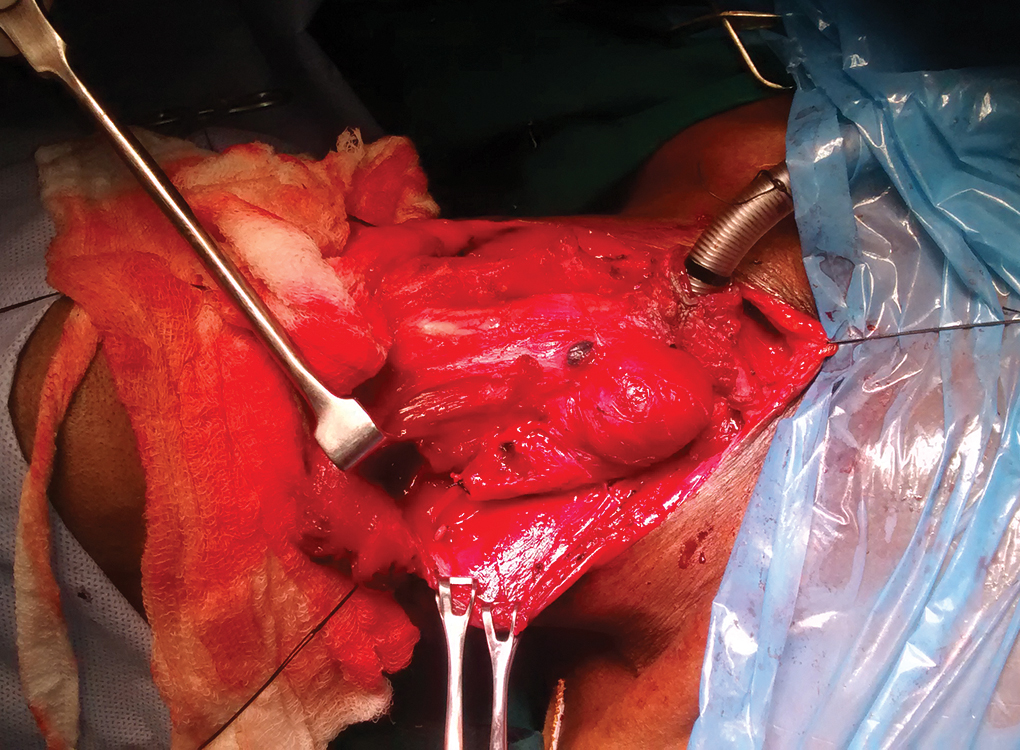 Tumor shaved off the cricoid cartilage 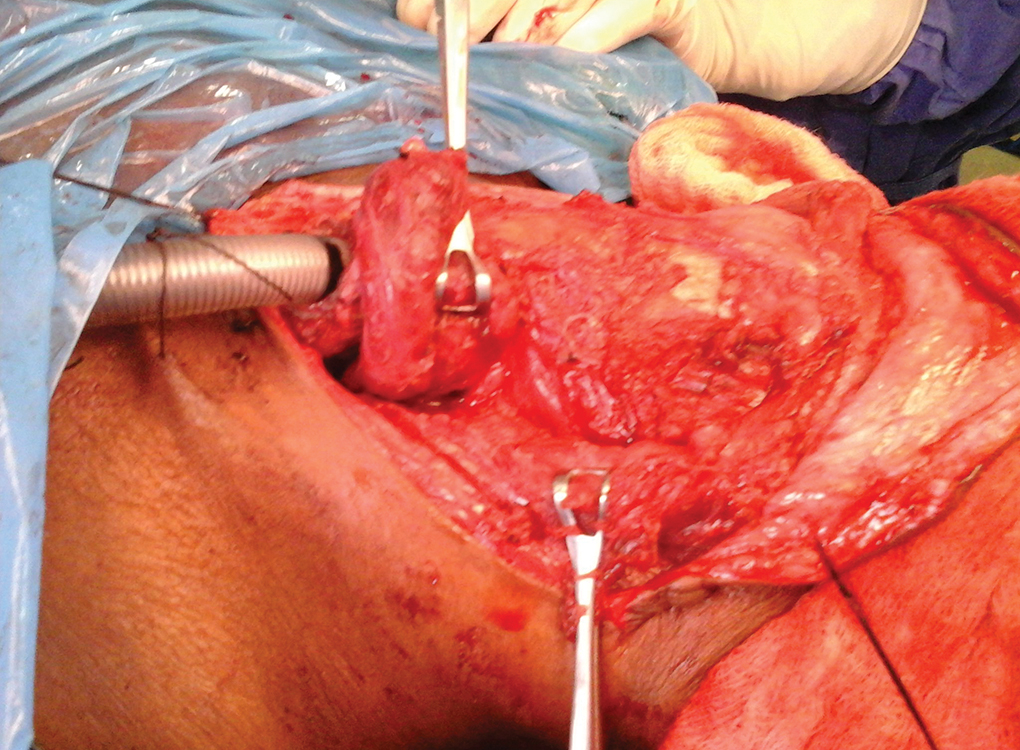 On postoperative day 7, the patient was taken up for CO2 LASER dilatation of subglottic stenosis. Radial incisions were given at 12, 3, and 9 O'clock, and stenotic segment was dilated.

The patient was successfully decannulated after 7 days and later underwent Radio Iodine Ablation with 150 mci I. At 6-month follow-up, he is asymptomatic.

Stridor (Latin for “creaking or grating noise”) is a high-pitched breath sound resulting from turbulent air flow in the larynx or lower in the tracheobronchial tree. Stridor can be acute or chronic.

Subglottic stenosis is defined as partial or complete narrowing below true vocal cord up to lower border of cricoid.1 The predisposing factors are complete circular cartilage of cricoids cartilage lined by fragile respiratory epithelium. Of the causes, iatrogenic injuries and external neck trauma account for most of the cases.1 The incidence of subglottic stenosis after intubation ranges from 0.9 to 8.3%.2

Stridor caused by thyroid malignancy is rare. Laryngotracheal invasion occurs in 5 to 7%3 of patients with thyroid carcinoma and leads to decreased survival and higher local recurrence rate. Invasion of local structures, such as thyroid cartilage, recurrent laryngeal nerve, larynx, and esophagus occurs commonly in anaplastic carcinoma and infrequently in papillary carcinoma thyroid. When anaplastic carcinoma is excluded, the incidence of invasion of upper aerodigestive tract by well differentiated thyroid carcinoma (papillary and follicular) is less than 4%.

The mode of invasion into the larynx by thyroid carcinoma is by direct extension of the primary. In early invasion, tumor is seen at the time of resection penetrating perichondrium and invading superficially into laryngeal cartilage. As the disease progresses, the tumor continues to invade eventually involving the submucosa of laryngeal lumen which is detectable at the time of resection as a submucosal mass or mucosal ulceration. The predisposing factors for invasion are the weak laryngeal perichondrium and the cricothyroid membrane which is a poor protective barrier.

Most effective treatment of thyroid carcinoma with aerodigestive tract invasion is complete surgical resection. Shin et al4 proposed a staging system to guide surgical decision-making based on depth of tracheal involvement. The shave procedure is done when the tumor is usually adhered to trachea or cricothyroid muscle without gross invasion into intraluminal perichondrium. On the contrary, intraluminal extension requires resection of trachea and a portion of larynx including cricotracheal cartilage. In our case, it was stage 1 of Shin's staging with invasion through the capsule of the thyroid gland which was abutting but not invading the external perichondrium, and hence, a shave resection was adequate.

Rarely, tracheal tumors at the level of the thyroid can be misinterpreted as invasive thyroid cancer with tracheal involvement upon initial diagnosis5 and may wrongly entail a complete resection of the involved airway in combination with the thyroid gland. An accurate diagnosis in these cases can be difficult due to misleading FNAC findings, thought due to the FNAC needle passing through the thyroid before reaching the trachea or a tumor that abuts both structure. Hence, in such cases the imaging findings need to be carefully studied.

In our case, there was the unusual coexistence of two conditions, namely, subglottic stenosis and papillary carcinoma thyroid causing airway compromise. This case also highlights the rare presentation of well-differentiated thyroid cancer as stridor.