Laryngotracheal stenosis has shown a rise in recent years probably because of increased incidence of prolonged intubations, and tracheostomy was done for extensive and complex neurological conditions, cardiovascular, head and neck surgeries, and increased incidence of recovery of patients out of the intensive and critical care units secondary to the recent technological advances.1 Tracheal stenosis can occur following endotracheal intubation or tracheostomy with inappropriate cuff pressure.

Endotracheal tubes cause pressure necrosis of mucosa causing fibrosis to the subglottis that can result in severe commissural scarring which is difficult to treat. Tracheostomy tubes can cause severe stomal stenosis in the trachea or infraglottic region. Airway intubation resulting in pressure necrosis because of the tube cuff is a preventable problem. Pressure can result from the tube of inappropriate tube size (large tube/undersized tube secondary to more inflation in order to establish adequate seal), friction of tip of tube against tracheal wall, traction of the ventilator tubing against the tube in patients on ventilator for prolonged duration.

In recent times, despite the advent of low-pressure high-volume cuffs, in adults, prolonged intubation is mostly due to the uncertainty about final prognosis of the patients following accidents or coma due to any cause. Secondary to this uncertainty, tracheostomy is postponed causing more damage to the trachea predisposing it for stenosis. Most common site of postintubation stricture is at the site of the endotracheal tube cuff. Cuff strictures can occur as early as 36 hours of intubation and is thought to be due to ineffective deflation of the cuff and usually become symptomatic with an average of 5 weeks after extubation.

Multiple treatment options are available for tracheal stenosis. These include tracheal dilation, excision of stricture, and end-to-end anastomosis or staged reconstruction with musculocutaneous flap. Restenosis may sometimes occur, particularly when the stenosis is > 2 cm in length because of the presence of excessive tension at the line of anastomosis. In addition, delayed surgical correction may increase the severity by repeated and reciprocal irritation.

Choice of procedure depends on age of patient, site of stenosis, nature of stenosis, etiology, and general condition of patient. More conservative procedure with less tissue damage should be considered in the surgical reconstruction of laryngotracheal stenosis in order to preserve physiological function. In our experience, laryngotracheal reconstruction followed by Montgomery T-tube stenting was effective and simpler and had less morbidity and higher success rate of decannulation.

We report 21 cases of laryngotracheal stenosis, who underwent laryngotracheal reconstruction with T-tube stenting over 7 years from Jan 2008 to Jan 2015 in Sri Venkateswara ENT Institute, Bangalore Medical College and Research Institute.

Patients were evaluated according to their age, gender, etiology, duration of intubation/tracheostomy, location, and size of the stenotic segment on computed tomography (CT), follow-up time with T-tube, the complications that occurred after T-tube removal, and additional tracheal surgeries done if required.

The selection criteria for T-tube insertion in patients were:

All patients were given general anesthesia through tracheostomy tube. Diagnostic laryngoscopy and rigid bronchoscopy was performed to confirm the level of stenosis.

Midline vertical incision was taken extending from superior border of stoma to lower border of thyroid cartilage. Subcutaneous tissue and strap muscles were separated. Thyroid isthmus separated from trachea was clamped, cut, and ligated. Anterior wall of trachea was exposed and incision was taken from upper border of tracheal stoma to cricoid cartilage. In case of subglottic stenosis, cricoid cartilage was divided. Stenotic segment was exposed and measured. Fibrous tissue in tracheal lumen was released and lateralized with 3-0 Vicryl. Tracheal trough was created by taking tagging sutures from tracheal wall to subcutaneous tissue. Injection Mitomycin C was prepared by diluting 2 mg in 1 mL of normal saline. Cotton patties soaked in Mitomycin C were applied to the stenotic segment for 5 minutes. The T-tube was cut to exact length; sharp edges of tip, thus created, were rounded with file. Tracheostomy tube was removed. Silastic tube was inserted in stenotic segment with distal limb at least 1 cm above the carina and proximal limb just below the glottis. Anesthesia was continued through the T-tube. Skin separated from subcutaneous tissue and sutured over the T-tube with 4-0 Ethilon. Horizontal extraluminal portion of the T-tube was capped as soon as transglottic air flow was tolerated so that patient breathed through nose on operation table.

Postoperative management included prophylactic antibiotics for 1 week, steam inhalation, and airway hygiene every 4 to 6 hours for 2 weeks. After discharge, the cleaning procedure with cotton tip applicators dipped in normal saline was performed 3 times a day or more often if necessary, to dislodge tenacious mucus and crusts. In addition, the skin around the stoma was treated with antibiotic ointment at least 3 or 4 times a day. The horizontal limbs of the T-tube were plugged if possible as soon as the patient had recovered from ventilation anesthesia to maintain humidification and phonation.

Fiberoptic bronchoscopy was performed under local anesthesia every month to check the T-tube condition. Patients were followed up every month and by the end of 6 months CT was done without the T-tube. Only in cases where stenosis still persisted T-tube was reinserted, otherwise T-tube was removed. Patients were followed up every 10 days in cases where tube was removed for next 2 months and there after monthly. In only one patient the tube was removed in 4th month in order to remove the granulation tissue near the tube end and reinserted after removal. All patients regained voice after decannulation but the assessment of quality of the voice was not done.

Age and sex distribution among the subjects studied is shown in Graph 1. Majority were in the age group 20 to 30 years and a male preponderance was noted.

Demographic profile of the patients 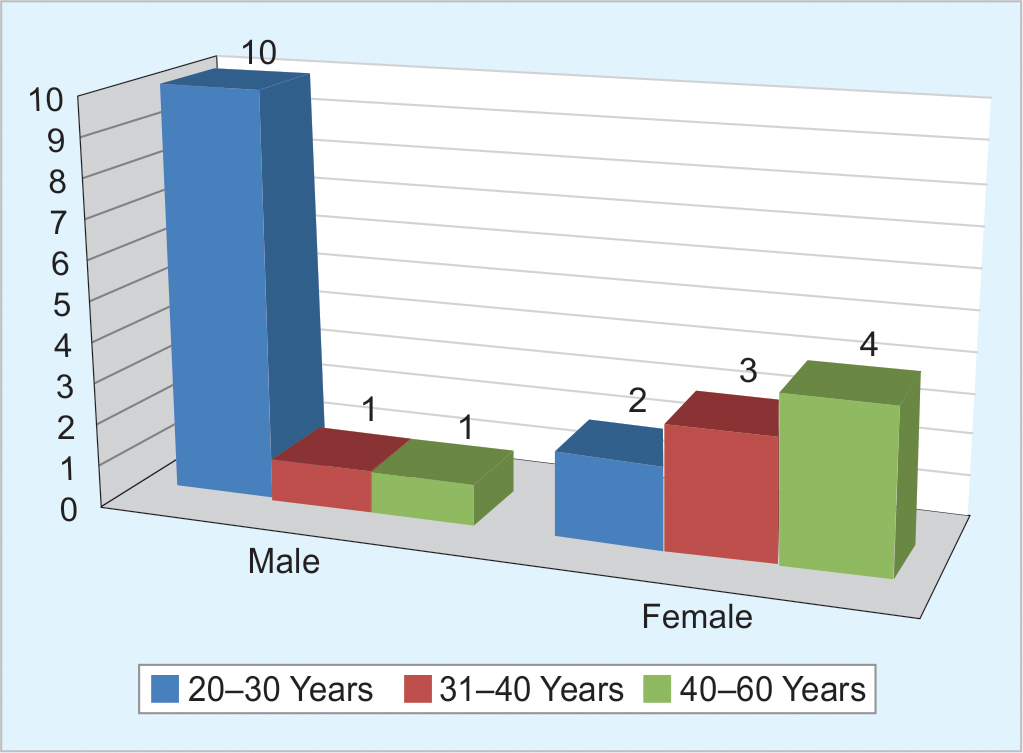 The duration between extubation and appearance of respiratory symptoms ranged from 32 to 96 days. Location of stenosis was more common in subglottic region (61.9%), followed by tracheal (33.33%) and laryngotracheal stenosis (4.7%), which is depicted in Graph 2. Fourteen out of 21 patients had stenotic segment length between 2 and 4 cm, which is represented in Graph 3. Figures 1 and 2 show the intraoperative picture. Figure 3 is a picture of the Montgomery T-tube before insertion. Figure 4 depicts the patient with T-tube in situ and Figure 5 depicts the postoperative picture.

Table 1: Duration and mode of airway management observed among the 21 patients 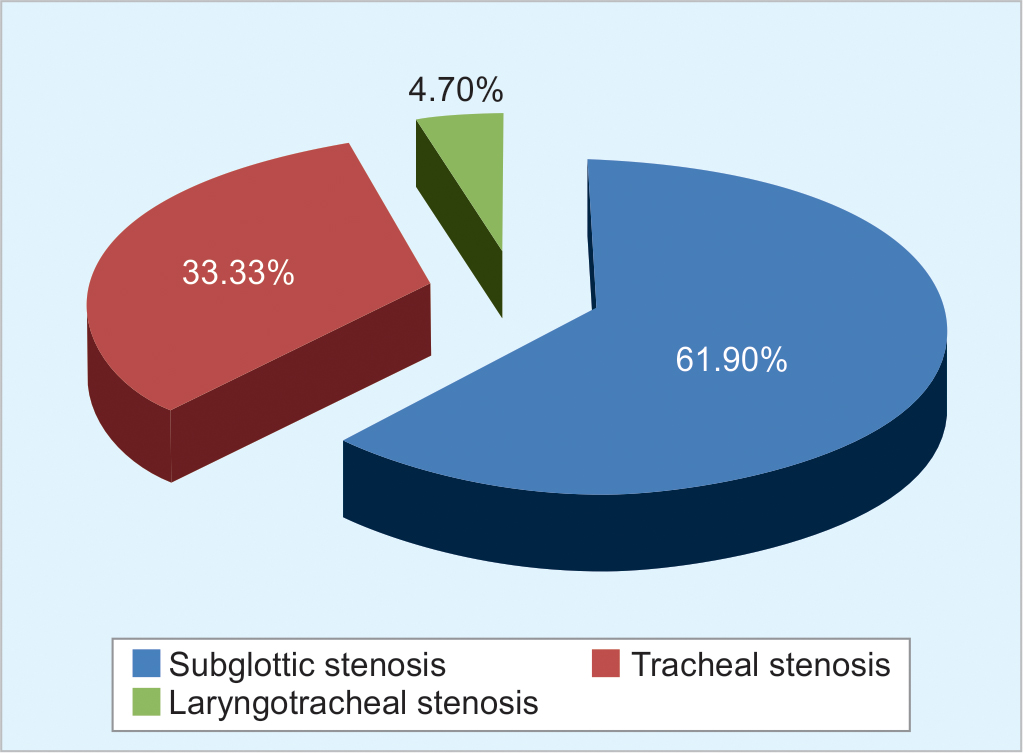 Variation in the length of the stenotic segment 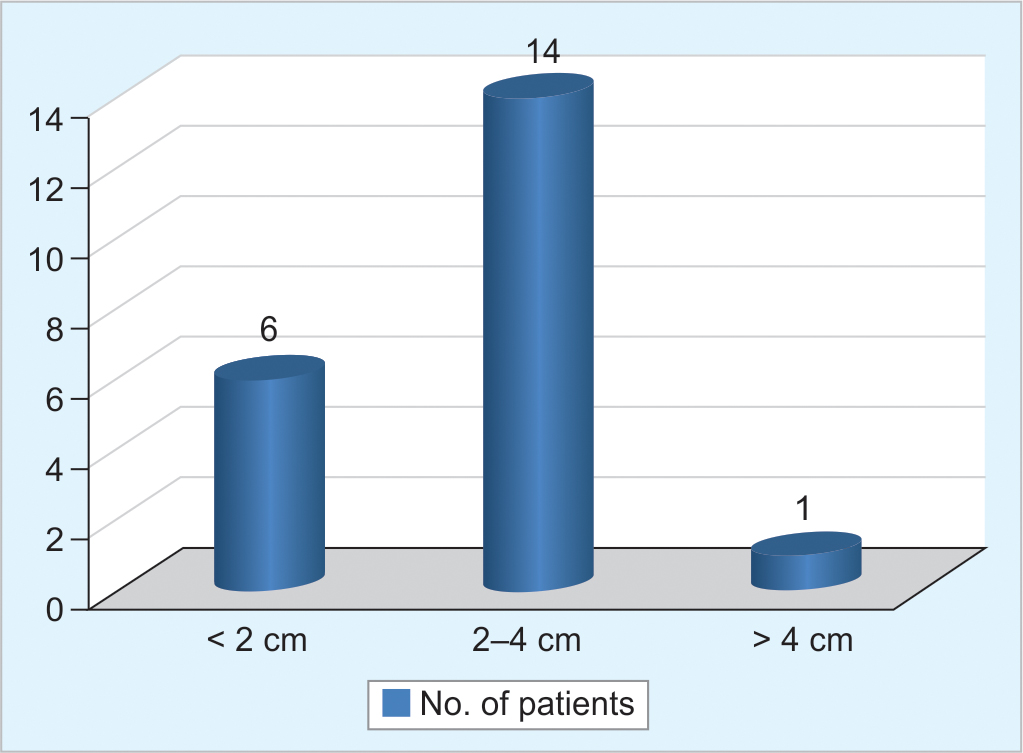 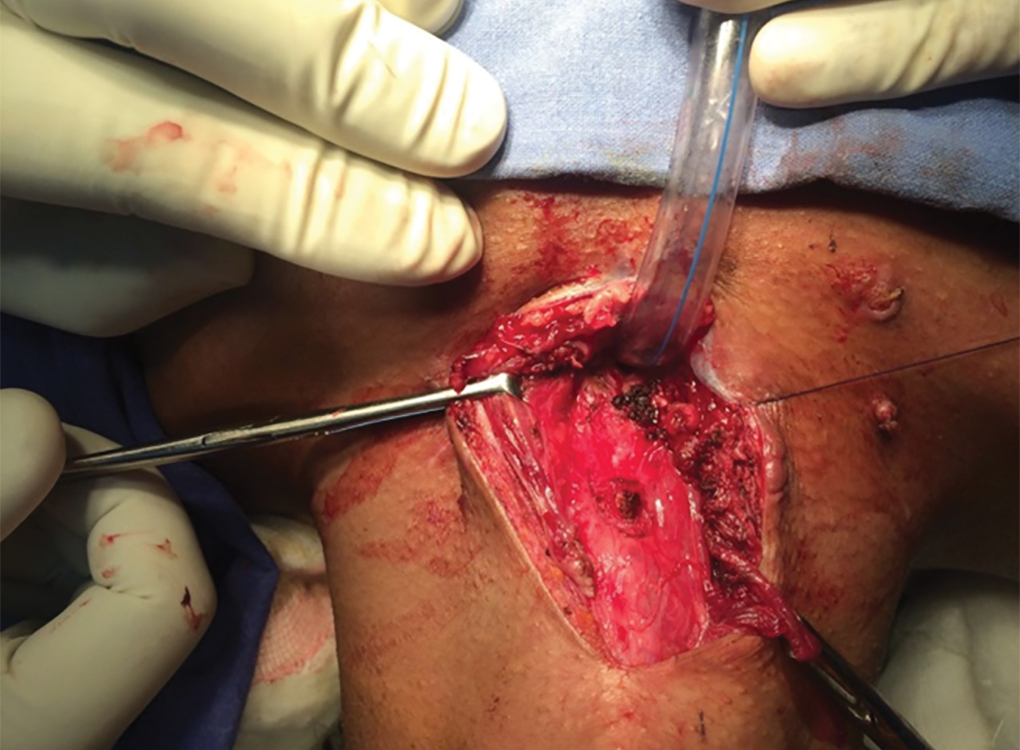 Intraoperative picture of T-tube in situ 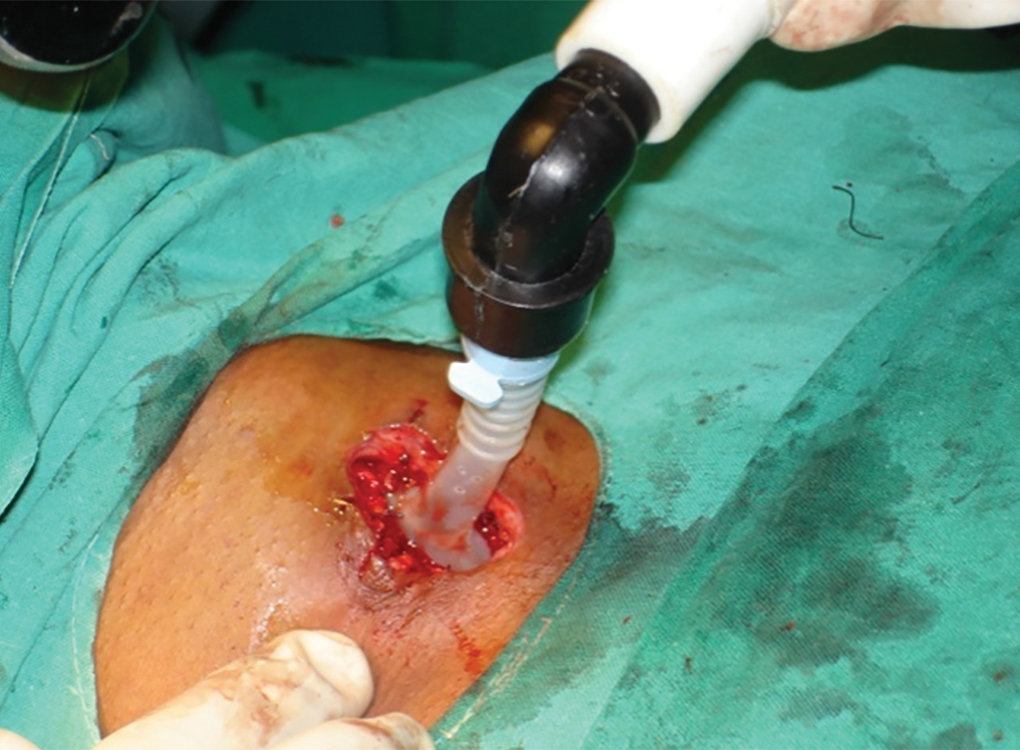 Management of laryngotracheal stenosis is a challenging problem that requires a multidisciplinary approach from different surgical teams. The basic aim of any treatment modality adopted is airway patency,2,3 glottic competence for airway protection against aspiration, and acceptable voice quality4,5 in that order of priority. Predisposing factors for tracheal stenosis related to the endotracheal tube include a wider tube diameter, longer intubation time, continuous movement of the tube in the tracheal lumen, and difficult intubation. Other etiologies include traumatic and nonsterile aspiration, emergency cricothyrotomy, high-level tracheotomies, and mechanical ventilation.6 Some studies claim that tracheal damage begins 17 hours in adults and 1 week in infants following intubation.7 Although permanent tracheotomy is the simplest treatment method, it has limitations, such as inability to vocalize without occluding the stoma, inherent disfigurement associated with the tracheotomy tube, and the inability to engage in certain recreational activities (e.g., swimming). Decannulation and closure of a preliminary tracheotomy is thus yet another goal of modern therapy addressing airway stenosis.8 The T-tube is the preferred tracheal stent for stenosis of upper airway when surgical reconstruction cannot be accomplished and dilatation provides inadequate relief.9 Advantages of T-tube include preservation of speech, better tolerance and maintenance of nasal respiration, which humidifies lower airway. The tube is socially acceptable and its daily care is easy. 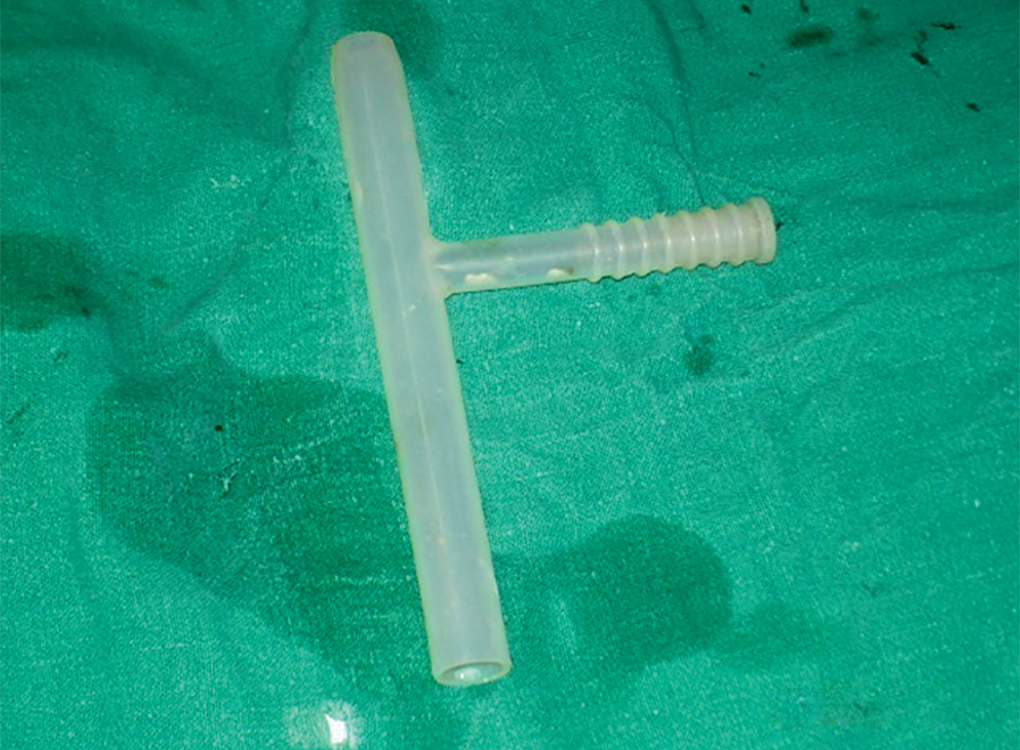 Patient with T-tube in situ 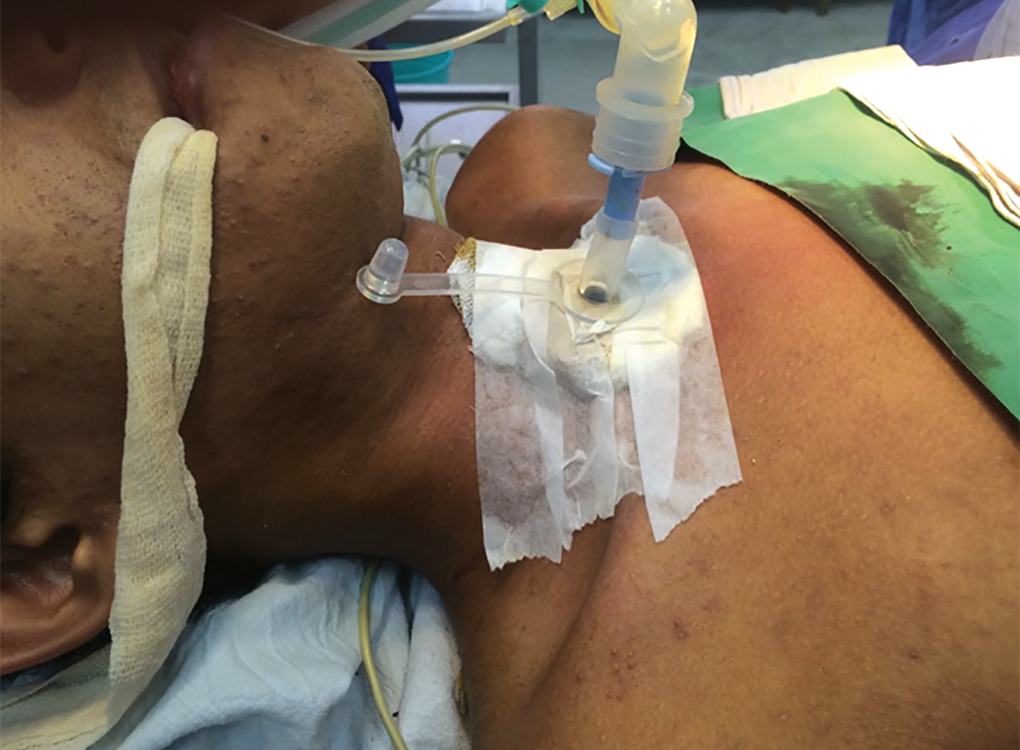 Postoperative picture with T-tube in situ 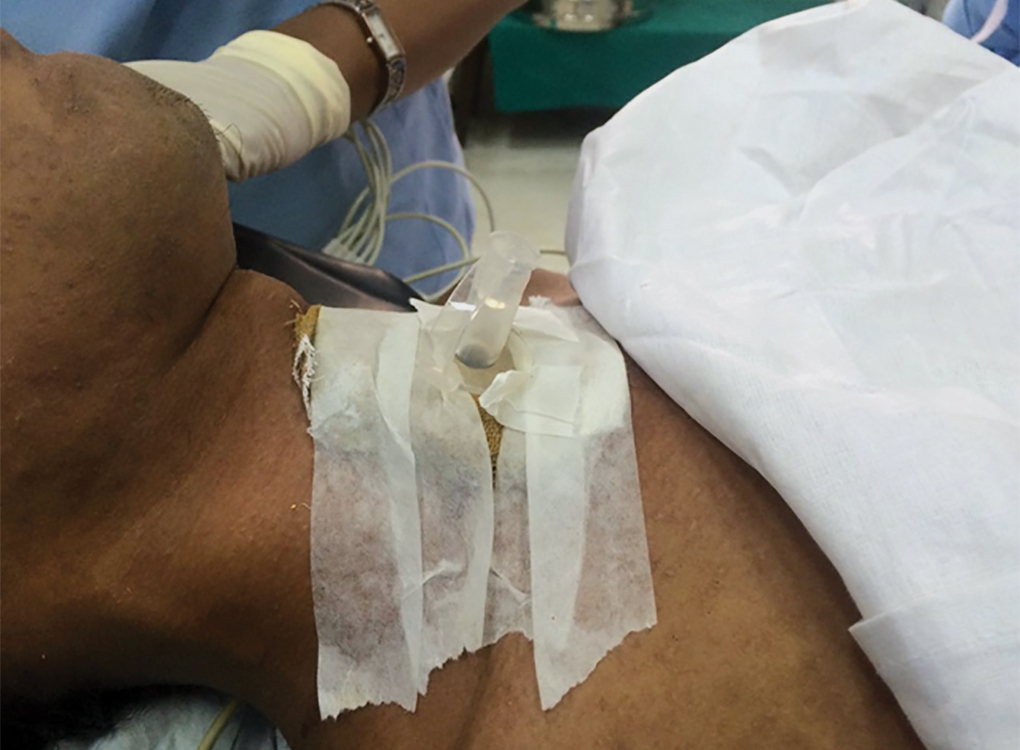 The tracheal T-stent initiates little or no tissue reaction unless it touches the undersurface of the vocal cord. This serves as both a stent and a tracheostomy tube. The intraluminal portion is of sufficient density and thickness to support a reconstituted stenotic larynx and trachea. Mucus and crusts do not readily adhere to the smooth surface of the silicone material. Most of the time, the soft T-stent remains plugged, thus allowing respiration and phonation while maintaining the airway.12

The study conducted by Huang13 regarding the use of silicone T-tube to treat tracheal stenosis or tracheal injury showed that all 11 patients who were treated with the T-tube for tracheal stenosis benefited from the operation, with relief of respiratory distress and voice restoration.

Kelkar et al15 in their study of management of laryngotracheal stenosis by Shiann-Yann Lee technique using T-tube showed that 23 of 30 patients (78.6%) had an uneventful period between the insertion and removal of T-tube without any complications.

In our study improvement in patient symptoms was complete in terms of decannulation, which correlates with the above studies.

Tracheal resection and anastomosis is the definitive surgical treatment of choice in tracheal stenosis. However, this surgical approach is not feasible when the glottis and subglottis are involved, or in patients with poor general condition. Hence, we used T-tube as first line of management in cases of laryngotracheal stenosis secondary to various causes in which surgical management is not feasible. We followed up our patients for an average of 6 to 9 months and made additional management options based on requirement in the follow-up session. Given the complexity of tracheal surgery, we feel that T-tube application should be initially attempted in tracheal stenosis. We propagate that this technique would be more efficient and should be considered, since it has produced complete improvement in airway patency and restoration of voice in our study.