A Curious Case of Laryngeal Stridor

Aim and objective: To present a case of acute respiratory obstruction due to isolated hemorrhage in the larynx in a patient with coagulation disorder, which is a very rare presentation.

Background: Acute upper airway obstruction can occur due to various causes. Spontaneous, unprovoked hemorrhage in the larynx can be a significant and potentially life-threatening complication. Coagulation disorders constitute a small percentage of such cases. An accurate initial assessment of a struggling, dyspneic patient can make the diagnosis challenging.

Case description: Here, we describe a case of spontaneous internal hemorrhage in the larynx leading to upper airway obstruction in a patient with hemophilia A. The patient was admitted to an intensive care unit for airway observation and treatment with factor VIII supplementation. In the first 24 hours, there was a rapid respiratory improvement. The laryngeal hematoma gradually resolved by the 5th day.

Conclusion: The patient was managed conservatively, and no intubation or tracheostomy was needed.

Clinical significance: Hemophilia A can lead to life-threatening airway obstruction due to isolated laryngeal hemorrhage. Examination and diagnosis can be challenging if the prior history is not known as the condition mimics various other conditions. We need to keep an eye on subtle pointers that instigate an episode of bleeding. Keeping a high index of suspicion with prompt airway control and rapid reversal of coagulopathy can be lifesaving.

Classic hemophilia is a disorder of blood coagulation due to deficiency of factor VIII which plays an essential part in the intrinsic pathway of the clotting cascade. The incidence of hereditary X-linked hemophilia A is 10 per 100,000 males.1

The diagnosis is often made early in life. Milder forms may remain unrecognized until adulthood. Bleeding can be fatal in 5–10% of patients2 depending on severity or location. Airway obstruction can be due to hemorrhage at various locations in the neck namely submental, submandibular, lingual, laryngeal, retropharyngeal, or even mediastinal.3,4

Here, we present a case of isolated laryngeal hemorrhage leading to airway compromise. The patient was conservatively managed in the intensive care unit with factor VIII concentrate.

A 45-year-old male patient presented to our outpatient clinic with drooling and difficulty in swallowing since the last evening. His symptoms began with a sore throat which rapidly progressed to a “hot potato voice” and respiratory distress. There was no history of recent upper respiratory tract infection, fever, allergies, trauma, violent coughing, or sneezing. The patient was known to have hereditary hemophilia A since childhood and had multiple episodes of abdominal pain earlier. He had been on regular treatment and his last factor VIII injection was given 10 days ago. He was also hypertensive but controlled on amlodipine 10 mg once daily (OD). There was no associated joint swelling, tenderness, or abdominal pain associated with this episode. His elder brother had died during childhood following a severe headache that went undiagnosed.

The patient was restless, drooling, and severely dyspneic. On examination with a 70° rigid endoscope, a congested edematous epiglottis was seen (Fig. 1). The patient was not cooperative for a detailed laryngeal examination at this stage.

His oxygen saturation was 94% on room air, blood pressure (BP) 165/104 mm Hg, and pulse 141/minute. He was administered iv hydrocortisone, inj. labetalol, inj. ceftriaxone, and oxygen. Coagulation studies including factor VIII levels were sent. However, the patient showed no improvement in respiratory distress after half an hour.

Even though the patient had recently received his last injection of factor VIII, a strong suspicion of airway obstruction secondary to bleeding in the larynx was kept and he was immediately treated with 3,000 IU of recombinant factor VIII. A 100% correction was done at this time anticipating the need for intubation or tracheostomy in case his condition worsened. In a few hours, there was a moderate improvement in his stridor, but dysphagia persisted. Chest X-ray showed significant narrowing of the upper airway (Fig. 2). Computed tomography (CT) scan revealed thickening and edema involving the epiglottis and aryepiglottic folds causing attenuation of vallecula and bilateral pyriform sinus. There was no evidence of retropharyngeal bleeding (Fig. 3). We elected to carefully follow him in an intensive care unit setting. Flexible fiberoptic examination of the larynx done the next morning revealed persisting edema and hematoma over the epiglottis, aryepiglottic folds, and arytenoids with an airway of 3 mm in diameter (Fig. 4). Since the patient was clinically improving, we continued systemic steroids and antihypertensives. By the fifth day, the hematoma had significantly resolved, the patient was accepting orally and was discharged. 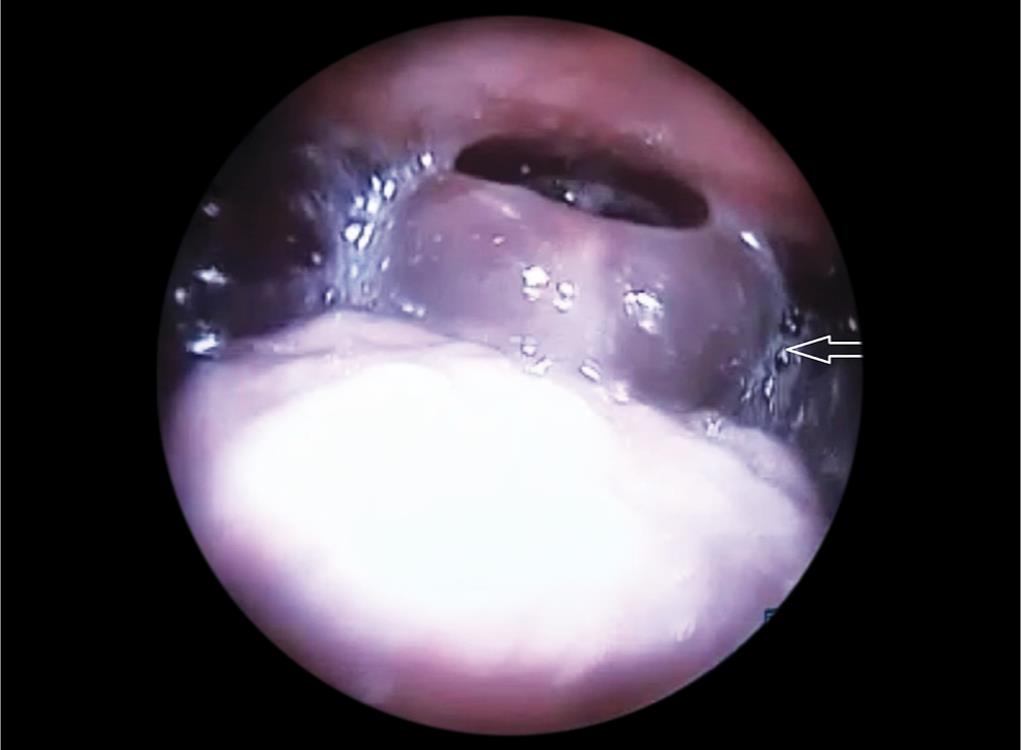 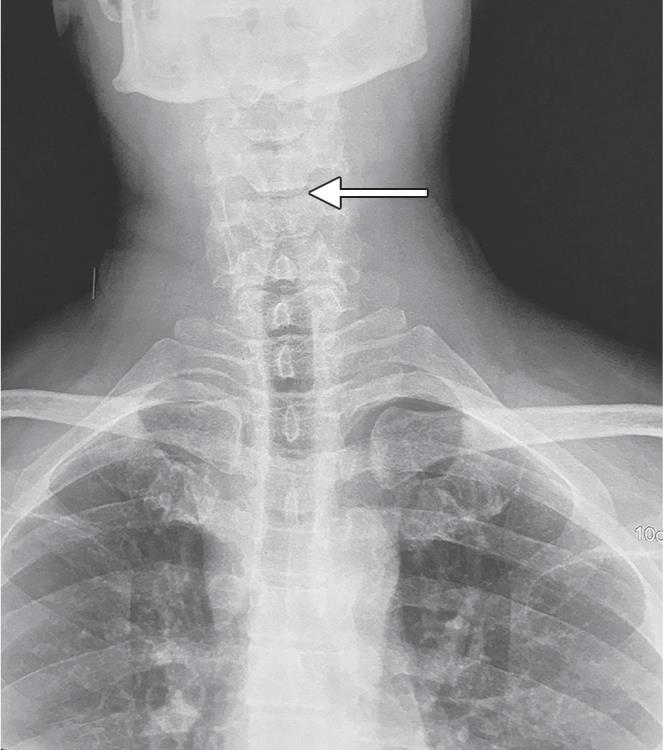 Figs 3A and B: (A) CT scan (sagital views) showing thickening and edema of the epiglottis and aryepiglottic folds causing attenuation of vallecula and no retropharyngeal hemorrhage; (B) CT scan (axial view) narrowing of airway due to intralaryngeal hemorrhage

Hemophilia A is an X-linked recessive disorder and results from factor VIII deficiency. Congenital hemophilia A mostly presents as hemarthrosis, whereas acquired hemophilia presents with bleeding in muscles and mucous membranes. Isolated laryngeal involvement in coagulopathies, though a major complication, is quite under-reported. Complete assessment of a drooling, dyspneic, and agitated patient in the initial stages can be challenging with the added difficulty of mouth opening due to increasing neck swelling, pain, and pressure. In our case, we could only visualize a congested edematous epiglottis as the patient was in respiratory discomfort and not amenable to detailed laryngeal examination. Often such epiglottic edema may be misdiagnosed as an episode of acute sore throat or acute epiglottitis, especially in children. Less commonly, epiglottic cysts, solitary fibrous tumors, schwannomas, neurofibromas, and sarcoidosis may present with isolated epiglottic involvement. Subtle hints in history such as a bout of coughing, an attempt to stifle a sneeze in the background of acute sore throat, and family history of a bleeding disorder may be enough to raise suspicion of a laryngeal hemorrhage in previously undiagnosed cases. Even though the patient may be on regular treatment for hemophilia and recently received factor correction, the possibility of rebleeding (one in three patients),1 and development of antibodies to factor VIII should not be underestimated. A sudden rise in blood pressure was possibly the cause of hemorrhage in our case. The death of a sibling in childhood, due to an undiagnosed severe headache was also hinting toward a family history of bleeding disorder with possible intracranial bleed. Raised activated partial thromboplastin time (aPTT) level, normal prothrombin time (PT), International Normalized Ratio (INR), and platelet count along with low levels of factor VIII can help make a definitive diagnosis. Mixing studies may be required if antibodies to factor VIII are suspected. 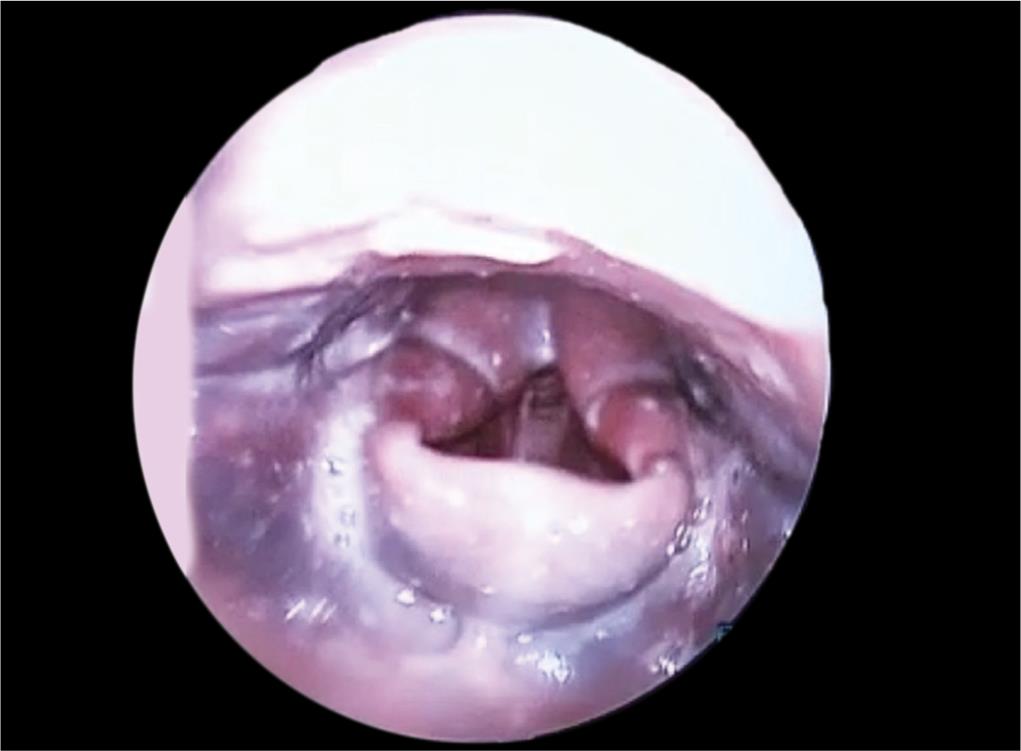 Reaching a correct diagnosis without losing precious time, is imperative in such cases as an evolving hematoma can quickly cause complete airway obstruction and a situation of cannot intubate, cannot ventilate may arise. A review of literature of upper airway obstruction due to hemophilia A suggests various sites of involvement in the neck (Table 1). Cases of isolated laryngeal bleeding without evidence of bleeding at other sites are rare.

A CT scan may be essential to look for retropharyngeal and mediastinal hemorrhage in case of persisting dysphagia or respiratory distress. In most cases, conservative management is the best. Tracheostomy, if planned, should only be attempted after adequate factor correction and with cautery and operation theatre (OT) set up. Intubation may also be challenging in the presence of uncontrolled bleeding and severe laryngeal edema and should always be attempted via flexible bronchoscopy.5

Bleeding complications due to a congenital or acquired coagulation disorder may lead to acute upper airway obstruction and be life-threatening. Infection, coughing, sneezing, and even minor trauma such as in diagnostic procedures, drugs, etc., can be a triggering factor. The physician may not always be lucky to have a prior history of a bleeding disorder when the patient first presents. More often the diagnosis is made in retrospect while managing an unexpected life-threatening event. A case of acute onset of sore throat and dysphagia, which is not responding to antibiotics and worsening rapidly, should alarm the treating physician and a possibility of laryngeal hemorrhage must be kept in the differential diagnosis. A detailed examination can be challenging in most cases and one needs to keep a high index of suspicion with prompt airway control and rapid reversal of coagulopathy.