Thyroid nodule is frequently encountered thyroid diseases and is characterized by growth of abnormal tissues into the thyroid gland. Solitary nodule, defined as palpable, clinically detectable single nodule in otherwise normal thyroid gland, usually presents as asymptomatic mass that is discovered either by patient or clinician.

Materials and methods: Twenty patients meeting inclusion criteria were included in study. Under strict aseptic conditions, using ultrasonographic guidance, fluid from cyst was aspirated and 95% ethanol was slowly (approximately 1 mL/minute) instilled into cavity to a volume of approximately 50% of volume of aspirated fluid. Patients were called for follow-up at an interval of 1 month for 3 months. Ultrasound was done to document volume of cyst, intracystic fibrosis and vascularity.

Conclusion: In the management of benign euthyroid cysts, USG-guided percutaneous ethanol injection is a cost-effective and efficient non-surgical treatment modality with higher success rates. It is a relatively safe procedure with very low or no complication rates and has better patient compliance.

Clinical significance: A non-surgical and cost-effective procedure can be treatment of choice for appropriately selected patient thus beneficial to greater majority of society.

A solitary nodule is defined as a palpable single clinically detected nodule in the thyroid gland that is otherwise normal. Its incidence varies among populations and geographic regions. Epidemiologic studies have shown the prevalence of palpable thyroid nodules to be approximately 5% in women and 1% in men living in iodine deficient parts of the world.

Patients usually seek treatment of benign cystic thyroid nodule for cosmetic reason or due to compressive effect of large nodule resulting in dysphagia.8 Radioactive iodine ablation is effective but requires special equipment and is expensive. Tetracycline instillation has not been proven effective in reducing the size of thyroid cysts.9

Our study is hospital-based prospective study of 1-year duration.

After approval of the Institutional Ethics Committee, the study was conducted over a period of 1 year from April 2013 to April 2014 on selected patients with solitary cystic thyroid swelling, visiting Otorhinolaryngology and Head and Neck surgery outpatient department in a tertiary-care center. All patients with a clinical suspicion of a thyroid nodule were subjected to USG of the neck. In patients having predominantly cystic nodules (i.e., >2/3 of the swelling having cystic component), fine-needle aspiration cytology was performed under strict aseptic conditions. A thyroid profile was obtained in each of them. A total of 20 patients were diagnosed to have non-neoplastic, solitary, euthyroid cyst and were included in the study. Patients included in the study were those having single clinically palpable thyroid nodule, predominantly cystic, with cosmetic or pressure symptoms, above 10 years of age, with no previous history of sclerosant therapy, neck surgery, neck irradiation, or any cardiovascular disease. Bedridden patients, nursing mothers, pregnant women, or patients having malignant thyroid swelling were excluded. Also excluded were patients having septate cysts. It is noteworthy to mention that the size of the cyst was not a selection criterion in this study.

Under strict aseptic condition, using ultrasonographic guidance, fluid from the cyst was aspirated, and 95% ethanol was slowly (approximately 1 mL/minute) instilled into the cavity to a volume of approximately 50% of the volume of aspirated fluid. The injection of ethanol was stopped if ethanol leaked out of the nodule or the patient complained of pain. The needle or catheter was withdrawn, gentle pressure was applied over the puncture site for 10–15 minutes, and the patient was observed for any signs of complications. The patients were discharged same day and called for follow-up at an interval of 1 month for 3 months. At each follow-up visit, the patients were evaluated for any side effects such as scarring and obvious reduction or increment in size of cysts. An ultrasound was done to document volume of the cyst, intracystic fibrosis, and vascularity.

According to the working hypothesis, more than 50% reduction from the baseline volume was accepted as procedural success.

95% ethanol was reinstilled (after 3 months of follow-up) if there was no significant reduction in the cyst volume (i.e., reduction by <50% of the initial volume). Such patients were subsequently called after 1 month to ascertain the results. If even after 3 months of reinstillation significant improvement could not be obtained, then patient was advised for surgery.

The volume reduction rate at each month of follow-up is compared to the pretreatment volume using paired t test and the statistical software used to calculate p value was SPSS software.

The reduction in volume of cysts at first follow-up visit after PEI was found to be statistically significant (p value %3C; 0.05). Further reduction continued even in subsequent visits, and the resulting volume was significantly less than the previous volumes (Table 1).

Second instillation of sclerosing agent (95% ethanol) was considered in only two patients who did not show significant reduction (%3E;50% of initial volume) in their cyst size even after 3 subsequent months of follow-up after instillation of sclerosing agent. After second installation, one of them showed a volume reduction rate of 98.7% and the other showed that of 88.9%, with the mean being 92.39% (Table 2).

In the present study, only 20% (n = 4) of patients complained of transient burning pain at the time of instillation of ethanol in the cyst that was managed conservatively.

Benign cystic thyroid nodules are a commonly encountered entity in day-to-day otolaryngology practice worldwide. In case of benign cystic thyroid nodule, the main reason for seeking medical attention is usually cosmetic or due to compressive effect of large nodule resulting in dysphagia.8 Minimally invasive procedure such as simple aspiration of cyst results in high recurrence rate.6,7 Surgery has advantage of complete cure but is not free of complications.

Tetracycline injections are not effective, and radioactive iodine is costly and requires special instruments.9 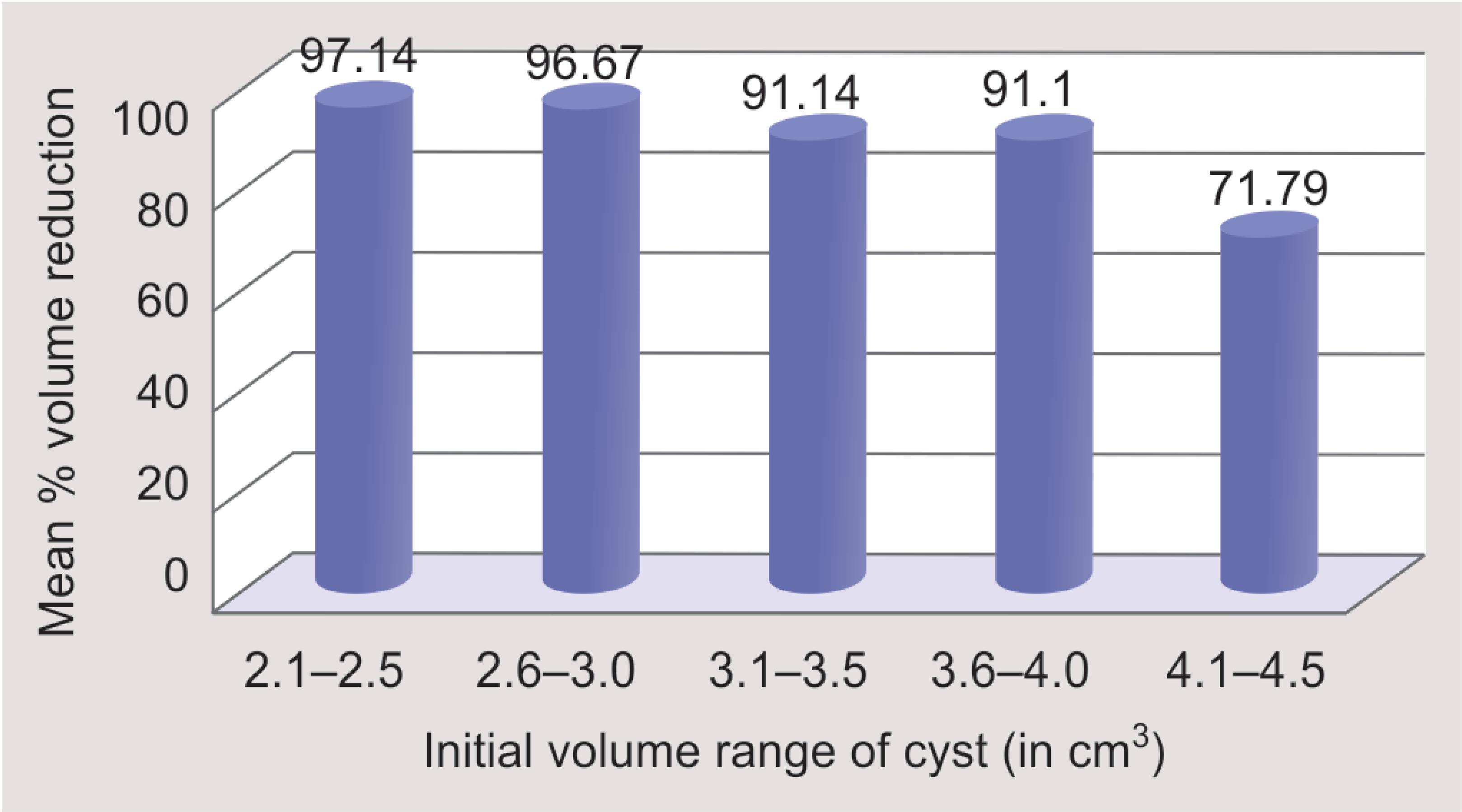 Management of thyroid cysts using sclerosing agent was first reported by Edmonds et al.12 in 1987. Later Rozman et al.,13 in 1989, introduced percutaneous ethanol ablation for cystic thyroid nodules. The proposed mechanism of sclerotherapy was epithelial cell dehydration and protein denaturation. This is followed by coagulative necrosis, reactive fibrosis, and small vessel thrombosis, which results in the obliteration of the cyst.

In a study, Verde et al.14 showed that volume reduction of nodule was greater and more significant in patients treated with ethanol injection than in simple aspiration.

Jayesh in 200917 performed a study in 15 patients. Ethanol was used as the sclerosing agent and was instilled under sonographic guidance. The amount of ethanol injected was about 50% of the amount of aspirated fluid. Follow-up USG was done every month for 3 months. Ethanol was reinjected when there was no significant reduction in the cyst volume. Following ethanol sclerotherapy, 4 (26.6%) of 15 patients showed complete disappearance of the cyst, and 9 (60%) showed significant reduction in the cyst volume (i.e., reduction of cyst volume by ≥50% of initial volume). Only two patients did not show significant reduction in cyst volume; both these patients had nodules with an initial volume of ≥20 cm3. The overall success rate was stated to be 87%. There were no complications attributable to ethanol injection during follow-up. In another study performed by Bennedbaek and Hegedüs18 on 66 patients with recurrent thyroid cystic nodule, using ethanol (instillation followed by emptying) and isotonic saline as sclerosing agents, an overall success rate of 82% was reported in the ethanol group, while the saline group showed only 48% reduction rate.

Higher success rate was recorded in our study (90%) which could be due to difference in selection criteria of thyroid cysts and procedure.

Some authors have recommended aspiration of ethanol shortly (2–10 minute) after its administration. This procedure is more demanding, and usually two injections are required during a session. Kim et al.19 in 2005 studied and compared the therapeutic success rates in both techniques, and the results in the nonaspiration and aspiration groups were almost similar—96% and 93%, respectively, concluding that PEI without aspiration of ethanol-mixed fluid is the preferable method of treatment of benign cystic thyroid nodules from the perspective of both the physician and the patient. In a study by Cho et al.20 and Sung et al.,21 the nonaspiration approach was used, as less volume of ethanol was needed, the procedure was shorter, and another injection was not needed to aspirate ethanol. The reported success rates ranged from 68% by Cho to 100% by Sung.

Comparable results are seen in the present study, where the success rates after 3 months of follow-up were recorded 90% after single session and 100% after second sitting of sclerotherapy using nonaspiration approach of ethanol sclerotherapy.

In 2013, Cetin et al.22 retrospectively evaluated medical files to present the results of 28 patients who were treated by Doppler USG-guided PEI into benign cystic thyroid nodule. Before percutaneous injection of ethanol, malignancies were excluded with fine-needle aspiration biopsy. 95% ethanol solution was injected to about half of the initial cystic volume, and the content of the cyst was aspirated after 10 minutes. At follow-up visits, nodule diameter, formation of fibrosclerosis, and nodule vascularization were evaluated. More than 50% reduction in nodule volume relative to the initial volume was defined as success. They reported 88.5% success rate with single application of PEI. Second installation in unsuccessful cases, increased the success rate to 92.9%. Compared to them, our study shows better results (100% success rate after second instillation), which could be explained by the fact that they used aspiration method of sclerotherapy, but in the present study non-aspiration method of sclerotherapy is used.

Ultrasound-guided PEI was performed in 33 patients by Halenka et al.23 with a success rate of 100% and significantly decreased cyst volume after 1, 3, and 6 months compared to the initial volume. Our study also shows 100% success rate (after reinstallation in nonresponders). It was noted in our study that cyst of <2.5 cm3 showed mean reduction rate %3E;95%, while cysts of >4 cm3 had mean reduction rate of 71%. Hence, it can be said that smaller cysts show better results than the larger ones.

The complications and adverse effects of PEI procedures are caused by ethanol leakage into the surrounding tissues. Most patients report mild temporary pain at the site of injection, radiating into the neck, chin, and ears, due to leakage of a little ethanol into the subcutaneous tissues. In different studies, pain was reported in 2.5% to 30% or, in large cysts, even 70% of patients reported pain. Occasionally, temporary vocal-fold paralysis and dysphonia or, rarely, transient thyrotoxicosis, have been reported.

Apart from transient burning pain at the site of injection, no other serious complications were noted in our study.

In the management of benign euthyroid cysts, USG-guided PEI is a cost-effective and efficient nonsurgical treatment modality with higher success rates. It is a relatively safe procedure with very low or no complication rates and has better patient compliance.