Primary Malignant Melanoma of the Larynx: A Case Report

An 82-year-old male presented to the outpatient department with difficulty in swallowing solids for 6 months that was gradually increasing in nature. He had hoarseness that was gradually progressing over last 6 months and difficulty in breathing for 4 days. There was no history of weight loss, fever, oral bleeding, or any other associated comorbidities such as diabetes or hypertension. There was no relevant family history. The patient was not addicted to alcohol and was a nonsmoker.

General physical examination and other systemic examination were within the normal limit. There was no palpable enlargement of neck nodes and on direct laryngoscopy there was polypoidal, proliferative, lobulated, pigmented growth seen in the larynx, involving the supraglottic region of larynx (Figs 1 and 2).

The patient presented to us with hoarseness, dysphagia, and dyspnea. Tracheostomy was planned. Tracheostomy and biopsy were performed in the same sitting under general anesthesia.

Routine hemogram, blood biochemistry, and chest X-ray were within the normal limit. No evidence of any cutaneous skin lesion was found. Ultrasonography of the whole abdomen was performed to rule out any suspected visceral lesion.

Contrast enhanced computed tomography (CECT) neck is suggestive of the ill-defined asymmetric soft tissue thickening in the right posterior pharyngeal wall causing mild encroaching up to the pharyngeal lumen (? Neoplastic). Advised for biopsy. Direct laryngoscopy and debulking of mass was done under general anesthesia. The excised mass was sent for histopathological examination (Fig. 3).

Histomorphology revealed a polyp with an infiltrating malignant neoplasm in the submucosa. The tumor cells are round to oval to spindle with moderate nuclear pleomorphism and cytoplasmic melanin pigment and nuclear predominance. Immunohistochemistry suggested immunoreactivity with diffuse positivity for Melan-A, S-100 protein, HMB-45, and vimentin against a pleomorphic background of malignant melanoma. 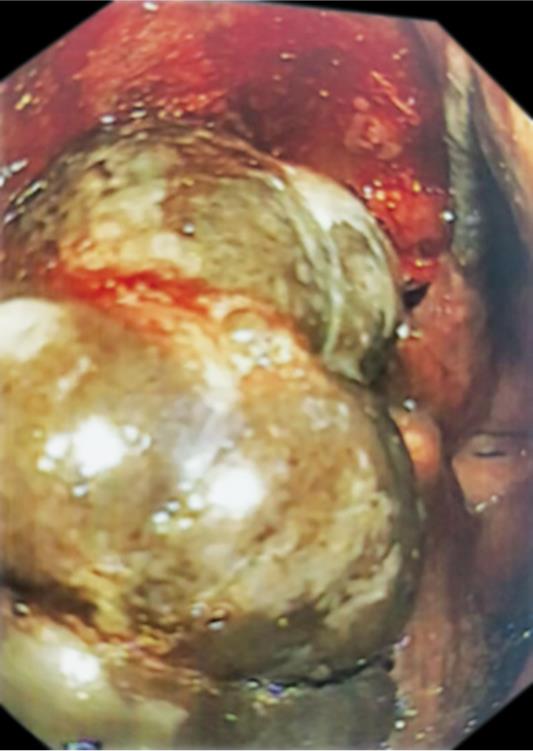 Figs 2A and B: Polypoidal pigmented growth involving the supraglottic region of larynx 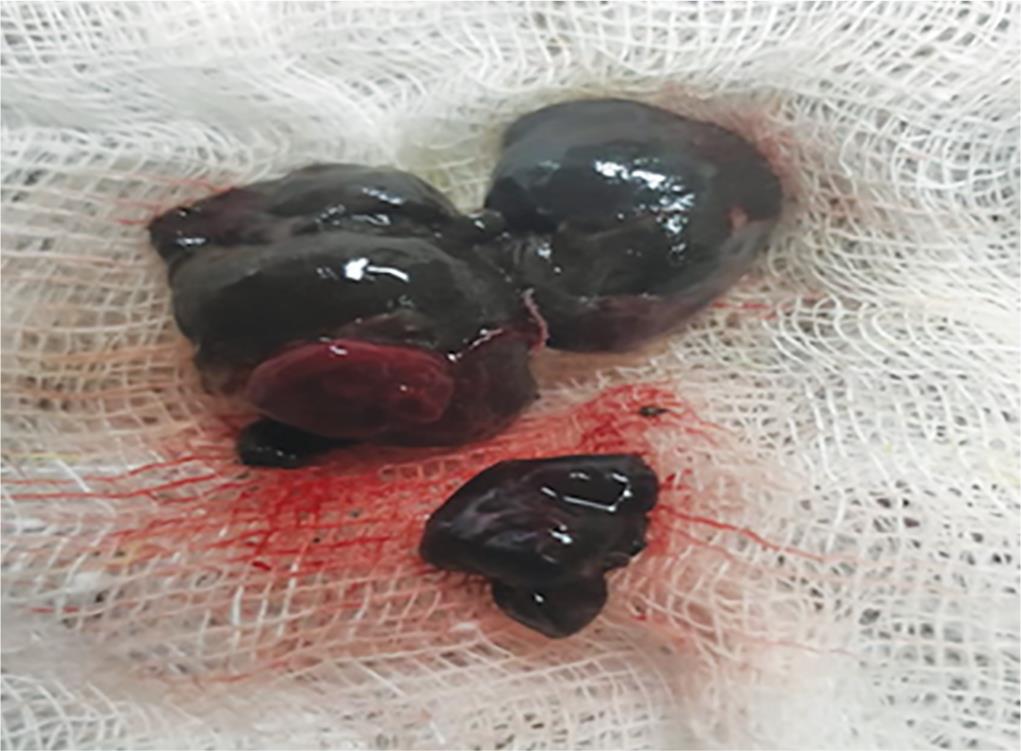 Given the fact that the patient is more than 80 years and total laryngectomy even if technically possible but perioperative complications will have significant morbidity at this age. Relatives were counseled about the role of radiotherapy in this condition, attempted as a palliative measure. Malignant melanoma of the head and neck is aggressive and carry a poor prognosis.

Melanocytes are neuroectodermal in origin. Usually migrate to ectodermal and mucosal structures such as skin, uveal tract, retina, and other ectodermal structures. Very rarely they migrate to nasopharynx, larynx, or tracheobronchial mucosa. This explains the rarity of this disease in these locations.

The first case of noncutaneous melanoma was described in 1856 by Waber,4 but distinct entity was given by Luke in 1869.5 In the past, no clear distinction regarding the origin as primary or metastatic was made in the literature. Primary melanomas are very rare neoplasms and are diagnosis of exclusion against a background of positive histopathology. The etiopathogenesis of primary mucosal melanomas has not yet been fully elucidated. The growth pattern of primary mucosal melanoma of the larynx in our case resembles a polypoidal pattern. Classification according to depth (Breslow) is not suitable for these kind of locally advanced disease at presentation. The tumor, node, metastasis (TNM) system is advocated for most head and neck cancer including melanomas.6 No T1-2 or stage I and stage II was included in American Joint Committee on Cancer (AJCC) as mucosal noncutaneous melanomas are aggressive tumors in the head and neck. Because of their aggressive biology, prognosis still remains grave despite adjuvant treatment. Older mean age of presentation and associated age-related comorbidities concern radical surgery. Because of the rarity of primary laryngeal melanomas, every reported case is important for understanding the natural course of disease, presentation, tumor biology treatment, and prognosis for establishing guidelines for further management of the disease.