Background: Knowledge of the site of obstruction and the pattern of airway collapse is essential for determining correct surgical and medical management of patients with obstructive sleep apnea (OSA). To this end, several diagnostic tests and procedures have been developed. These include endoscopic and imaging modalities. However, the latter is not practical as it has issues of logistics and feasibility. The former includes routine awake flexiblescopy (FS) in outpatient department and drug-induced sleep endoscopy (DISE). This study intends to compare the incidence of epiglottic fall, which is the most common laryngeal cause of OSA, in routine awake FS vs DISE.

Materials and methods: Thirty patients with OSA were prospectively enrolled in this sectional analytic study. All underwent proper history taking, ENT evaluation including awake FS with Muller’s maneuver, polysomnography, and DISE. The upper airway collapse was documented as per velum oropharynx tongue base epiglottis (VOTE) classification.

Conclusion: Drug-induced sleep endoscopy is a more accurate diagnostic option for detecting the level of obstruction and degree of collapse, especially laryngeal collapse in OSA than FS.

Obstructive sleep apnea (OSA) is a sleep disorder characterized by repetitive episodes of cessation (apnea) or reduction (hypopnea) of airflow in the upper airway, due to its increased collapsibility occurring during sleep.1 High rate of morbidity and mortality accompany this, due to cardiovascular outcome, the risk of occupational and automobile accidents, and poor quality of life, with neurocognitive impairment.2,3 Hence, it is considered as a public health problem.

Numerous investigative modalities have been used to know the pathophysiology of upper airway obstruction in patients with OSA, including CT/MRI scanning and acoustic reflection. The gold standard investigation is considered to be polysomnography, which provides information about the OSA severity and degree of sleep fragmentation, but without giving any information regarding the level and degree of airway collapse.4

Determining the location of the upper airway obstruction during sleep is the main diagnostic challenge in patients with OSA.5 Flexiblescopy (FS) using Muller’s maneuver helps to assess the level and degree of upper airway during forced inspiration with patient’s mouth and nose closed, but it may not reflect the exact occurrence during sleep.6

To tackle this, drug-induced sleep endoscopy (DISE) was introduced to the diagnostic algorithm with its highlight being the ability to provide dynamic visualization of anatomic areas responsible for generation of noise and obstruction under condition mimicking sleep.7 The advantage of DISE is that upper airway collapse, which is not visible due to neuromuscular compensation in awake patients, can be observed during sleep and treatment advocated according to the location and degree of obstruction of the upper airway.8,9 Laryngeal collapse, which is a cause of continuous positive airway pressure (CPAP) intolerance, often not visible in FS can be diagnosed during DISE. It helps in identifying CPAP intolerance in OSA.10 So, the approach of accurate diagnosis of the site and degree of upper airway obstruction and therapy targeted according to that would result in tremendous treatment outcome in patients with OSA.

The primary objective of this study is to compare the incidence of epiglottic fall as seen in routine FS vs DISE.

To compare the incidence of epiglottic fall as seen in routine flexiblescopy vs DISE.

Approval was obtained from the Institutional Ethics Committee for a prospective cross-sectional study among patients with OSA. The study was conducted in the Department of ENT of Amrita Institute of Medical Sciences, Kochi, with a duration of 2 years between August 2017 and August 2019. Informed consent was taken from all the patients.

Selection and Description of Participants

Thirty patients with OSA between the ages of 18 and 65 were prospectively enrolled in this cross-sectional study, with the male-to-female ratio of 28:2.

The exclusion criteria were pregnancy and dexmedetomidine allergy.

Patient history was taken with an emphasis on snoring and OSA symptoms. Snoring severity was assessed using sleep snoring scale (SSS), and daytime sleepiness was assessed using Epworth sleepiness scale (ESS). Body mass index was calculated. A detailed otorhinolaryngologic investigation was done including flexible nasopharyngolaryngoscopy (FS) with Muller’s maneuver (i.e., by maintaining maximal inspiration with an open glottis against closed oral and nasal airways). Then these patients were sent for polysomnography, which was conducted and scored according to the standards of the American Academy of Sleep Medicine. Apnea hypopnea index (AHI) was the major parameter derived out of that, and OSA was graded as mild (AHI 5–15), moderate (AHI 15–30), and severe (%3E;30). Then the patients selected as per inclusion criteria were sent for DISE, and the findings observed in flexiblescopy and DISE were compared.

Drug induced sleep endoscopy was performed in the operation theater. Sleep was induced with standard.

Dexmedetomidine infusion with a starting dose of 1.5 μg/kg over 10 minutes followed by maintenance infusion at a rate of 1.5 μg/kg/hour. The target level of sedation was a stage with no response to verbal stimuli and arousal to tactile stimuli. After attaining adequate sedation, a flexible fiber optic nasal endoscope was passed through the nostril to inspect the entire upper airway. Dynamic collapse in the upper airway was evaluated with the observation window being velum, oropharynx, tongue base, and epiglottis. Then the upper airway collapse was classified as per VOTE classification (Fig. 1). The estimated degree of airway collapse was described quantitatively as a percentage change in cross-sectional airway area and divided into quartile groups of %3C;25% (grade I or I+ collapse), 25–50% (grade II or II+ collapse), 50–75% (grade III or III+ collapse), and %3E;75% (grade IV or IV+) collapse. Then, the findings seen in awake flexiblescopy and DISE were compared.

Statistical analysis was done using IBM SPSS Statistics 20 Windows (SPSS Inc., Chicago, IL, USA). The results are given in mean ± SD for all continuous variables and in frequency (percentage) for categorical variables. McNemar’s Chi-square test was used to find the significant difference in the incidence of epiglottic fall as seen in routine flexiblescopy vs DISE. To assess the agreement between flexiblescopy and DISE, Cohen’s kappa analysis was performed.

Patient demographics are mentioned in Table 1. 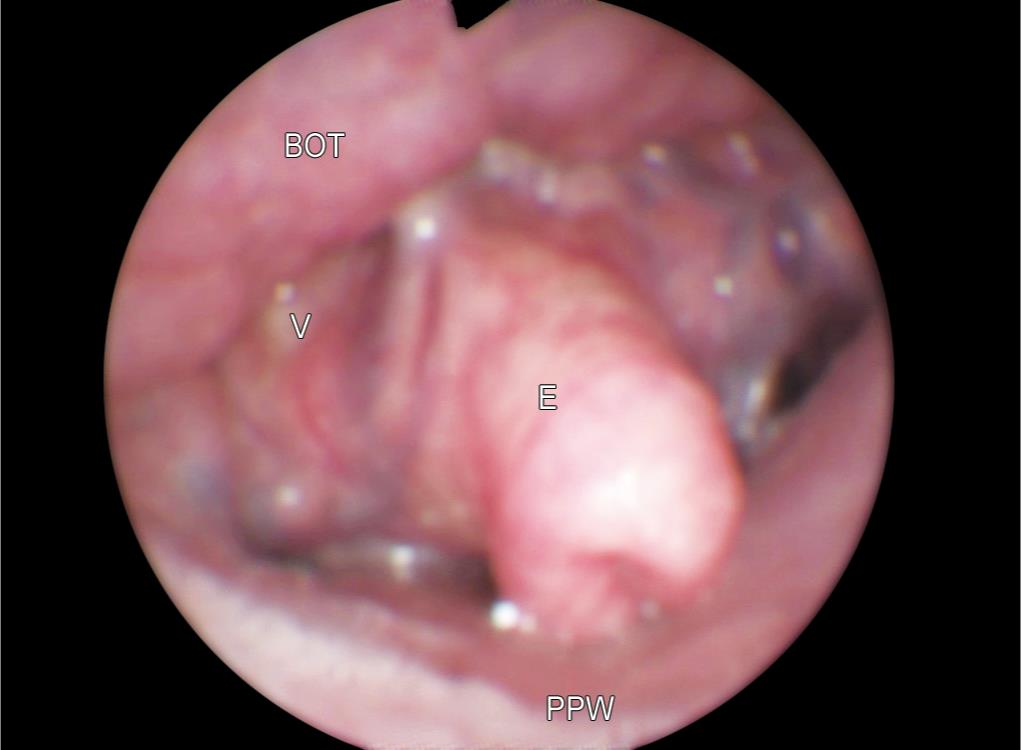 The incidence of epiglottic collapse seen in FS was 6.7% (2 patients) and in DISE was 40% (12 patients). The comparison of epiglottic fall as seen in DISE and flexiblescopy is given in (Table 3). The difference in the frequency detected by the two methods found to be statistically significant as p value was 0.002. Kappa agreement was found to be 0.19, which shows only a slight agreement.

The ability to correctly identify severe collapse at each of the different levels of the upper airway has become essential in guiding the correct surgical management of patients with OSA. Furthermore, new multilevel approaches to OSA surgery have now resulted in improved outcomes compared with single level procedures.11

Different levels and increase in the severity of obstruction in OSA can be assessed more precisely by doing DISE.12,13 It is also reported that the initial management plan was changed in many OSA patient after DISE.10,12

In our study, a statistically significant difference was noted (p value 0.002), while comparing the frequency of anteroposterior epiglottic collapse observed in flexiblescopy and DISE, and only a slight agreement was noted between these two methods. This was consistent with the study by Yegïn et al., which showed a lack of concordance in the frequency of anteroposterior epiglottic collapse detected by the two methods with only slight agreement (k = 0.107).13 As pathology of larynx was observed in 40% of patients, the role of larynx in OSA can be concluded to be significant and often underdiagnosed. The reason is that collapse of the epiglottis is usually not seen when the patient is awake.10 The significance of detecting laryngeal collapse by DISE and its role in CPAP failure and targeted therapy and successful treatment outcome was reported by Hybášková et al.10,12,14,15

The most common type of epiglottis pathology in our study was collapsing of the epiglottis on the posterior wall of hypopharynx during inspiration. This type of collapse is termed the “closing door epiglottis”12 (Fig. 1).

Limitations of the Study

Although it is an OT procedure, DISE should be done in selected cases of OSA.

Approval was obtained from the Institutional Ethics Committee. It is a part of dissertation study.