A Study of Rehabilitation of Speech in Post-laryngectomy Cases, as Seen in a Tertiary Care Institution of Esophageal Speech vs Speech with Tracheoesophageal Puncture Prosthesis

How to cite this article Anton Dev X, Saha S. A Study of Rehabilitation of Speech in Post-laryngectomy Cases, as Seen in a Tertiary Care Institution of Esophageal Speech vs Speech with Tracheoesophageal Puncture Prosthesis. Int J Phonosurg Laryngol 2019;9(2):36–39.

Aim: To assess the preference of the different modalities of post-laryngectomy speech rehabilitation in patients and review the outcome parameters of esophageal speech and tracheoesophageal puncture (TEP) prosthesis modalities in comparison with the corresponding existing data.

Materials and methods: A longitudinal prospective study conducted over a period of 1 year in the Department of ENT and Head-Neck Surgery in a tertiary care hospital. Patients of advanced laryngeal malignancies that were planned for total laryngectomy were included in this surgery. Based on the patients’ choice different modalities were adopted and the patients were followed up with regular training. Maximum takers were for esophageal speech followed by TE puncture and prosthesis insertion, and the outcomes in these two modalities were evaluated in detail. Six outcome parameters were assessed for the patients and consolidated. Then they were compared with the corresponding values obtained from previous studies to arrive at the results.

Conclusion: In the present scenario until more advanced modalities of post-laryngectomy speech rehabilitation become more easily accessible to and affordable for the economically weaker sections of the society, esophageal speech modality is a dependable alternative. Further with proper training and follow-up, results with esophageal prosthesis are promising.

It is curative as well as palliative. Larynx is the second most common site for cancer in the whole of aero-digestive tract. The most common malignancy affecting larynx is squamous cell carcinoma. After total laryngectomy there is a profound alteration in the life style of a patient. The patient is unable to swallow normally, associated with profound changes in the pattern of respiration. Olfaction is also affected.

The requirements of normal phonation are:

The vibrations of the vocal folds are complex in nature and are known as the glottic cycle. This cycle involves glottic opening and closing at set frequencies determined by the subglottic air pressure.

There are three methods of alaryngeal speech. They include (1) esophageal speech, (2) electrolarynx, and (3) neoglottic reconstruction/shunt procedures.

Nearly 40% of patients fail to acquire esophageal speech even after prolonged training.

Common causes of failure to develop esophageal voice are:

Electrolarynx (Fig. 1): These are electrical vibrating devices which are to be held in the submandibular region. Muscular contraction and facial tension can be modified to generate rudiments of speech. The initial training phase to use this machine must begin even before the surgical removal of larynx. This helps the patient in easy acclimatization after surgery. 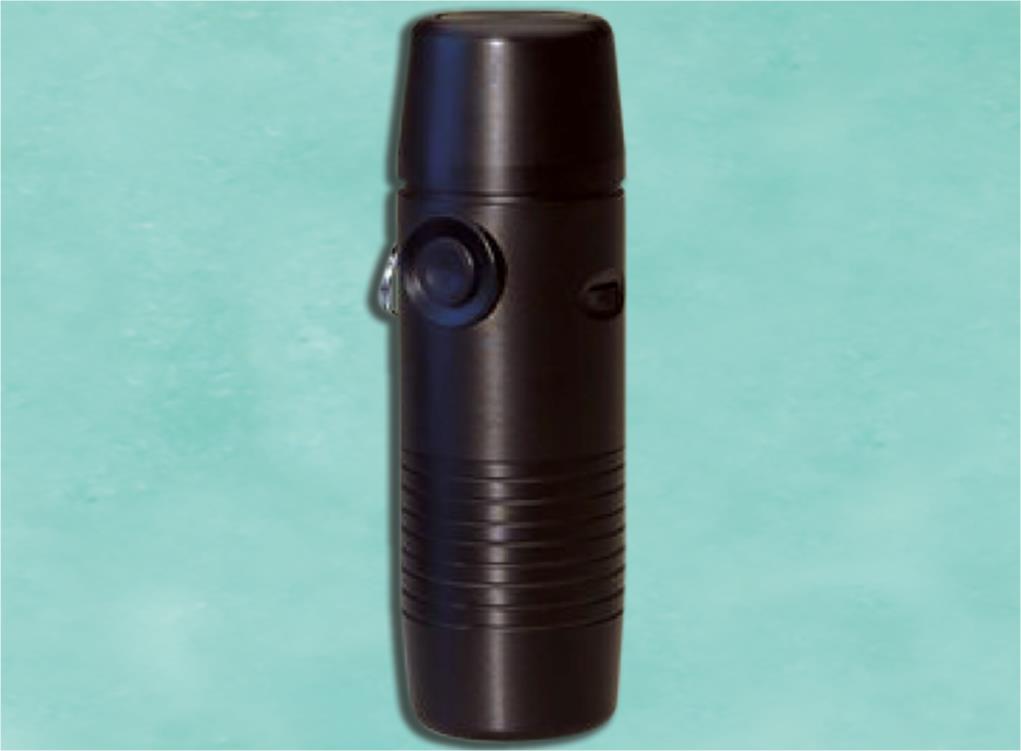 Three types of electro larynges are available.5 They are:

The major disadvantage of the electrolarynx is their mechanical quality of speech. There is also a certain degree of stomal noise. With practice a patient can reduce stomal noise by placing fingers over the stoma during phonation. These instruments are expensive and need to be maintained.

In the early days there were several attempts to develop a reliable tracheohyoidpexy procedure which could restore voice function in patients who has undergone total laryngectomy. Most of these techniques were abandoned due to complications.6

This technique involves the creation of a shunt between trachea and esophagus. This technique was first developed by Guttman in 1930.7

Creation of a shunt between trachea and esophagus usually failed because of (1) aspiration through the fistula or (2) closure of fistula.

This procedure for restoration of speech in patients who have undergone total laryngectomy was first introduced by Blom and Singer in 1979.8

Tracheo-esophageal puncture (TEP) can be performed either immediately after laryngectomy (primary TEP) or 6 weeks following successful laryngectomy (secondary TEP). It should be stressed that radiotherapy poses no threat to TEP. This procedure initially was reserved for patients who have failed to acquire esophageal speech even after prolonged efforts and are displeased with the voice produced by the artificial larynx. Currently primary TEP is becoming a preference as a first-line modality. The major problem with silicon prosthesis is candida growth.9

This longitudinal prospective study was conducted at the Department of ENT, Calcutta National Medical College, from May 2017 to April 2018. In our study the patients who were undergoing total laryngectomy due to laryngeal malignancy were included. All ages and both sexes were included in the study. Our study mainly focused on the patients undergoing the esophageal speech mode of rehabilitation as opposed to those undergoing T-E puncture and TE prosthesis insertion. 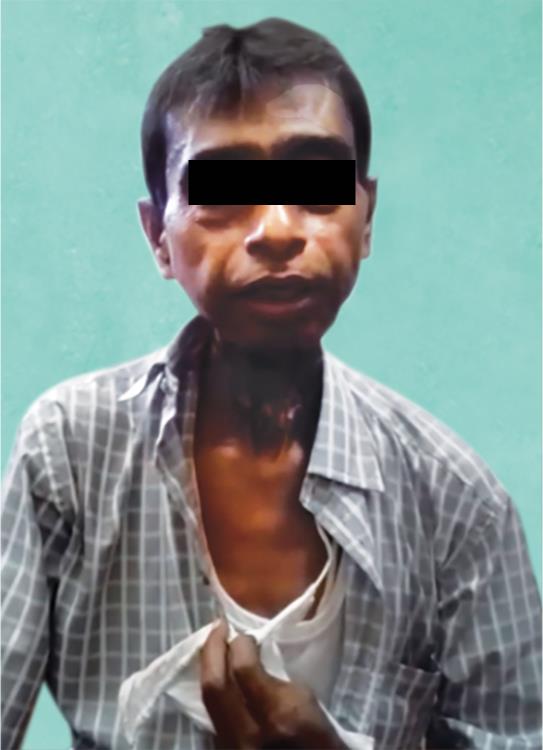 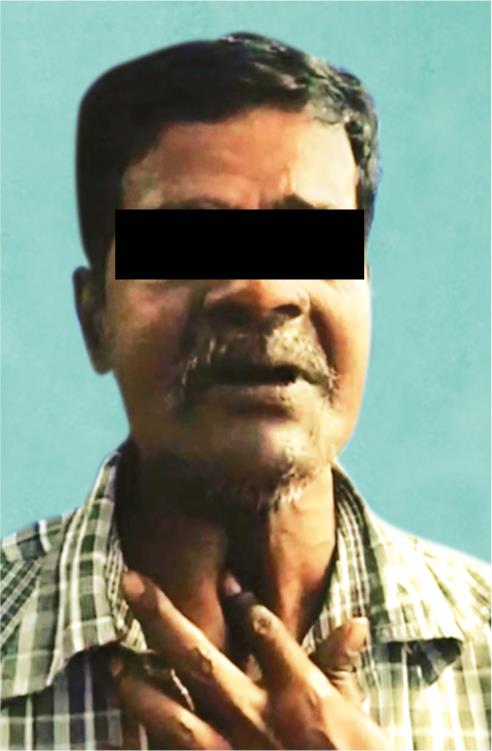 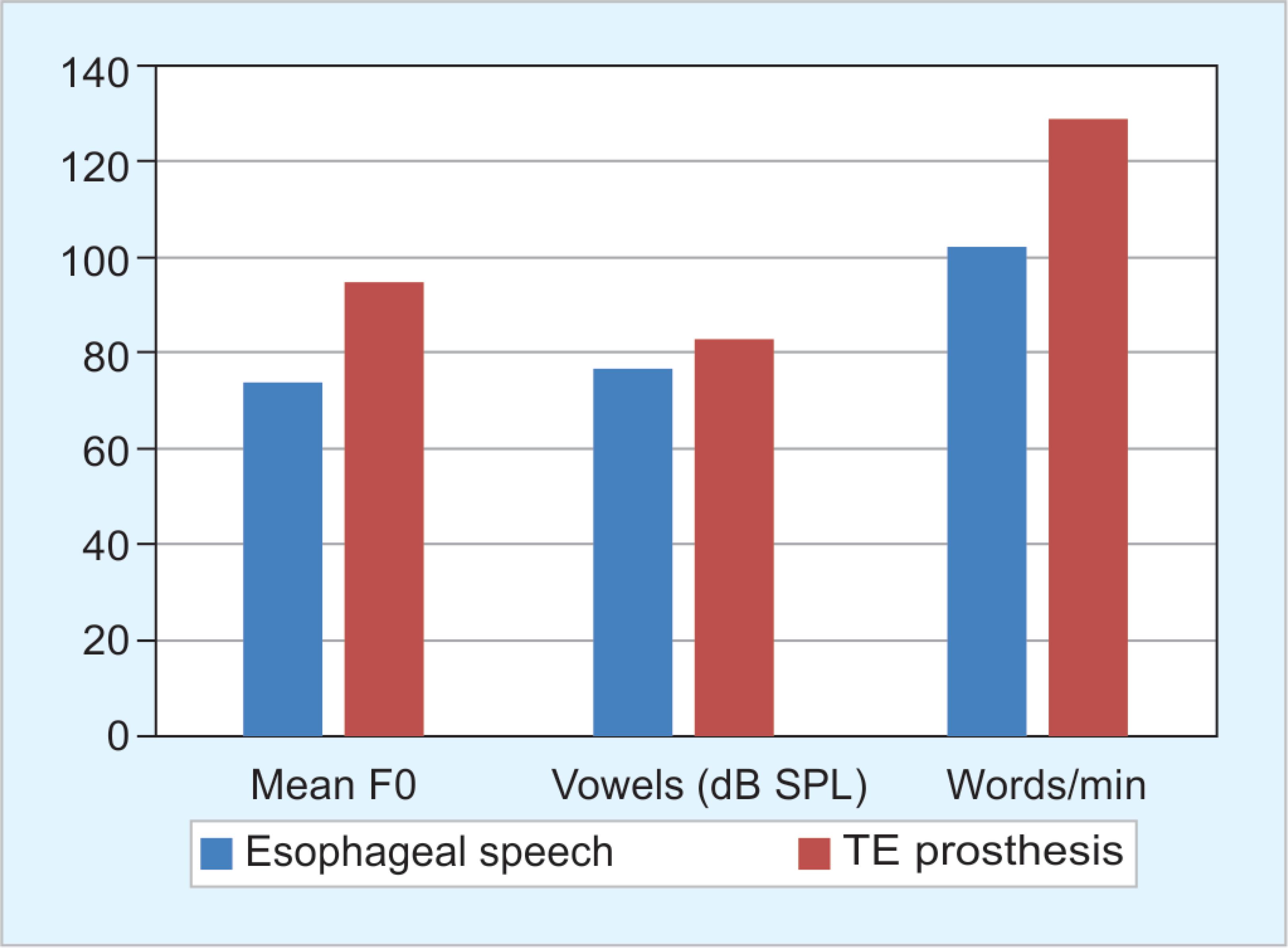 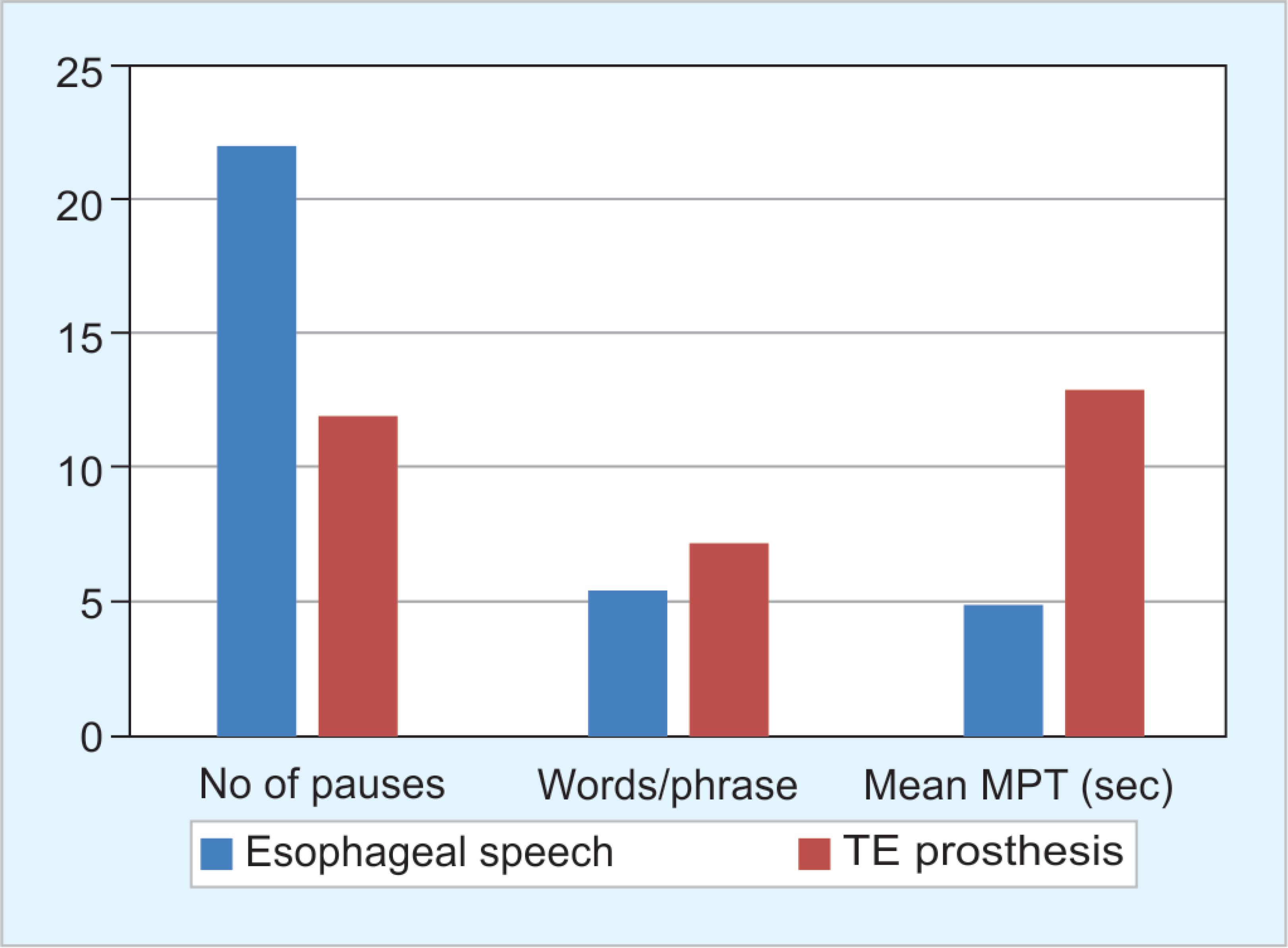 The outcome in both groups was assessed in terms of the following variables:

These vocal outcome parameters were accumulated and evaluated for the patients in the two groups and the final results were compared between the two groups.

Upon comparing the speech outcome parameters of the patients of esophageal speech with those of T-E prosthesis patients, we see that

From our observations it is clear that