Outcome Analysis by Voice Assessment and Videostroboscopy in Laryngopharyngeal Reflux

How to cite this article Upadhyay A, Singh A, Shrivastava A, et al. Outcome Analysis by Voice Assessment and Videostroboscopy in Laryngopharyngeal Reflux. Int J Phonosurg Laryngol 2019;9(2):25–29.

Materials and methods: A prospective study in 50 subjects at a tertiary referral center who were subjected to answer a questionnaire of the voice handicap index, the reflux symptom index, and assessed reflux finding score and vocal fold mucosa changes by videostroboscopy. All subjects were reassessed after 12 weeks of treatment.

Result: Improvement was found statistically significant (%3C;0.05) in all parameters and scales.

Conclusion: Preventing the insult by acid reflux in the laryngeal mucosa by proton pump inhibitors resulted in improvement of symptoms and signs, which proves the efficacy of treatment. Videostroboscopy is a useful tool to early diagnose the lesion.

The retrograde movement of gastric contents into the larynx, the pharynx, and the upper aerodigestive tract is called laryngopharyngeal reflux (LPR). It is known to produce symptoms like hoarseness, globus, dysphagia, otalgia, and laryngospasm and may result in contact granulomata, esophageal webs, and pachyderma.1 Most of time this phenomenon can result in very subtle finding like arytenoid erythema, which is extremely commonly seen in the laryngology practice.1 This condition is prevalent in a large number of patients seeking laryngology consult for various indirect symptoms.

The objective of this study is to assess the etiological role of laryngopharyngeal reflux (LPR) in patients with change in voice and analyze the effectiveness of 3 months antireflux medication along with voice therapy.

This study was conducted at the ENT Department, MGM medical college, Indore. It is a prospective study designed to study objectively the etiological role of LPR in patient presenting with change in voice or hoarse voice and to analyze the effect of antireflux medication using the voice handicap index for the voice prognosis parameter, the reflux symptom index (RSI) for the LPR symptom indicator, and the reflux finding score (RFS) and stroboscopic parameter to assess the signs and improvement objectively.

A total of 50 patients were selected with the chief complaint of change in voice, and clinical diagnosis of laryngopharyngeal reflux was confirmed by the RSI (Table 1) and the RFS (Table 2), both initially developed by Belafsky et al.2 patients with RSI %3E;13 and RFS >7 were enrolled. All patients were prospectively evaluated before treatment and 3 months after treatment with proton pump inhibitors twice daily, stream inhalation, and voice therapy.

Each patient underwent a comprehensive history taking, filling a simple questionnaire form for RSI and physical examination including rigid laryngoscopy with stroboscopy and laryngeal photodocumentation and determination of the RFS at every visit.

Improvement in RSI, VHI, RFS, and stroboscopic parameters was assessed. The paired sample t test and the Chi-square test were used for assessment of the above criteria, respectively.

Male preponderance with 56% patients were males. 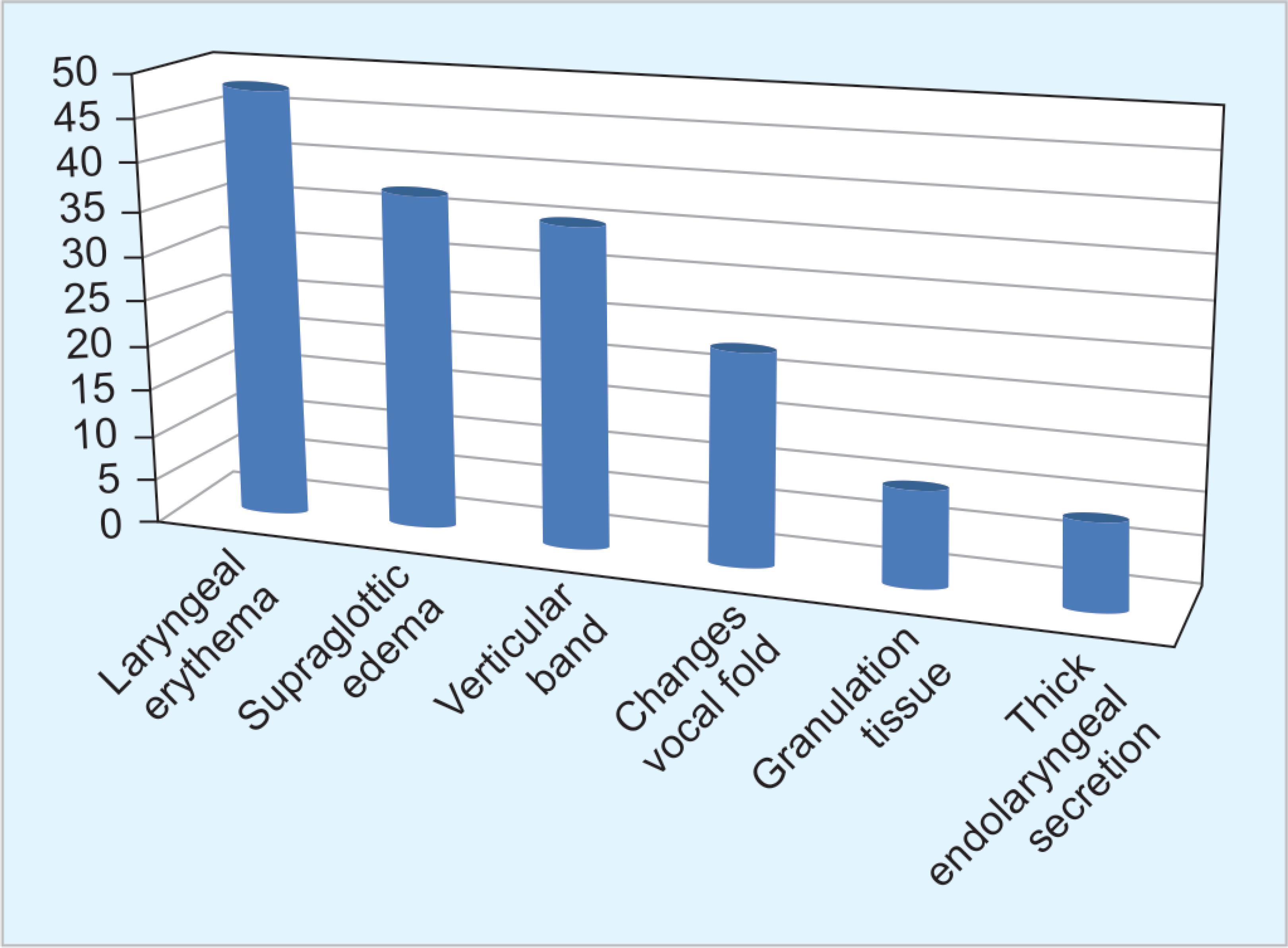 Fig. 1: Spectrum of laryngeal pathology in the study

The videostroboscopic analysis showed an asymmetric mucosal wave in 23 patients out of which 12 patients had reactive lesions over the vocal fold, 7 had sulcus, 5 patients has nodule, and after treatment the asymmetry was found only in 4 patients. There was focal absence of the mucosal wave in 14 patients; this may be due to extension of insult due to acid reflux involving layers deeper than the vocal fold mucosa or due to bulky lesion restricting mobility of mucosa; after treatment the focal asymmetry of mucosal wave still found in 4 patients (Figs 2 to 8). Incomplete glottic closure was found in 38 patients mostly due to laryngeal edema result in incomplete touching of vocal folds, reactive lesion elevated margins touching early, nodules making hourglass shape closure, it reduced to only six patients after treatment, which was statistically significant improvement.

Around 46% patients had inflammatory changes over the vocal fold, which include vocal fold edema, leukoplakic patches, nodules, and sulcus. The granulation tissue was found in 20% of patients mostly involving posterior commissure, which is suggestive of chronic insult by the irritant, which is most likely to be acid reflux in this study. Around 18% of patients show thick endolaryngeal secretion.

Laryngopharyngeal reflux is a common cause of voice impairment and chronic laryngitis. In past three decades, many studies have investigated the LPR signs and symptoms, diagnosis, medical and surgical treatments, and pathophysiological mechanisms underlying the development. But due to poor and inaccurate documentation and lack of observation by practitioners, voice disorders tend to be prevalent and also disabling for patients. Thus, Lechien et al.3 in his studies demonstrated significant differences in LPR patients concerning subjective (dysphonia and VHI) and objective (aerodynamic and acoustic) voice assessments in comparison with healthy subjects. The study of pH monitoring done by Belafsky et al.4 developed RSI and RFS2 for the diagnosis and follow-up of LPR signs and symptoms. Park et al.5 found both scales are readily administered, highly reproducible, and exhibit excellent construct- and criterion-based validity. In this study, we found that RSI and RFS improved significantly after 12 weeks of PPIs and steam inhalation and voice therapy. These findings are in accordance with previous studies by Jin et al.,6 Masaany et al.,7 Naiboglu et al.,8 Chun et al.,9 and Lechien et al.,3 which observed the decrease in RSI and RFS after PPI and diet treatment.

In this study, we did not use pH meter for confirmation of reflux due to many limitations like inconvenient for large number of subject, cost and availability of equipment, and lack of consent for such test. We took history and chief complains as criteria for subjects and clinical scales proposed by Belafsky et al.

Voice change was one of the chief complaints we consider in this study. We took VHI as a parameter to assess voice improvement after treatment and found almost 15 score difference in the pretreatment and the posttreatment group (pretreatment group was 34 ± 4.6, which was significantly higher than the mean RSI for the posttreatment group, 19.04 ± 3.50). Siupsinkiene et al.10 also reported the interest to use VHI as an outcome of the efficacy of the PPI treatment in LPR patients. Lechien et al.3 reported similar results in VHI in LPR patient after 12 weeks of therapy and diet modification. 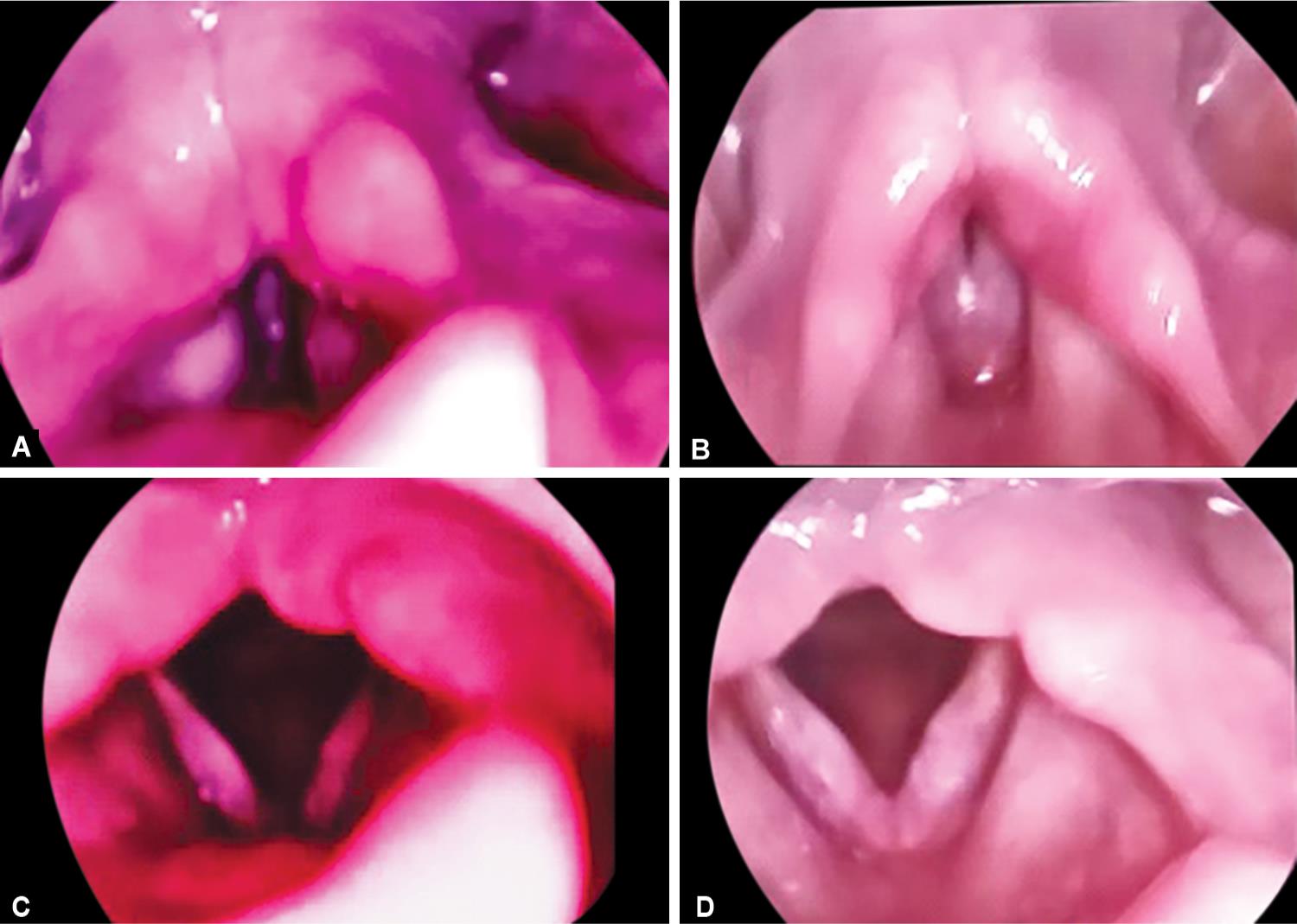 Figs. 2A to D: Generalized hyperemia, edema and granular changes improved after 3 months of treatment 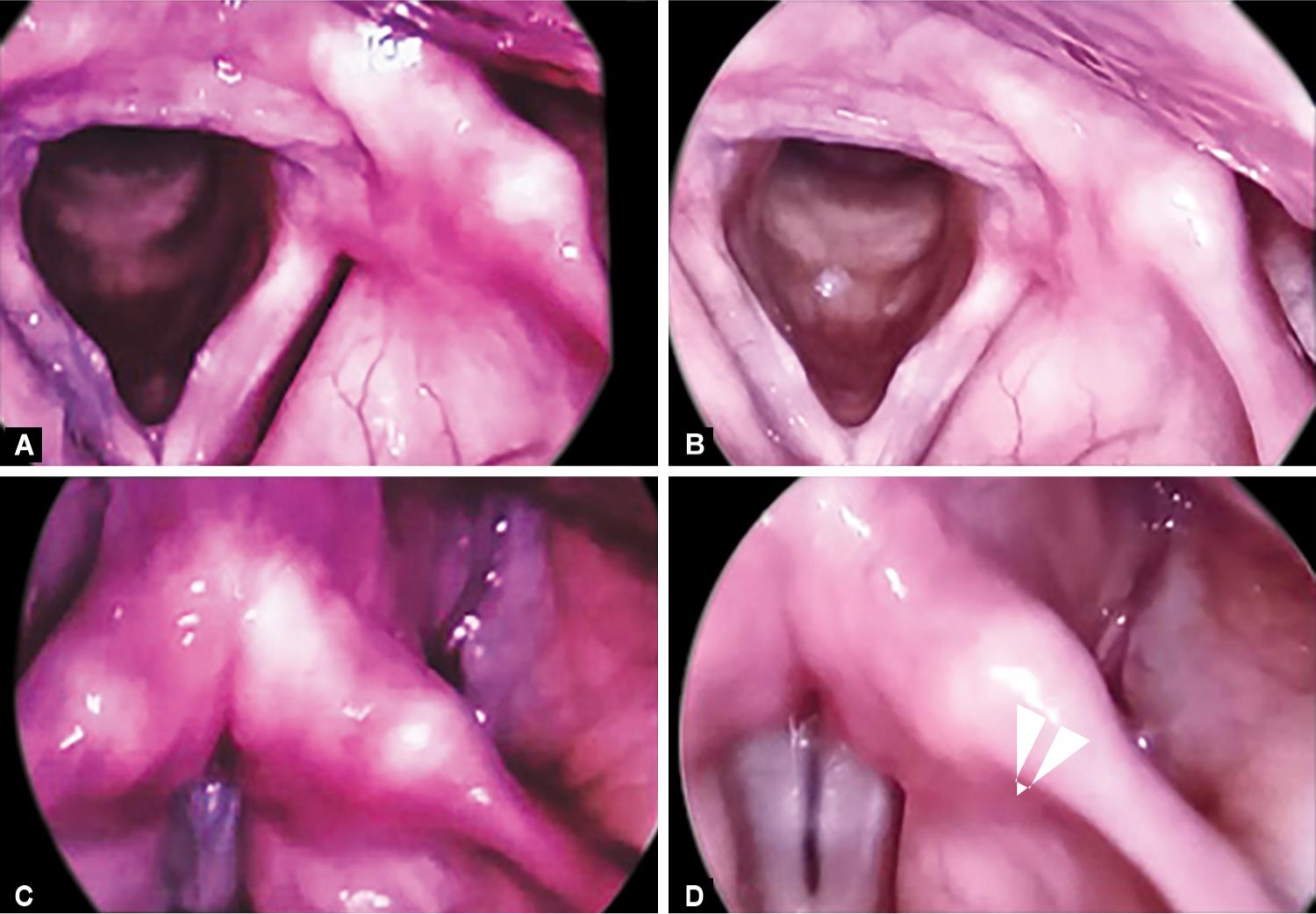 Figs. 3A to D: Reactionary lesion over vocal fold improved after treatment 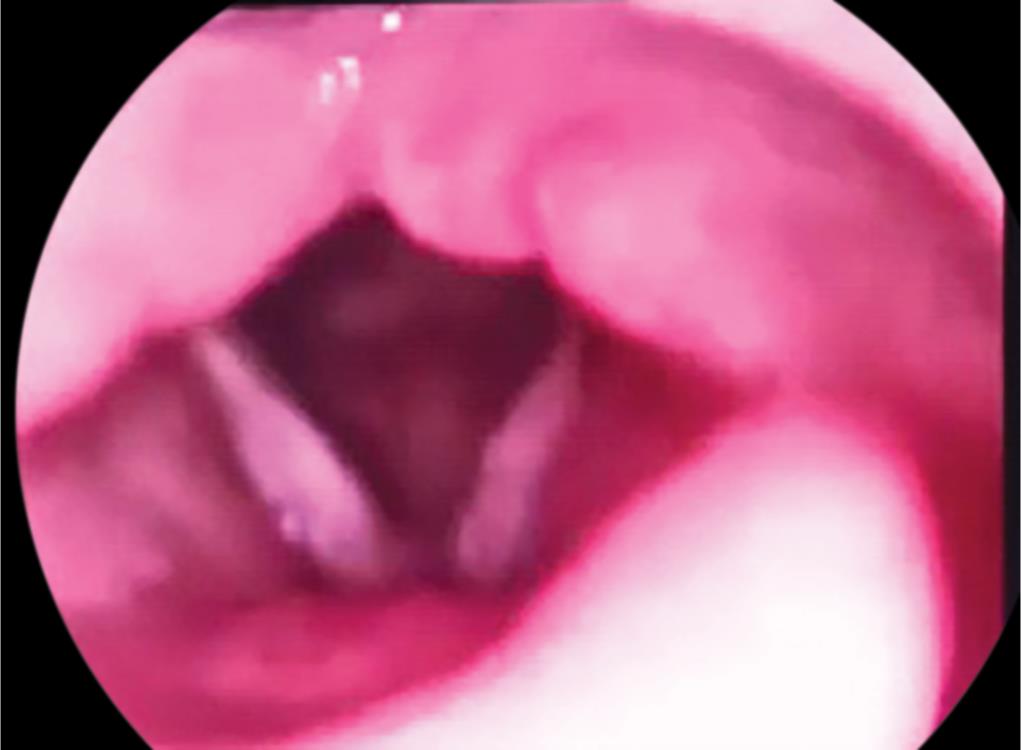 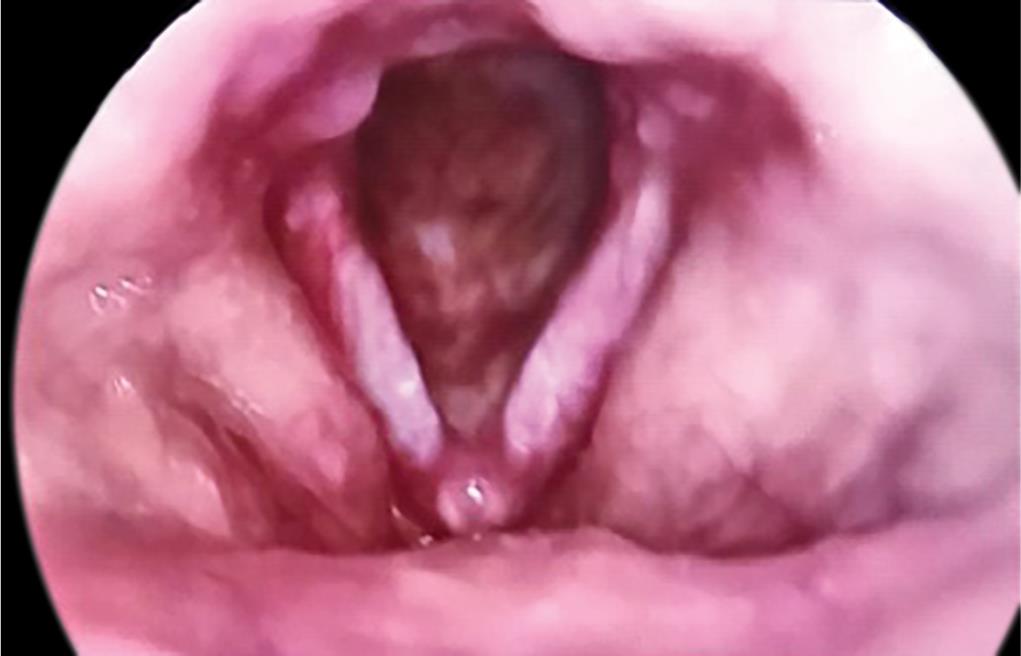 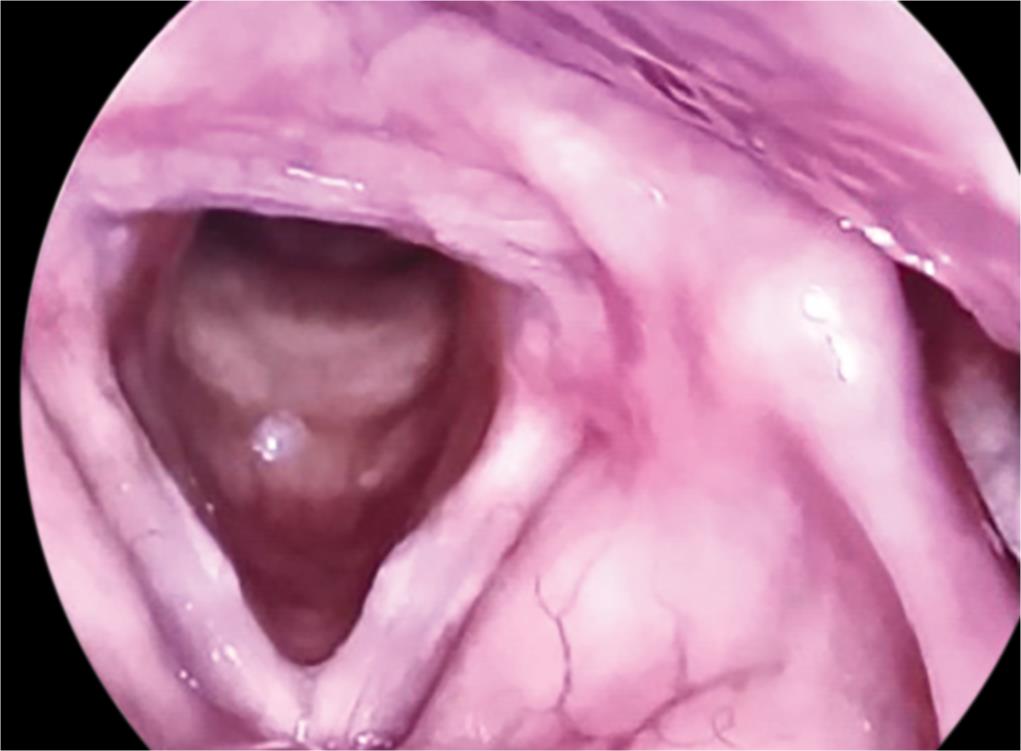 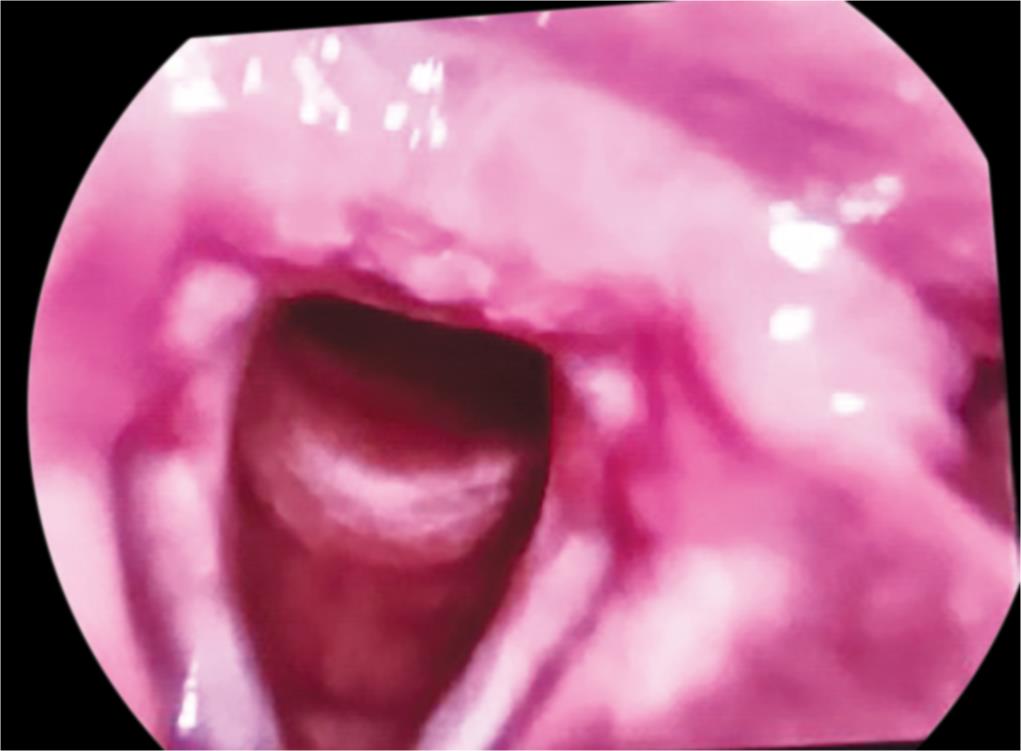 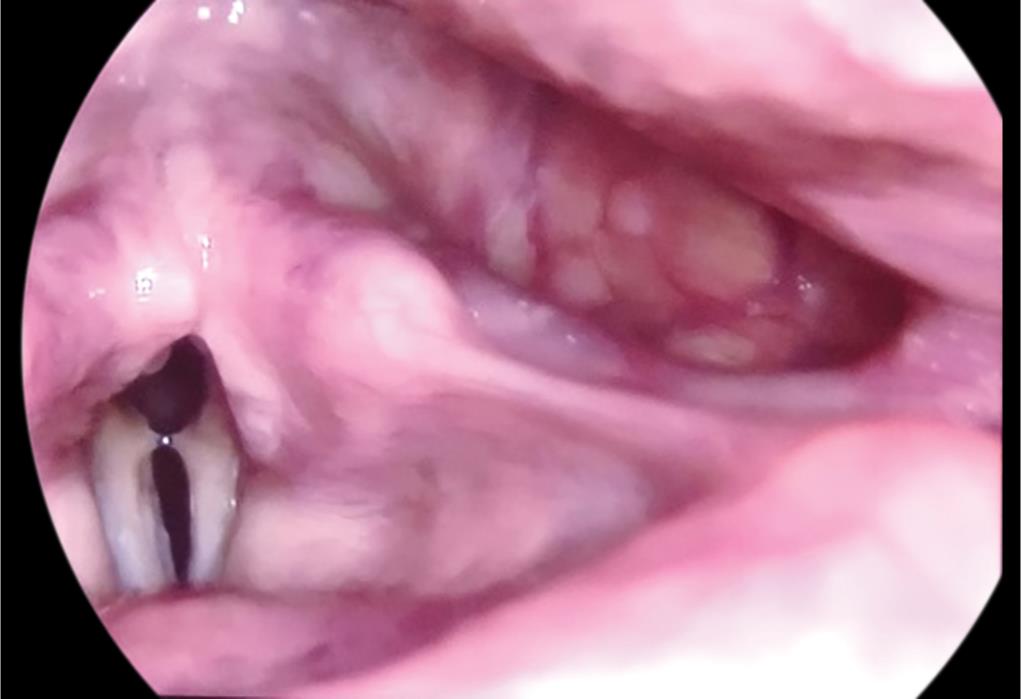 * Improvement in patients after treatment

Videostroboscopy was used to assess laryngoscopic finding and detect changes in the vocal fold due to LPR disease; RFS was done in the same sitting. Out of 50 subjects in the study, 38 had incomplete glottis closure and 23 of them had impaired mucosal movement.

Reflux may be present in up to 50% of patients with voice disorders.2 The ability of assessment of improvement after interval in patients with LPR relies on the clinician’s ability to record laryngeal findings.13 The videostroboscopic assessment in patient with LPR gives a vivid picture of the disease spectrum and diagnoses the changes in the larynx at very early stage. In this digital era with quick availability of previous record, follow-up at frequent intervals gives idea of response to treatment. This study shows that 12-week therapy with PPI along with voice therapy and steam inhalation improves the signs of insults in larynx caused by LPR significantly.